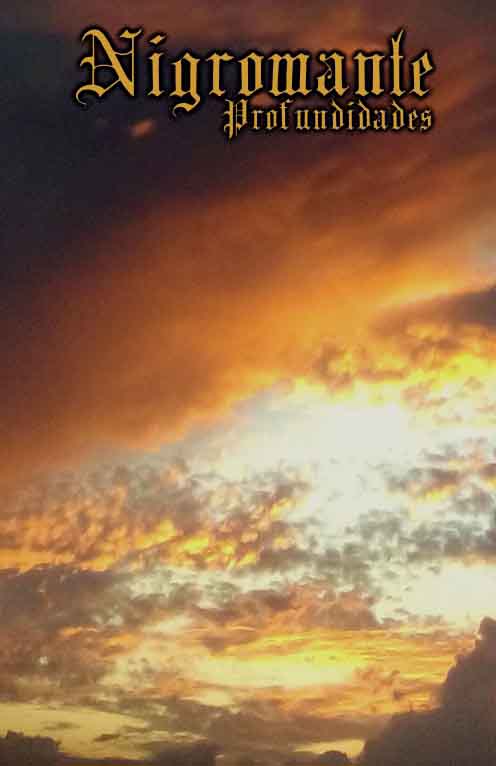 Nigromante creates layers of long synth-produced loops, while leading melodies come in and out of the picture without discernible anticipation or fanfare. These, however, are not introduced abruptly nor do they fall out of place. The subtle techniques of transition can be better described as combinations of different types of overlappings which includes fades and motific linkages. These correspondences and seemingly incidental recurrences bestow upon Profundidades a mechanical center and fulcrum. Nigromante does not allow this to become a hindrance to structural evolution or textural variety. Neither do these constitute the driving force or sole end of the artwork, and instead share with the whole of Rex Ebvleb’s musical creations, be they metal or ambient in manifested form, an impetuous will that drives their sense ever forward. It is that daemon always lurking under the rational and conscious which we here witness.

“While there is no end rhyme in these verses, there is a recurrence of consonants which forms a rhyme in the body of the verse; this repetition of initial sounds is called alliteration.”
— W.E. Simmons, ‘A Student’s History of English Literature’

Profundidades is a study in intuitively produced structures as the keys which open the floodgates, allowing fire from above and the earth below to participate in the stormy evocation of living creations. This sheds light on our understanding that Beethoven’s motivations went beyond the mere breaking of convention, and did not find their origin in the same mundane machinations that would later propel Maller and Schoenberg to equal technical heights devoid of the divine outreach of the earlier master. They lacked the organic fecundity whence the perfectly circular motions of an airy entity could sprout from.

“Spinoza seems to mean by intuition the comprehensive understanding of the truth of a proposition that is granted to the person who grasps it, together with a valid proof of it from self-evident premises, in a single mental act.”
— Roger Scrutton, ‘A Short History of Modern Philosophy: From Descartes to Wittgenstein’

Compensating for a missing high-level finesse in composition in the traditional European sense, an intuitive sense that is clear, sturdy and consistent steps in to obviate any such complaints. It is, like the rest of the music by this artist, an entity invested with the savage and dark personality of its creator. Shortcomings can accurately be considered more like sharp relieves and rough curvatures. These can be summarized as a lack of instrumental balance in the densest parts, or a clash of voices when they are presented as independent lines that reveal a disavowal of counterpoint along with its baroque techniques of balance and spacing.

Nigromante’s ambient is more metallic than properly orchestral, despite the instrumentation. It is also, therefore, closer to the melodies of simple beauty of ancient Greece, Persia and India, with a take on arrangements that would remind one of an electronic-loop Perotin, and farther away from the formalities that start developing after the renaissance. On the other hand, this is music of the 21st century, and it inevitably borrows from all mentioned influences , being postmodern in that sense. It seems to me, however, that it is atemporal in spirit, transcendent in its intention, and ancient in expression.