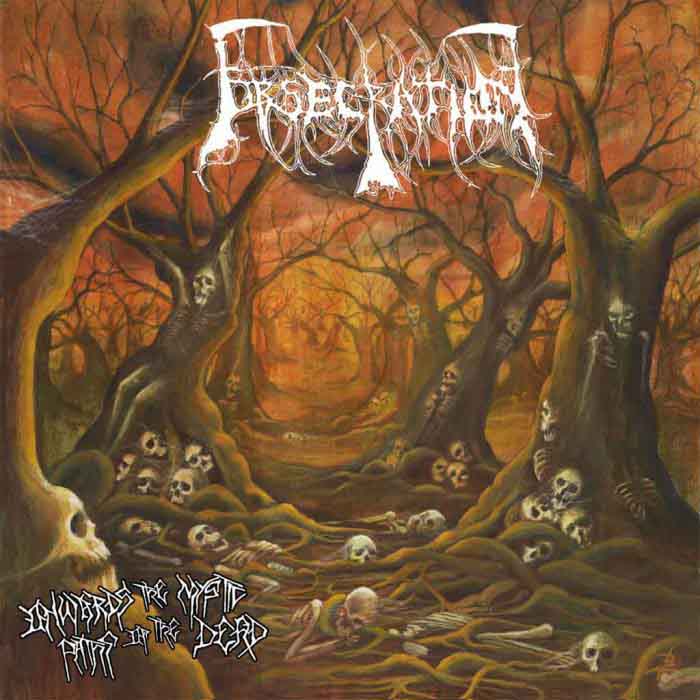 Greek act Obsecration combine speed metal, death metal, and a black metal sensibility for an album that is best enjoyed in the sense of early speed metal, before Metallica showed them how to make continuous compositions with Ride the Lightning. These songs entwine strength and weakness in dominance of the riff.

Those classic speed metal bands who came out of the heavy metal era of Blitzkrieg and Judas Priest never quite figured out the rhythmic and melodic requirements of later speed metal or death metal and beyond, namely how to connect one riff seamlessly to another so that the song did not have to stop for a rhythmic emphasis each bar.

Obsecration show us mastery of three genres on Onwards the Mystic Paths of the Dead, from Incantation-styled fast chromatic rushes to Nuclear Assault styled mid-paced speed metal riffs and atmospheric, oneiric black metal melodic riffs. Songs develop well with a huge focus on lead guitar to state actual theme, something that has been sorely missing in metal lead guitar for the past few years.

What makes this band harder to appreciate comes from its tendency to, like early proto-speed metal bands, play a riff and then come back to a rhythmic bounce before repeating; riffs flow well internally, but are confined within the drums instead of dominating them. If they worked that approach differently, this album would be even more powerful!

However, do not let the kvetching of failed musicians over details bother you. This is a great album full of powerful riffs and song ideas, with an enduring atmosphere of high energy and the classic Southern European melody peeking out throughout the madness.