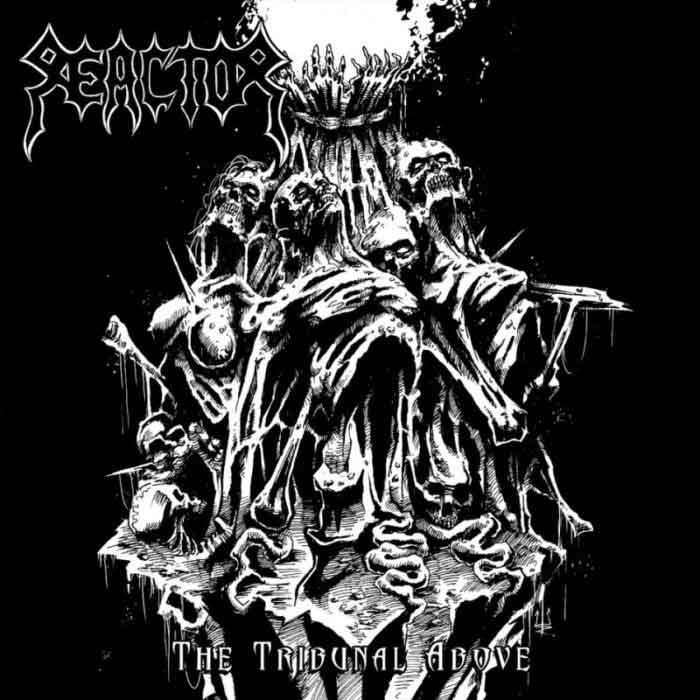 Reactor came from the caveman, skull-crushing school of death / speed metal hybrids. After the way too long intro, the first track “Deformed Personality” is a riff maze of Slayer and Hoffman brothers style riffing that’s a little repetitive and too verse chorus verse but makes you wish kicking prostrate prisoners’ heads off with a running football kickoff was a widely used execution method. They rip off a Sarcofago riff there so you know that would be some sick ancient Mayans playing basketball with human heads sporting execution stuff.

The Tribunal Above manages to keep up this attitude for the entire demo. Yeah all of the tracks are overlong and the riffs all reminiscent of stuff we’ve all heard before but Reactor was a band who had potential back in the day that was never realized you know. Reactor had that devil may care aggression and disdain for human life that modern death and speed metal scenesters don’t. Those poseurs want metal to be like one of those of hug boxes meant for calming down screaming autistic kiddos. Reactionary would want to tie those losers to a log and cut them in half in a saw mill you know. The only exception is that one really out of place sample in the title track and the gang vocals that sound like a high school football team are hootering and hollering about drinking Busch Ice in the locker room after beating up some nerds.

Reactor put some nice melodic touches on their caveman moshing music but it’s still not enough to keep my brain occupied for five minutes twice. The Tribunal Above is a lot like a shittier version of Sinister in that regard. The demos are worth a listen on Youtube but overall The Tribunal Above is not worth tracking down on cassette or buying the 2017 Vic Records CD reissue as you will get bored and offended by Reactor’s compositional inadequacies that they were unable to hammer out in their garage bound four track jam sessions. Hessians might want to give The Tribunal Above a listen below but would be better off returning to such cavemen conjuring up extra-dimensional entities classics as Cross the Styx, Diabolical Summoning, and of course Hate.