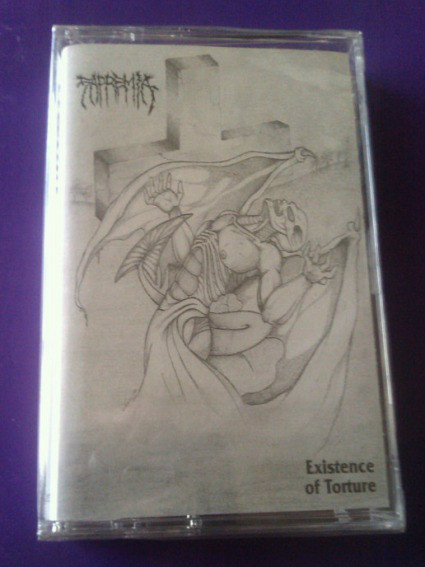 Encapsuling the soul of underground death metal of the American stripe, Sapremia presents in Existence of Torture a fundamental, if not essential, picture of what the genre should be about. This is not to say that all death metal should sound like Sapremia, but that the band is able to elaborate while remaining concise and to the point. Such avoidance of the superfluous, indeed such economy of notes, is in line with the ideal of a minimalist genre of music. A close inspection of metal music in general shows its core to be minimalist by nature, and the purified sub-genres of death and black metal make this a necessity for proper and dignified expression, especially in their truly underground manifestations.

Although there may be a lack of distinction in the music, which is not only an effect of a hindsight perspective, it is important to understand that the aims of death metal, as opposed to those of black metal, was not the individual expression of an original and transcendent outlook. Death metal appeared to be rather a platform where those utilizing its style could properly express visions of terror and horror through the grandeur of a dark mythologizing. Originality of expression would come rather naturally and not as an effort to be distinguished. The more overt efforts in death metal to be distinct resulted in circus music. Therefore, the fact that Sapremia on this early demo does not shine for its uniqueness in no way takes away from its potential.

As a demo, Existence of Torture works in giving us a glimpse of the able articulation Sapremia is capable of. That is, we are shown that the grammar of underground (brutal U.S.) death metal is used proficiently. Nonetheless, the pieces remain very short, in accordance to the quantity of distinct musical statements the band seems capable of at this point in time. Very wisely, four out of five pieces do not extend over the four minute mark; in doing so Sapremia maximizes efficiency and avoids diluting their content. So while these are not death essays of a new era, they are not only an enjoyable listen that does not overstend longer than it should, but they also provide the listener with the most authentic dark experience that death metal has to offer.