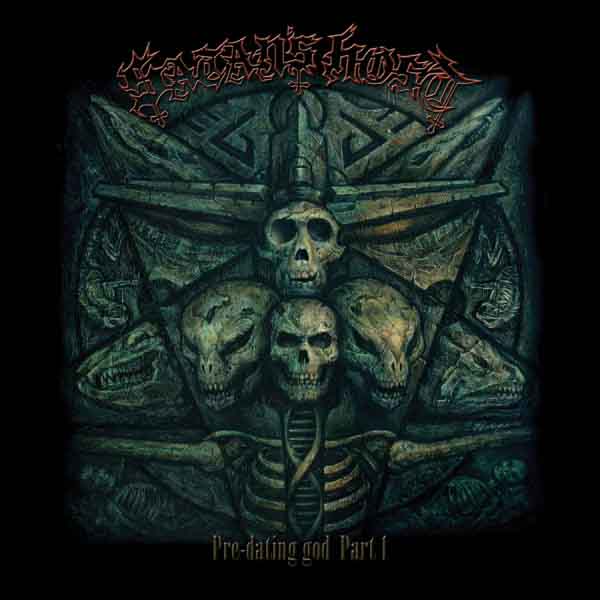 Satan’s Host create power metal with death metal influences like a hybrid of Kreator and Blind Guardian creating music in an Iron Maiden mold. Slight death metal influences intrude on riff construction in some of the songs but the majority are good old-fashioned heavy metal with speed metal technique periodically sparkled with some more extreme expressions here and there.

This two-disc set shows wide variety within those influences. Vocal delivery varies between resembling Kreator, especially on the early songs on both discs, and emulating Nevermore while sometimes adding quasi-operatic vocals in the style of Blind Guardian. The latter presents a fairly typical attempt at a democratized concept of this vocal style, which is both clueless to the subtlety in the original and what makes it challenging to compose as music.

This double-disc album displays three types of songs which are distributed evenly, as in a mirror, on both discs. The first group occurs during the earliest two or three songs on either disc and these songs resemble Kreator and in that spirit display an inclination towards riff-oriented writing with little concern to where the narrative of those riffs leads. The second group of songs comprise tracks three and four on both discs as well as track five on the first. These leave the Kreator vibe a bit in order to favor a more typically Iron Maiden feel. Here we can most appreciate the juxtaposition of the speed metal riff with the monolithic heavy metal chorus. This is not a fusion of the two, but a copy-paste of either style to fill in different functions of the same song. The third group of either disc is found on the last two or three tracks and resembles what is commonly called “progressive” heavy metal, most closely approximating post-Powerslave Iron Maiden.

The progressive heavy metal tracks may be where this release loses the most points. Slow intro, blocks of verse-chorus, then soloing-develoment section followed by incessant hammering of one idea with little creativity (like this harmless turd from Iron Maiden). Following this same Steve Harris brand of prog-heavy-metal trend we see a lot of pointless repetition with sing-along chorus (cornholish) abuse (e.g. “We’re blood brothers”). Unlike Iron Maiden who are functioning within one music style, Satan’s Host has a hard time shaping this into something with anything remotely sounding like a build up or a development that encompasses the whole song because they seem to be too busy juggling around with the show-off speed metal riffs and over-the-top Heavy Metal choruses. While riffs and are often developed and moved forward and transitions are always fluid and seldom abrupt there is always a lack of convincing development. It is present, it is just not credible and sounds tired. Songs often sound like they just continue but do not necessarily reach any objective or make a statement of what it all meant.

While the mixture of styles is both comforting and challenge, it does not quite “gel” in the way it would need to for a first-rate metal album. The Blind Guardian influence brings a penchant for incessant high vocals and accompanying guitar leads which double the intensity of screeching sounds. This can be found throughout the whole album alongside a feeling of everything being cranked up to eleven most of the time, which is precisely what I find unbearable about Blind Guardian (who at least try to introduce unconvincing melodramatic acoustic interludes which only drip with cheap cheese). This is coming from a fan of old Rhapsody (of Fire) and debut-album Pagan’s Mind, bands who knew how to handle cheese with a delicacy which invests a feeling of care and purpose (especially the former at their peak) to the melodramatic work in question. Similarly, many of the “progressive” metal parts fail for the same reason that Iron Maiden has had trouble elongated NWOBHM into epic song structures: the characteristics of the heavy metal genre are assembled to support choruses, the telling of a story and accommodate climaxing solos. When you repeat them ad mortem they lose the impact they are supposed to have because the listener gets exposed to them beyond their utility. And adding a soloing section in the middle which is harmonically stagnant, as per the requirements of the genre, only increments the dreadful sense of sickening bloating. It is thus that the NWOBHM in Satan’s Host fails. This in turn makes the speed metal riff-driven music lose its impact and drive. Finally, the death metal component is not used prominently except to spice up and add to the intensity.

Each music piece must and should be judged on the basis of what it is trying to accomplish. To be more specific, on two different points: first its goal, second its means to that goal. The goal must be distinguishable. A point must be made that genres, as compromises regarding form as reflection of deeper intentions, have natural and intrinsic limitations. Following this train of thought, it seems to me like the main reason for the pointlessness and mendacity of this music lies in the mixing of NWOBHM, speed metal and small amounts of death metal flavor. There is a reason why these are different genres and it isn’t just because “some people like to box and tag everything” like the ignorant rabble who do not understand the concept of form and its purpose would like everybody to believe. These failings leave Satan’s Host short of finding an artistic voice to express what obviously are passionate ideas, causing this listening experience to fall apart half-way and not motivate the hearer to pick up the pieces and try again.