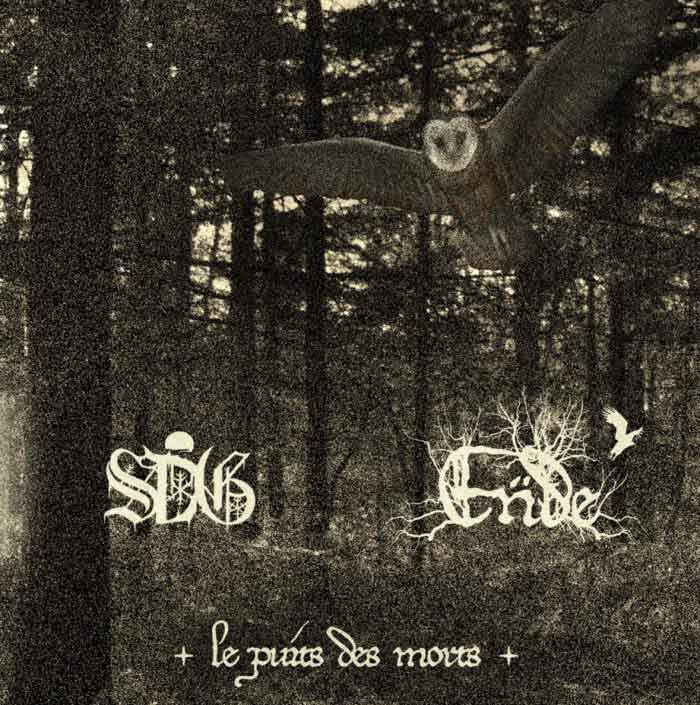 Densely multi-tracked, long-form, tremolo-picked lead melodies take minutes to unravel over rhythm guitars progression power chords. The lead riff phrasing is so drawn out that it enables Sorcier des Glaces to attempt multi-part songs that would come across as too disparate with other riffing styles even if melodically related but here manage to convey the vastness of the natural universe. In fact many of the riffs are quite similar to ones on many of the bands’ earlier albums but Sorcier des Glaces’ almost-never-ending ability to effectively construct novel compositions in the same style using their trademark riffing style and progress them all to fitting conclusions is commendable. The four brand new tracks on Le puits des ports are as good as anything on North, frequently displaying a thankfully expedited urgency. The overall mood of an uncaring natural world reminds me of the following snippet:

The universe is monstrously indifferent to the presence of man.
– Werner Herzog

Ende’s second half the split is noticeably weaker. Extended ambient keyboard bridges show the band has not come around to the same anti-keyboard epiphany as Sorcier des Glaces did years ago. Too many of their riffs and melodies are essentially “me too” riffs you have sworn you have heard before played by certain Swedish metal bands from Gothenburg. A lethargic cover of Bathory‘s “Call From the Grave” and seven minute ambient outro do Ende no favors in comparison to the Sorcier des Glace’s music on the first half. Ende’s work deserves a “C” grade for barely competent as Stephen Cefala would say.

Le puit des morts is worth listening to but illustrates the problems behind almost all split releases: one band’s work is always superior or more dedicated than the other’s. Nobody will listen to the phoned in second half more than once. If this split was short enough to release on vinyl, the record simply would never be flipped over and Ende’s work on the B-side would rightfully languish out of sight and mind instead of necessitating the listener mash a button to restart the CD or digital playlist.