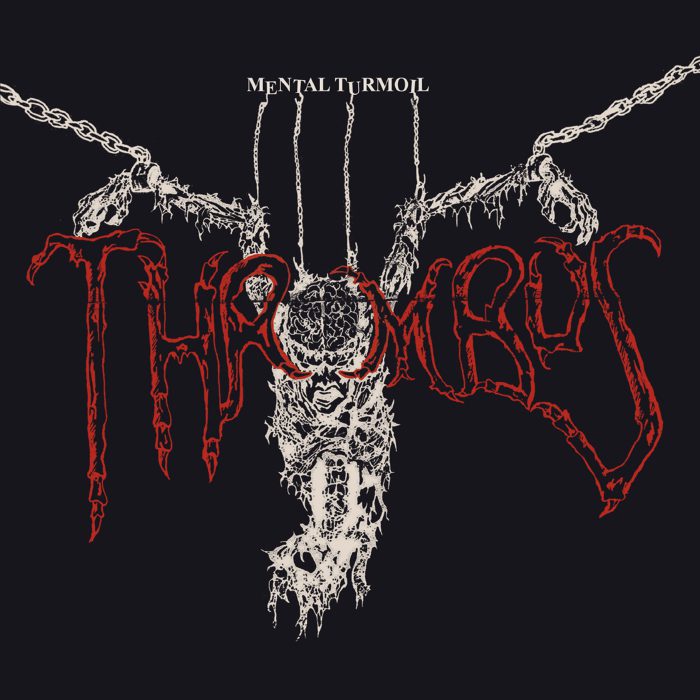 The present album is an example of undergorund death metal that, while humble and rather representative of the genre, does an excellent job of crafting good, concise music that delivers a strong experience effectively. Mental Turmoil shows us a band that has not liberated itself and is thus at the mercy of stronger influences, such as the more pensive side of U.S. death metal meeting the aggressive side of the more melodic European flavors —and one can hear echoes of an early Obituary somewhere in here, as well as other voices. Thrombus concots its own little mixture of influences, even if there is nothing quite original in it.

Ideas interrupt each other in the manner of the lesser but proficient bands of the time, but only after they have been given due attention, which makes the sudden transition wanted and apt, rather than a poor articulation. We can also hear quicker sections of music that feature rapid transitions between frenetic riffs, these invariably signal bridges and preparations in this strand of death metal. They provide a counterbalance to the more ‘enunciating,’ riffs that serve to anchor the music and give it a strong thematic context that the listener can identify clearly. Said enunciating riffs do not need to be slow, but they are definitely ‘singable’ (cantabile), even in their coarseness.

In terms of development, the most crude of death metal structuring methods is utilized: that of the riff salad. A direct effect of the riff salad is that the beginning, the middle and the end of songs do not sound particularly made for that place in the narrative. Rather, the resulting structure is the result of a savage cutting and pasting that follows a bestial sense, and is thus opaque to attempts at rationalizing it. Like underground punk, this simplicity in madness is at the center of its particularity, and it feeds into what allows it to transmit its sense of alienating brutality.

All in all, Thrombus exhibits a satisfactory dominion of the death metal language, and gives us a historical snapshot of the era. We can easily place Thrombus in the scale of quality alongside the likes of God Macabre The Winterlong (1991), while it does not reach the twisted peaks reached by the sure footsteps of Carnage Dark Recollections (1990). All that being said, one feels compelled to point to a classic like Demigod Slumber of Sullen Eyes (1992) as the supreme example of riff-oriented modal death metal oriented towards ‘moments’ rather than strong narratives.

Thrombus Mental Turmoil was reportedly released in 1993 in tape format, and limited to 100 copies. Fortunately for interested listeners, La Caverna Records [1] has recently re-released the album also in tape format, limited to 400 copies, and has made it available for purchase and unlimited streaming on bandcamp.

[1] Death Metal Underground has declared support in La Caverna Records, for as long as they continue enriching the underground as elitists: https://www.deathmetal.org/news/la-caverna-records-underground-label/

Death Metal Underground is calling for writers (actual or in potential) to join our team. If you are capable and willing to contribute weekly or more often to our growing encyclopedia of underground metal, DMU Needs You!