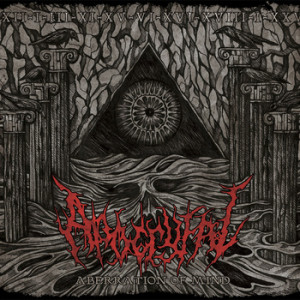 This new band synthesizes faster death metal with the mid-tempo pacing of classic Swedish death metal. That method gives their songs a grind effect which, combined with the rhythm and melodic hooks to their chorus riffs, create the power of heavy metal balladry within simple death metal.

Aberration of Mind is a solid EP which gives a glimpse of where this band is headed. Apocryfal generally make a good synthesis of this although at times when they are unsure of how to proceed they fall back on bouncy heavy metal downstrum riffs, which at this point sound not only dated but incongruous. However the majority of their riffs would fit on a later Vader or Fleshcrawl album.

Strong vocals understate their own case but let the guitars carry the day, and percussion shadows guitars as well. Moderate technicality avoids both showing off and shortcuts. If they develop this another level and stay old school it could allow them to create an interesting album in the future.