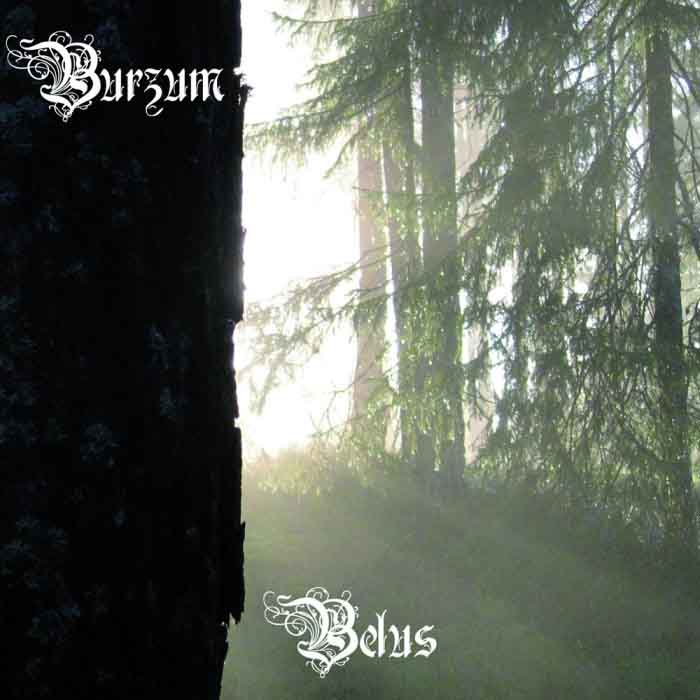 Article by David Rosales; read yet another (negative) contemporary review of Belus here

After an incursion into ambient metal that lasted for a few albums, Burzum was seemingly trying to make a comeback to metal instrumentation. But appearances can be deceiving, and what seems like a failed attempt at creating streamlined metal music may be, in fact, an attempt at riffing-up ambient music. There is also a hint that it is packaged into an integral release that has to be listened to as a whole. This does sound an awful lot like the premise of post-rock, and while there is a good deal of wallpaper repetition, there are also plenty of good ideas in what is the closest heir we have to Vikernes’ seclusion.

The old DMU reception of the album when it had just come out is spot on in its criticism, but much may be added that redeems this understated album. A very clear line of evolution can be traced from Det Som Engang Var through Hvis Lyset Tar Oss and the anti-black metal ambient expansion of Filosofem to Burzum’s 2010 release. For all intents and purposes, an album like Belus is the next logical step. That it cannot harness the energies of black metal while it attempts to spread like synth ambient is proof of the impermeability of distinct genres.

This shaky, middle-ground positioning was resolved marvelously with 2013’s Sôl austan, Mâni vestan, whose incomprehension by black metal fans shows it as a next filter in the practical evolution of transcendental metal as it maintains its ideals. The filters before them can be seen in the commencement of different underground metal genres, with Black Sabbath being the first obscure revolution, Slayer and Metallica on their debut leading the second, and the waves of speed-going-on-black as intermediary steps towards the third explosion of death metal, which in its technical fetish gave way to the more musical black metal. The next great purge takes place after 1995 as several of the best black metal musicians lean heavily towards minimalist ambient-focused projects, which in some cases turn into affairs that are more electronic than metal in instrumentation (Beherit’s Electric Doom Synthesis is one of the crown jewels of this very select group).

Weakened as it is in its most objective sense, the soft, layered and simple cadences and droning melodies unique to Vikernes’ mind are still more full and less candy-coated than the likes of Drudkh. And where, in Belus, the music seesm to drone on, the choice in length is never as much as the likes of Sunn O))) so that it falls completely into the background. Hvis Lyset Tar Oss was a trip to another dimension, each moment pushes forward, but the next album was a trance with subtle pulsations and bumps, breathing in and breathing out in a quality that cannot be measure quantitatively but qualitatively at an abstract level, admitting no materialistic distinction. The repetition scheme here is a compromise and application of what was learned in Filosofem, relying on a certain quality of endurance that Vikernes’ simple but multi-layered riffs focus on and uniquely shine for.

At worst, Belus is solid ambient music played on suboptimal instrumentation, and at best, a unique chance at perceiving these landscapes through metallic lenses which distort and bring to the fore particular contours and colors. When positioned at the right place and at the right time (having the right mentality), the listener may find himself submerged into dense forests, fuzzy with the brume of unreality. The vision that Belus presents is not that different from Burzum’s early efforts, but where the quick underground fan may detect watered-down content, others may see a matured and spiritually refined thinking.

This is not objective music, this is a secluded path for those who have digested Burzum’s music beyond its atomic particles and into the very essence, flow and nature of it. This fourth filtering-out of profane minds certainly leaves most behind, and though these words may seem spurious, those with a balanced and logic mind, a strong and idealist heart, and an avid curiosity may find themselves on the right path to this shrouded grove.