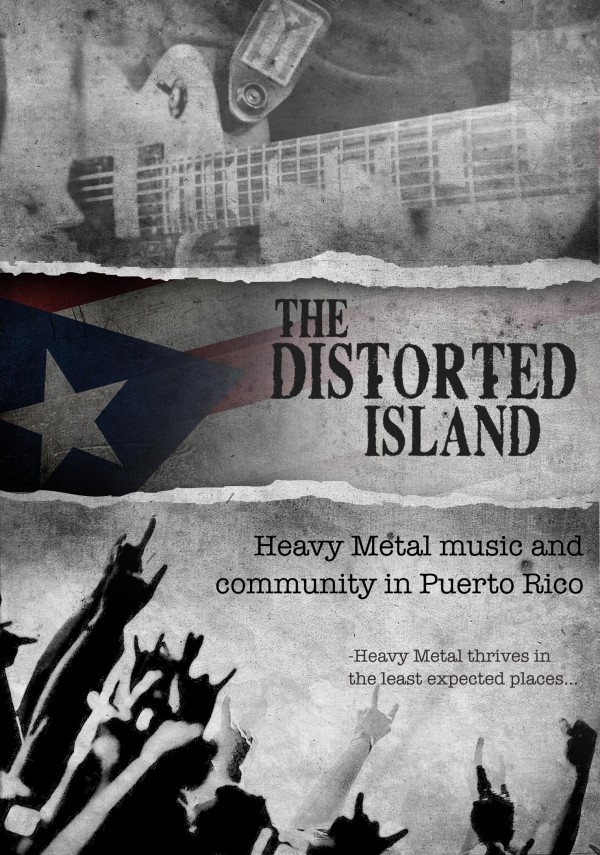 Artwork for a new documentary about Puerto Rico’s metal scene by the Puerto Rico Heavy Metal Studies Group, The Distorted Island: Heavy Metal Music and Community in Puerto Rico, makes its appearance today and in this blog. According to the creators of the film:

This upcoming documentary explores the emergence and maintenance of a metal scene in the Caribbean island. The documentary explores how local bands have survived for 30 years via strong community ties, while also highlighting the cultural and historical challenges faced along the way. Local artist Kadriel Betsen, a digital artist and guitarist for the extreme metal band Humanist, developed the artwork. Nelson Varas-Díaz, Osvaldo González, Eliut Segarra and Sigrid Mendoza compose the research and filmmaking team. Dr. Nelson Varas-Díaz is a metal fan and Associate Professor at the University of Puerto Rico who has led the team carrying out a research study on the local scene. The documentary will see its full release by the end of 2014.

When asked about the artwork for the movie poster, local artist Kadriel Betsen said the following: “This artwork attempts to capture the very essence of Puerto Rico’s Heavy Metal scene. A scene where a particular musical taste influences the way we perceive and express our culture, and where our culture enriches and influences the way we create music. These two powerful factors gave birth to the Distorted Island…”