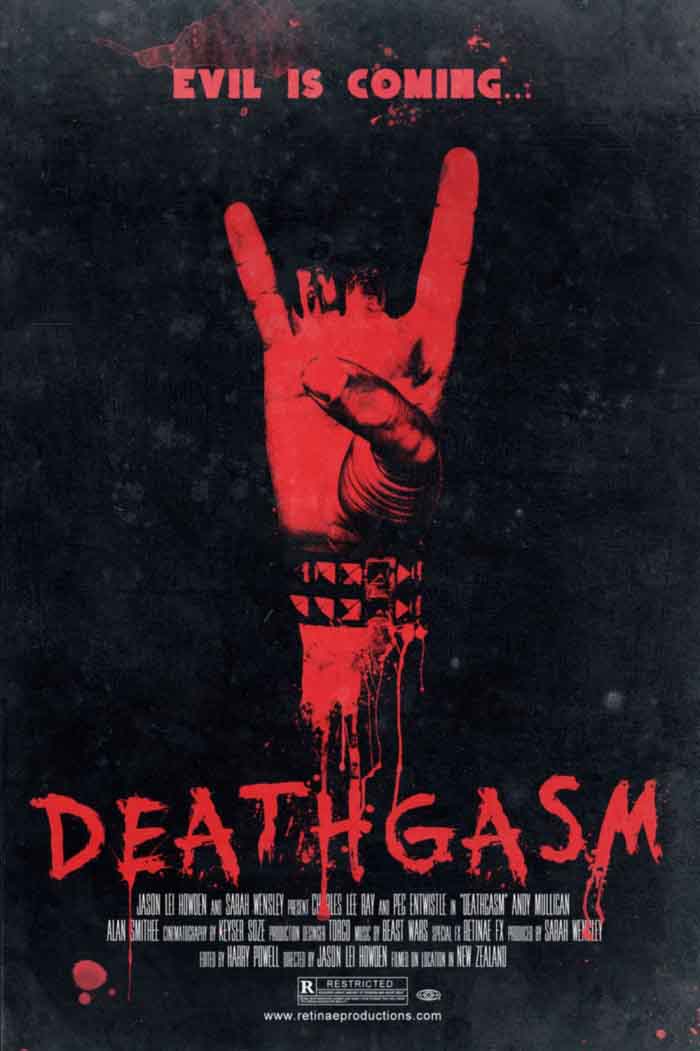 The combination of metal and horror films presents a challenge because you cannot have two strong forces without having one trigger the other. In Death Metal Zombies (1995) it was a recording send from an on-air contest; in The Lords of Salem director Rob “Zombie” Cummings features a terrifyingly enigmatic piece of music that, played over the radio, invokes demons. In Deathgasm, a downtrodden teenage metalhead in New Zealand uncovers an ancient hymn for summoning a dark deity, and launches (nearly) the end of the world.

As with all in the genre of New Zealand horror, Deathgasm features a tight integration of absurdist humor with its horror plot. Like reading Mad Magazine, watching this film requires the viewer to be attentive to background details for extra laughs, but there are also outright comedic lines delivered at pivotal points in the plot. Much like the best underground films of the 1980s, Deathgasm also serves as a revelation of society from a metalhead’s point of view: boring, pointless, disorganized, with people already possessed by ideas before the demons even get the glimmer of personality transubstantiation in their beady little eyes.

Once having accepted that the plot will revolve around a teenage metalhead, his band, and an ancient curse, the viewer can proceed to enjoy this film for what it delivers: buckets of gore, wry laughs, and an honest sense of terror for these characters caught in an absurd world gone even more nonsensical. Protagonist Brodie just wants to make it through high school and away from his horrible foster parents, maybe picking up axe-slinging sweetheart Medina along the way, but his world has collapsed… and then the demons arrive.

Tightly scripted, and filmed with an eye for the natural beauty of New Zealand as well as as a pervasive creepy suspense that makes ordinary settings look threatening and surreal, Deathgasm applies perhaps the lightest touch working metal into the film as both topic and soundtrack, immersing us in the world of the metalhead facing a demonic horror that, like the adult world around him, is both incomprehensible and threatening. Look for the classic metal tshirts and other details of the underground metal world.

Unlike many horror films, Deathgasm follows more of the adventure movie plot (think: Die Hard, the apex of the genre if you ask me, which you didn’t) in that it involves humans attempting to surmount disbelief and low self-confidence to take on supernatural forces. Its characters, while caricatures, also reveal some of the truth of our varied social roles in this wonderful modern society. Rising to the inevitable conclusion, this film spills buckets of blood and guts and makes its audience identify with the struggle for survival against forces beyond our control.