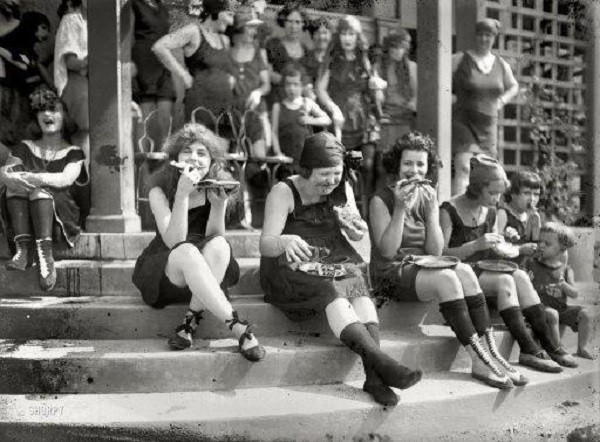 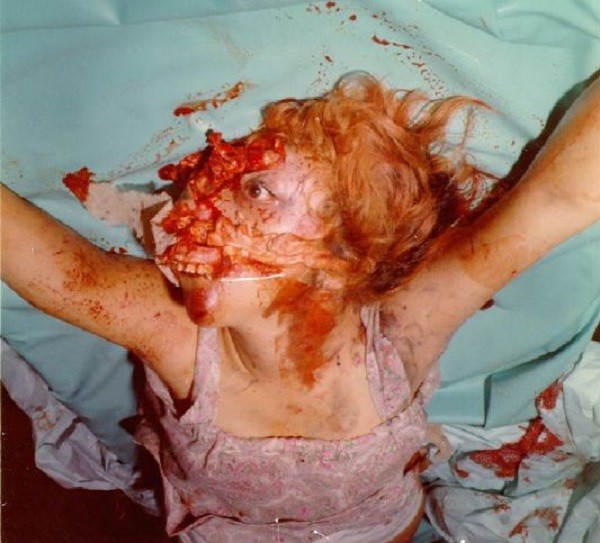 #Metalgate began with a passive-aggressive attack: so-called “social justice warriors” decided metal needed to reflect the SJW ideology, and so moved into media, academia and bands to write metal that used their worldview like a propaganda weapon. Then they began complaining that they were victims of intolerance.

This was related to the previous issue with #gamergate, where SJWs moved into the gaming industry and when their mediocre “contributions” were not recognized, claimed discrimination was the cause. As usual, this was a power grab: under the guise of being victims, they claimed the right to bully others for not having the “right” opinions.

Now, it seems, the bullies are crying out as they are hitting us because feminist writers are claiming harassment from “the internet”:

Part of what’s different now is the existence of organized misogyny, with groups of men who are angry at feminism gathering under banners such as the Men’s Rights Movement and Gamergate, a diffuse network of video-game enthusiasts furious at attempts to curb sexism in the industry. Back in the 1980s and 1990s, “the mainstream culture of the media was more anti-feminist. That was when you had all that ‘feminism is dead, all women just want to get married’ kind of stuff,” says columnist Katha Pollitt, my colleague at the Nation. “But the men’s rights people, Gamergate, that’s new. There is this cadre of incredibly enraged men who have all found each other.”

As in #metalgate, these people have made a career of intruding where they are unable to compete, blaming other people for their lack of success, and then trying to cultivate an audience of other people who have failed. This is a typical strategy for taking over a group and it is known to parasites everywhere, most notably the “think of the children!” politicians and the advertising marketers who convinced people to like abominations like low-fat cheese, lite beer and tofurkey because “it’s healthier.” All lies, by liars, to seize power.

In the meantime, organized SJWs from Metal Archives continue to insult and belittle those who disagree:

@soakrates Yeah so I saw. Once again it's all ANUS's fault. Bunch of clowns, all of them.

At what point do people wake up and realize that #metalgate, #gamergate and the ongoing failure of our media have a common point of failure, which is the substitution of “social justice” for a detailed look at reality?

The only reason the SJWs and complaining, by the way, is that people are fighting back. Adria Richards heard a developer joke about a dongle and his friend make a joke about “forking” someone else’s project, and decided she was oppressed, so she snapped a picture and tweeted it with a typical SJW shaming/bullying message:

Not cool. Jokes about forking repo's in a sexual way and "big" dongles. Right behind me #pycon pic.twitter.com/Hv1bkeOsYP

Her only complaint is that, as The Guardian reports, she got owned when people pushed back against her passive-aggressive victim-mentality bullying, instead of pitying her as she thought they should have:

Someone launched a DDoS attack, which overwhelms a site’s servers with repeated requests. SendGrid, her employer, was told the attacks would stop if she was fired. Within hours, she was fired.

‘‘SendGrid threw me under the bus,” she later emailed me. “I felt betrayed. I felt abandoned. I felt ashamed. I felt rejected. I felt alone.’’

They attempt to portray those of us who oppose them as “racist,” “homophobic,” bigoted, “sexist,” and other terms with no fixed definition, when really our statement is a middle path: we do not accept the reality-controlling language of either side of the debate. We look at reality as reality itself, or as close as we can get, instead of hiding it in all these neat little containers which tell us what we can think and what we must fear.

The more SJWs have made it into media, the more media has declined, mainly because it reports propaganda instead of what concerns normal people trying to live normal lives. As this image from the AEI shows, newspaper revenues are in free-fall: 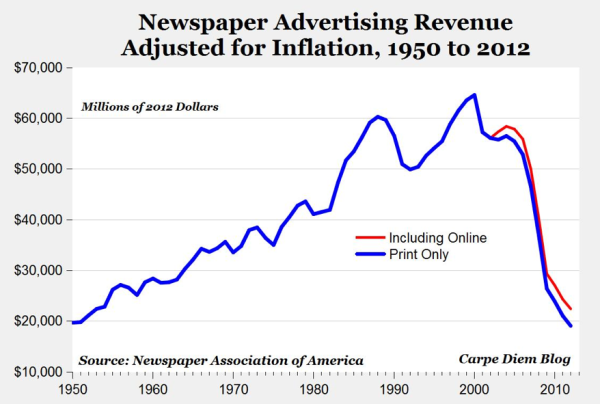 This is the same phenomenon we see in metal which is that while there is still a huge audience of indie/punk rockers who have showed up after 2001 to take advantage of this new territory to conquer, metal media is stagnant and declining, as are the new genres of metalcore and indie/shoegaze-metal/punk, mainly because like SJWs they are one-note shrill voices that seek to bully us and control our thinking, and have nothing to offer musically or artistically. Their message is always the same, and not surprisingly their music sounds the same, about like Christian metal or those annoying white power bands, come to think of it.

SJWs are death to metal and death to media. #metalgate has pushed back and now they complain about a victimhood of their own creation in the hope that uninformed people will take pity on them, fight back against those fighting back against the invasion, and by that act let the invasion succeed. Spread the word: SJWs are invaders and bullies whose complaints are hollow and whose every word is a lie.

For those who care about metal, it is time to stop supporting SJW-friendly Metal Archives, which has been distorting what is viewed as metal for over a decade in order to enforce its own agenda. A boycott is not enough; they have abused their position as journalists, and it is time for Metal Archives to be destroyed along with all other SJW media. These people are a cancer and they are bullies and until they are removed, we are all under threat of them attacking us.