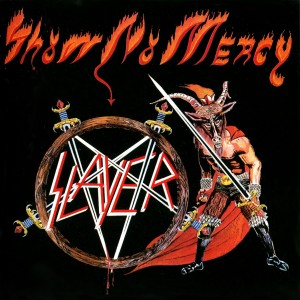 Slayer’s Show No Mercy turned the metal world upside down when it hit the record stores. Keep in mind this was back in the 1980s, so there was no instant effect, more like a quick ripple as it took people time to learn about the album, get to the store to buy it, dub it from a friend, hear it on a weekly radio show, or get mailed a mix tape.

At the time, the world was just awakening to the possibility of speed metal, which grew out of American bands taking the best of NWOBHM, like Blitzkrieg, Satan, Motorhead, Witchfinder General, etc. and combining them, adding in the attitude of hardcore punk and its rhythms. However, speed metal had a defining characteristic, which was the sharp sonic edges produced by the use of the muted strum.

Slayer took another approach, also derived from hardcore (mainly Discharge), which was the tremolo strum. Instead of producing sharp edges, this produced fuzzy columns of sound like an organ or other instrument with huge sustain. The result was that longer riffs could be created and could be relatively independent from the drums. The song structure opened up with guitar as the lead voice.

This innovation basically created all of underground metal. When Slayer was combined with Bathory and Hellhammer, both black metal and death metal emerged. Black metal was a more ambient variety, where death metal was more structuralist, but both used the same ingredients brought about by this combination, namely the techniques and attitudes of these three bands.

However, Slayer’s invention was what was able to unite the long-form song structures of Hellhammer and the atmospheric approach of Bathory into a format that could expand. Immediately recognizing the power of a style of music which put riff changes before harmony or conventional song structure, Slayer expanded their work beyond the verse-chorus using their famous pattern of introductory and transitional riffs.

A new science was born. It was opposed by many in the speed metal world, since it offered competition to what those musicians were doing and signaled the end of that paradigm (speed metal officially hung up its metal union card in 1991, five years after Slayer took this style over the top with Reign in Blood). Others saw the possibility in this new style.

As a result, when you hear metal music today, you are hearing an inheritance from Slayer. Even outside metal music the idea of a guitar or keyboard leading the drums has gained traction, which breaks out of the somewhat rigid format of rock/pop and gives artists more options. It’s not entirely surprising that Slayer burst onto the scene only ten years after the groundbreaking ambient of Tangerine Dream and Brian Eno/Robert Fripp.

Critics have never really understood how to analyze Show No Mercy in part because the album links together so many influences. Iron Maiden lurks in the chord progressions, Discharge and GBH in the technique, Motorhead in the rugged riffing, Kiss in the somewhat grandiose theatrics, and Judas Priest in the conceptualization of riff structure. But what holds them together is this metal first, which is the tremolo strum and its implications for songwriting.

The “First in Line” series celebrates the metal bands and albums who did something important, and did it first. It’s like an inventor’s award.