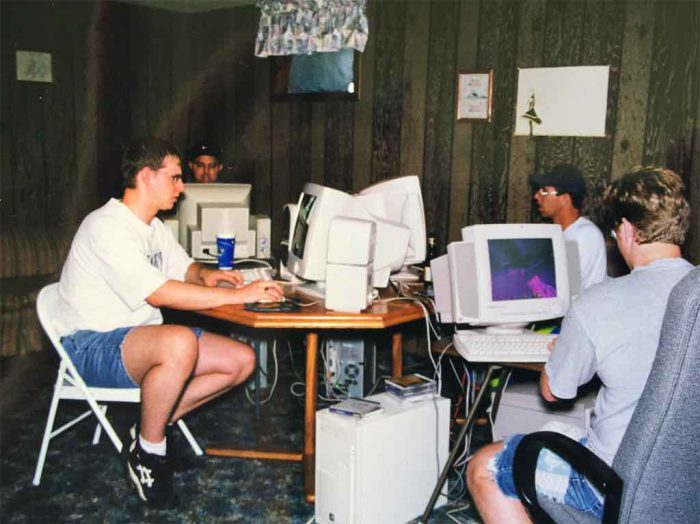 Maybe you are one of those people who can hear enough audio quality to realize that the Fraunhofer Layer III MP3 Codec is far superior to plebeian alternatives like LAME. Maybe you are not an Apple user because your blood runs red and you do not want to join a cult based on twee interfaces and brightly-colored plastic objects. This means you are stranded in the world of practical people who want to use an MP3 player like Foobar2000 or the renewed WinAMP, a real codec like l3codecp.acm, and an audio extractor like Exact Audio Copy (EAC). Digital downloads are for wimps!

END_OF_DOCUMENT_TOKEN_TO_BE_REPLACED

The Hessian guide to the proper care and maintenance of your records and sound equipment.

Throughout the years, I have met many hessians that, despite the passion for metal music that is so common among them, haven’t yet learned how to take care of their records and sound equipment of which they depend so much.

Being part of a culture means, among many other things, maintaining the material manifestations of that culture. We get stronger, as individuals and as a culture, by learning good habits and applying our energies towards the preservation of the things that we care the most.

So it is imperative for us at the Hessian Studies Center, in our efforts to improve the well-being of metalheads worldwide, that we provide our readers with a comprehensive guide to the proper care of your music records and reproduction system.

Compact discs are by far the recording medium of preference for hessians of all ages and inclinations, and it is easy to see why: it is small, so it’s easily transportable and manageable, provides great, clean sound, and doesn’t degrade with use since the reproduction of sound doesn’t involve the constant friction of a needle or a cassette tape head. Of course, this medium has its detractors, and much more in the metal culture than other music-oriented human groups, for reasons we’ll explain later on.

Despite its advantages, CDs are very easy to damage if mistreated, so you must take the following cautions:

Also, keep in mind that straight scratches from the center to the edge of the CD are much less likely to cause your CD to malfunction when compared to scratches paralel to the circumference of the disc, for obvious reasons – a CD reproduction system can afford to lose one or a few bits without any problems, but not several of them, in which case the information (audio) might be impossible to read by the equipment.

To record a sample from your recordings, compilations and rare albums you know you won’t easily get otherwise, CDRs are very practical. They are also cheaper than they were years ago, but the average in price have lowered in great part because of cheap quality CDRs flooding the market. In choosing your recording medium, pick a good brand of CDR: Sony, Zykon, Kodak, Mitsui. Buying the CDRs in packs of 20, 25 or 50 is cheaper in the long term as well (less value per unit).

Make sure you buy a good brand of CD burner. Favorites among the public are Asus, Sony, Samsung, LG and AOpen.

For recording, use a good software such as Nero Burning Rom 9. Always record your CDRs at the lowest speed possible. Preferably, you should never burn the disc faster than 4x of speed.

The bad combination of low quality CDs, cheap CD burner equipment and excessive burning speed may cause your CDRs to fail to reproduce on the short or the long term, so be sure to spend a little more and be a bit more patient. That way your burned CDRs will last for a long time (+5 years, at least, if you pick a good brand).

For storing the CDRs, you can use either a jewelcase or a slim case, the latter tending to be more practical if you have way too many CDRs. In the last case, it is also a good idea to have an Excel sheet of all your recorded CDs so you can find them, since you can’t easily label the side of slim cases.

Care tips for CDs are equally applicable to the recorded sort. Another thing that should be considered, though, is the damage that heat can produce to the special chemical properties particular to a CDR. So, you should never place a CDR in direct sunlight. More info here.

To label your CDRs, use a water-based marker with a non-sharp tip.

Not much to say here. Preferred audio formats for PC playback are mp3 and FLAC. The latter allows one to keep a CD quality, lossless reproduction of the recording, with its downside being a lot heavier in individual file size than mp3. Other formats, such as .ogg, are also preferred by certain digital audio aficionados.

One thing that should be mentioned, though: if you keep a large collection of digitalized music, it is convenient to store them on a separate external hard drive in case your computer crashes or fails, like they do so often these days.

Some links on the subject you may find useful:

Members of the metal culture have a natural preference for analog formats, such as tape and vinyl. Other musical subcultures share this inclination with headbangers, whether out of audio resolution considerations (electronica fans seem to be of this camp) or simply out of an indescribable mystic feel that the listener captures out of enjoying or simply owning an album on analog format. I’ve seen that most hessians prefer this for the last consideration, that is, the special aura it invokes.

Not that there aren’t any practical considerations for preferring analog over digital formats. Tapes, for example, are sturdier than CDs, which give them an advantage on physical resistance. Besides, tapes permit multiple recordings as long as its sound quality lasts (which depends on the type of cassette…more about that later).

As you all most know, the main disadvantage of analog formats is their weariness. Since sound reproduction in their case involves the use of either a head or needle which is mechanically attached to the source of the recording, the latter slowly experiences a wearing of the surface layer where the audio is recorded, resulting all of this in a progressive loss of sound quality.

Yet, as with CDs, there are certain tips that can help increase the lifespan of your tapes and CDs in order for them to provide the maximal amount of listening time and enjoyment.

Tapes were (and still are, for some) tremendously practical for the active listener, in great part due to its portability and endurance. Besides, who didn’t start out on its metal journey without a Black Sabbath or Iron Maiden cassette on one’s walkman? Few, I guess.

The LP and EP formats are a favorite for hessians and the one that carries most “mystique”. A lot of it has to do, in great part, with nostalgy: after all, in the classic era of metal the LP was THE format for albums that got released at the time, and most cover art was done specifically to fir into the large sleeves of LPs: if you want examples, you should look into Iron Maiden’s, Morbid Angel, Carnage, Dio and many, many others…the list goes on and on.

However, this particular medium requieres a lot more care to it, as vinyl is a very delicate material and the discs have some significant weaknesses that, with the arrival of the compact disc, were no longer an issue for listeners.

We won’t stop here to review all kind of sound reproduction systems available in the market, for that would take many lines of text. A general rule that can be said about sound equipment shall, instead, be mentioned: that is, when you buy a new piece of equipment, give it a try at the store. Bring one of your CDs and check for the following:

The ideal would be for you to buy one of those multi-unit hi-fi equipments that can be mounted on top of each other. Those usually are the best, for the reason that you can buy each unit from different sources and assemble your own, personalized system.

Your system needs to be dusted periodically, optimally once a day, to prevent particles of dust to reach any delicate part of the equipment, such as the lens from the CD player or the tape head. I’ve found that keeping a disc inside the CD player and a tape inside the deck while not using the stereo prevents this, in part. Also, be sure to put a piece of cardbox on top of the ventilation holes of the equipment so that dust and others don’t penetrate through them. Just make sure that you take the cardbox out when you’re using the stereo! Those ventilation holes are there for a reason, and if you obstruct them, your system may malfunction out of the heating of the components.

Your CD unit should be cleaned periodically. Electronics stores sell a kind of special CDs with little brushes on them that are made specially for the task of cleaning the lens of the unit. Using those with a once-a-month frequency can greatly augment the lifespan of the CD player.

For the tape deck, regular cleansing of the head with isopropyl alcohol is recommended. Buy a box of cotton buds and use it to apply a small amount of alcohol on the playback and recording heads. If there’s oxide, apply the cotton tip until it is removed. Give it a few seconds to dry out. Also, in the same way clean the tape guides and capstan (if you don’t know what I’m talking about, refer to this diagram). The pinch roller should also be cleaned in the same manner, this time using a mixture of water with a pinch of washing-up liquid. Do not use alcohol for the pinch roller, as it is made of rubber.

Demagnetizing the tape decks is also recommended. With use, the tape heads and guides tend to accumulate a magnetic charge that not only can interfere with the appropiate playback of the cassette, but an also destroy its high frequency content (remember what we learned about the sour relationship between tapes and magnets?). There are cassette-shaped, battery-powered demagnetisers available in commerce. Those should be applied to your decks once a month.

On vinyl record players, the following tips should be followed:

This one is simple: keep your vinyl, CDs and tapes in their respective cases, and always store and stack them vertically, that way you avoid the deformation of the cases and the disc itself, in the case of vinyl. Obviously, the environment in which you store your records should have respectable temperature and humidity rates and be as clean as possible.