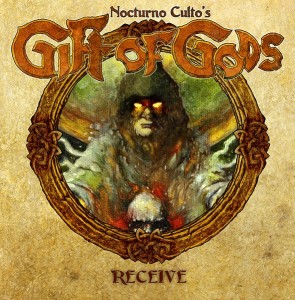 Long known as the adroit-fingered riffman for punk-black metal band Darkthrone, Nocturno Culto was once seen as a dark, mysterious and threatening figure but has adopted a more open public persona over the last decade.

As part of this, he is launching a re-vamped heavy metal style band named Gift of Gods which will be entirely his music separate from Darkthrone. The music sounds like Celtic Frost’s Cold Lake given a speed metal treatment and with the more complex riff transitions of earlier Celtic Frost.

To promote the new release, Receive, which will be released on October 28, Culto released a song “Enlightning Strikes” in edited form via the Peaceville mini-site for Gift of Gods.