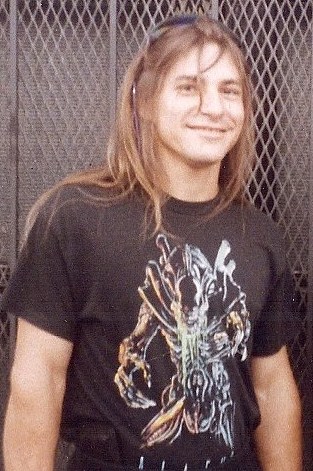 We previously posted an article about Mike Browning being disgruntled over some happenings with David Vincent and his wife. DeathMetal.org has offered to give Mr. Browning an outlet to shed some light on the happenings of the early days of Morbid Angel, as well as clear up any confusion that may be encircling the metal underground.

Not many people have such an extensive resume when it comes to being involved with innovative bands in Death Metal. Mike Browning helped mold Morbid Angel, then he helped to create Nocturnus. He has also played and recorded with Incubus, Acheron and After Death.

We are fortunate that Mr. Browning has given us his time to answer these questions.

Hi Mike. Thank you for your time. I have often thought of early Morbid Angel as Slayer on steroids. Why did you guys decide to take the music in such an extreme manner?

It was really what was just coming out of us naturally. Back then we weren’t trying to do or be anything other than an evil chaotic band that was real. We literally did Necronomicon rituals before we played invoking the Ancient Ones and then with that energy we would start playing. We even did it for rehearsals as well as live shows.

There have been confusing recounts of the Abominations of Desolation recording session. Was this Morbid Angel’s first official album? If so, why has the band referred to it as a demo?

I don’t know why the band says it’s only a demo. You would have to ask them that. They also claim that Sterling Scarborough played bass on the recording, which is not true either. It was John Ortega.

After Abominations of Desolation was recorded you returned to Florida and Trey stayed with David Vincent in North Carolina. Why did he stay there?

Yes the rest of the band went back to Tampa after we recorded while Trey stayed alone with David to do the mixing. It was told to us that it would be cheaper to just keep Trey there for the mixing, but when Trey came back he acted like a completely different person. He said we had to fire John Ortega and that David had found a new bass player for us which was Sterling Scarborough.

What was the actual reason for your departure from Morbid Angel? I heard that there was a physical fight with you and Trey.

Yes that is what happened. I stopped by his house one afternoon on my lunch hour from work and saw my girlfriends car there so I kicked the door in and found them on the couch kissing and I beat up Trey pretty bad. We were all pretty young back then so that is how I handled it by kicking his ass, but by doing that it caused the band to split up and that is when Richard and Trey moved to North Carolina and started playing with David, Wayne Hartsell and Sterling. I got Gino Marino and reformed Sterling’s old band Incubus.

Morbid Angel appear to be twirling into Skrillex influences more than Death Metal. Their last album Illud Divinum Insanus has been mocked by fans from all over the world. Why do you think they recorded such a weird album?

Well from what I heard that most of the music was written by Trey and he let David do all the lyrics. I’m not really sure if that is the truth, but it came from a pretty reliable source.

I don’t even want to have any thoughts about it!!! Seriously though I think it will only damage his reputation with Morbid Angel, but hey I am sure all he cares about is that he will make money and maybe turn it into a new career for himself.

Gen Vincent (David Vincent’s wife) has gotten you banned from the nightclub ‘The Castle’ in Ybor City. Why has she gone to such measures?

It’s because I made fun of David and their last album, but of course I didn’t start it all. There were so many people already making fun of it before it even came out that when I finally heard some of it I started making fun of it too. But I guess since I live in the same town and actually just a few blocks away from his house and that I was actually in the band that it was me that started all the jokes about him and the last album. So I guess Gen thought she would try to get back at me by having me banned from the local Gothic club because Gen is very personal friends with the owner of the club. I rarely go there anymore. Just once or twice a year when they have the bigger yearly events there, so it’s no big deal being banned. It was more about the point of it.

Thank you for clearing up some of the confusion that has been encircling the metal community. What are your plans for the near future?

Just staying busy doing both After Death and some live Nocturnus shows. There has been so much interest in people wanting to see the old Nocturnus stuff live that my band After Death has learned the whole The Key album and we are doing these shows and playing the entire album straight through. Then we’re throwing in some old Morbid Angel songs from Abominations of Desolation versions for the encores.

I also want to say THANKS to everyone who has supported all the music I have done over all these years and hopefully I will be able to continue the chaos for many more!