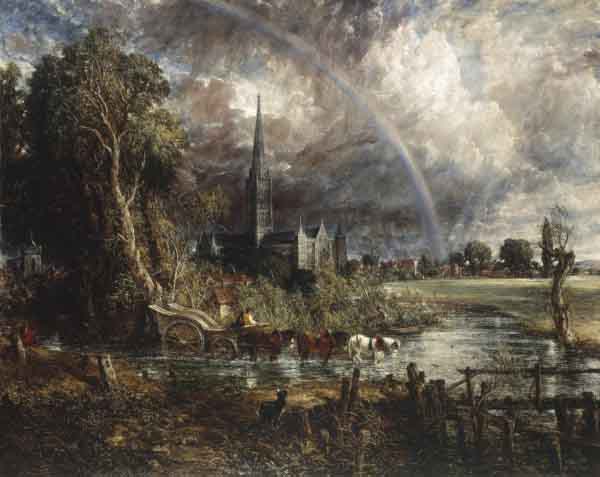 For over twenty years, this site and its predecessors have advanced the idea that heavy metal bears much in common thematically with the Romantic movement in literature, arts and music. Multiple parallels exist between what metal idealizes, and what the Romantics did.

Consider one of the better summaries of Romantic philosophy available:

Romanticism can be seen as a rejection of the precepts of order, calm, harmony, balance, idealization, and rationality that typified Classicism in general and late 18th-century Neoclassicism in particular. It was also to some extent a reaction against the Enlightenment and against 18th-century rationalism and physical materialism in general. Romanticism emphasized the individual, the subjective, the irrational, the imaginative, the personal, the spontaneous, the emotional, the visionary, and the transcendental.

Among the characteristic attitudes of Romanticism were the following: a deepened appreciation of the beauties of nature; a general exaltation of emotion over reason and of the senses over intellect; a turning in upon the self and a heightened examination of human personality and its moods and mental potentialities; a preoccupation with the genius, the hero, and the exceptional figure in general, and a focus on his passions and inner struggles; a new view of the artist as a supremely individual creator, whose creative spirit is more important than strict adherence to formal rules and traditional procedures; an emphasis upon imagination as a gateway to transcendent experience and spiritual truth; an obsessive interest in folk culture, national and ethnic cultural origins, and the medieval era; and a predilection for the exotic, the remote, the mysterious, the weird, the occult, the monstrous, the diseased, and even the satanic.

Let us put those attributes in simplified form:

At this point, the argument makes itself, because metal frequently exhibits all of these. Naturalism manifests itself along with introspection, or a reliance on the beast within over the reasoning that becomes external when codified. Anti-rationalism and anti-formalism become a similar crossover, with a distrust of justification, rules, laws, public morals and arbitrary versions of abstract theory. Elitism is apparent both in metal’s innate hierarchy, manifested in both its quest for the hardest and heaviest music possible, and the tiered layers of importance signaled through what band is on a metalhead’s t-shirt. Occultism has been with metal from its early days, both through the horror movie and religion-inspired metaphysical explorations of Black Sabbath and the creation of epic, Tolkien-style spiritual mythology from Slayer through black metal.

Finally, we come to nationalism, which proves a troubling subject because of the ghost of Adolf Hitler which seems to loom large over all modern endeavors. While the National Socialists were nationalists (nationalism + socialism = national socialism), they were not alone in this, nor was their interpretation universal. Most saw nationalism as a glorification of national culture and a reason to turn away foreigners and not genocide them, although the numerous black and death metal lyrics about mass killing and WWII confuse the issue. Clearly Slayer were not pro-Nazi as their pejorative lyrics to “Angel of Death” illustrate, and while much of black metal — Burzum, Darkthrone, Graveland, and Emperor among others — endorsed outright national socialism, most bands took a more traditional nationalist path through pride in their identity and by reflex action, the rejection of anything which would dilute it. As the multicultural states of the West roil themselves yet again with ethnic unrest, we have to wonder if the “middle path” of Immortal, Mayhem, Enslaved and Storm might not have been a better one.

Yet nationalism is only one part of the bigger picture, although an inseparable one. People who favor a surface reading of history tend to opine that nationalism only occurred with the Enlightenment, confusing the formation of nation-states with the existence of nations, which are in fact the opposite of nation-states. A nation-state defines itself politically; a nation, both ethnically and culturally. Where the Nazis believed they could define a nation via a state with an exclusive ethnic delineation — although they had no problem admitting those who were mixed, and consequently 150,000 soldiers of mixed-Jewish heritage fought for Hitler — the Romantic-era nationalists tended to be more like Elias Lönnrot in focusing on a positive method of unification by strengthening culture against the dual onslaught of the Enlightement and the Industrial Revolution. In black metal, the form of elitism known as misanthropy crosses over with this nationalism, which seems it could be summarized as preserving the best of an ethnic group and killing off the cultureless, valueless, soft-handed beta cuck city dwellers who litter the countryside when on vacation and do nothing of value in their cubicle jobs.

The important point about Romanticism as noted above is that it rejected the Enlightenment. That dogma held that the human being itself was the highest good; Romanticism held that specific human beings, denoted by their ability to have specific thought process and mental abilities, was the highest form. Where the Enlightenment mandated a mob, the Romanticists demanded a hierarchy of realists (introspection leads to “know thyself” and thus a better understanding of reality itself). This puts Romanticism in perpetual clash with the dominant paradigm of our time, even if it is also popular with silly people who want to pretend to be deep for a few years from high school until their second job. We might distinguish between actual Romanticism and theater department Romanticism, or even “#yolo Romanticism,” which comprises the latter category.

Where do we see Romanticism in metal? First and foremost, in topic: metal bands tend to visualize life as a conflict between a thoughtless herd and a few realists who bring the heavy reality. It also shows up in the lyrics frequently, although not as clearly as in Romantic poetry. But let us begin our exploration of Romanticism with one of those classics, albeit a very popular one:

The world is too much with us; late and soon,
Getting and spending, we lay waste our powers;
Little we see in Nature that is ours;
We have given our hearts away, a sordid boon!
This Sea that bares her bosom to the moon,
The winds that will be howling at all hours,
And are up-gathered now like sleeping flowers,
For this, for everything, we are out of tune;
It moves us not.–Great God! I’d rather be
A Pagan suckled in a creed outworn;
So might I, standing on this pleasant lea,
Have glimpses that would make me less forlorn;
Have sight of Proteus rising from the sea;
Or hear old Triton blow his wreathed horn.
– The World is Too Much With Us, William Wordsworth (1789)

From that we venture to a rather Romantic composition by Black Sabbath which seems out of place considering the stereotype of metal lyrics. Its poetic imagery is nearly pastoral, but still incorporates at least some of the rage of nature (“red sun” & cockerels cry”).

Then, for a mixed Enlightenment/Romanticism approach, there is this rather defiant piece by Metallica which takes teenage resentment of incompetent adulthood and a one-size-fits-all egalitarian and utilitarian society and channels that anger into a statement of defiance based in the individual, but reasoning from objective problems with society at large:

Rape my mind and destroy my feelings
Don’t tell my what to do
I don’t care now, ’cause I’m on my side
And I can see through you
Feed my brain with your so called standards
Who says that I ain’t right
Break away from your common fashion
See through your blurry sight

Out of my own, out to be free
One with my mind, they just can’t see
No need to hear things that they say
Life is for my own to live my own way
– Metallica, “Escape,” Ride the Lightning (1984)

Slayer took this general approach and converted it into a mythology that was as much Christian — avoidance of Satan, and fascination with the mythos of The Fall — as it was occult, incorporating elements of both alongside some defiant egotism. In this piece, the individual declares himself the opposition of all that is approved of (symbolized by “God” and “lie”) and takes on a mystical, spectral and vengeful presence:

I am the Antichrist
It’s what I was meant to be
Your God left me behind
And set my soul to be free
– Slayer, “The Antichrist,” Show No Mercy (1983)

Perhaps the most evocative lyric to my mind, and recalling scenes from another southern writer, William Faulkner, the Texas thrash band Dirty Rotten Imbeciles (DRI) wrote this paean to resistance to modern society on the basis of its ugliness and numbness. Again, the utilitarian — a culmination of Enlightenment thought — shows itself to be the enemy of the individual, but the individual points to larger things of importance (nature, beauty) as the reason for his enmity:

They block out the landscape with giant signs
Covered with pretty girls and catchy lines
Put up fences and cement the ground
To dull my senses, keep the flowers down
– Dirty Rotten Imbeciles (D.R.I.), “Give My Taxes,” Dealing With It (1985)

Finally, we come to a more stylized statement of the Slayer/DRI approach, in which the individual has like Friedrich Nietzsche rejected the definition of “good” used by the dying civilization. Instead, he is the enemy of humankind for having “(mis)understood” “this romantic place.” The usage of “romantic” here clearly refers to Romantic, and not lowercase-r romantic as in the rather icky novels with Thomas Kinkade covers. Much like Zarathustra, this individual rejects love (“hateful”) and civilization itself (“savages”) with a form of evil that originates in nature versus human delusion. Its call to destroy the excess of society and replace it with woods evokes the elitism and misanthropy of black metal, in that it sees most humans as “talking monkeys with car keys” (Kam Lee, Massacre).

Hateful savages, strong black minds
Out of the forest, kill the human kind
Burn the settlements and grow the woods
Until this romantic place is understood!
– Absurd, “Green Heart,” Raubritter/Grimmige Volksmusik (2007)

Perhaps this subject will receive future study instead of the rather politically-inclined pieces about race and gender in metal, neither of which seem to matter to metalheads except at the level of the political. Men and women of all races and creeds happily mix at metal shows, completely disagreeing with each other but, because they see civilization as failed, realizing they are not defending a social order but maintaining their own separate ones. This Romantic view sees the modern state as a parasite and modern society as a corrupt bourgeois entity dedicated to its own pleasure and wealth at the expense of shared good things like woods and truth. With that outlook, almost every metalhead can agree at least.