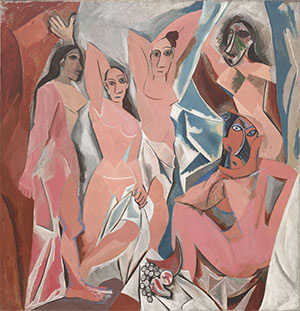 The other day I looked up Picasso’s Les Demoiselles d’Avignon. I had seen it before a couple of times and heard it was important. It’s basically some chicks from a brothel with bodies deformed by Pablo’s furious brushstrokes, eyes staring at you uncomfortably and somewhat comically. A painting central to the evolution of Cubism, apparently. The point is that this is where visual art collapsed. The year was 1907; the nightmarish figures of modern art had already been around for decades, but now all traditional assumptions had to be annihilated, paving the way for all modern things to come – for all things post-modern as well. In hindsight, it’s simply the putrefaction of dying tradition doing its job. And we understand you, Pablo; you, the genius, had to show us what this meant, you had to show us the horrors of having no perspective at all. (How do we even start looking at a woman with two and a half arms?) Comedy aside, make no mistake: Les Demoiselles d’Avignon is sheer terror. As such, it suffices, it does what it should – it works. Those disconnected shapes told of all modern art to come, avoiding conformity to the most extreme degree.

But as with all such experiments, it fails to tell a story. It’s easy to point fingers at modern art because of its apparent ugliness, but its real weakness is that it’s a simple cry in the dark. Yes, the modern world leaves quite a few existential challenges for man to take on, but making your art as pointless as you perceive the world will make us all end up in a downward spiral. If you have something to tell the rest of us, then wrap it up properly and share the experience. You can’t do that with a “perspectiveless” experiment. But that is, unfortunately, how modern and much of contemporary art has interpreted the world.

(Now, I’m no expert when it comes to modern art and I have no problem saying that all modern art is not crap. But when you’ve come to understand its overall idea, you don’t have to be an expert to dismiss it. As with jazz, the very idea behind modern art is “faulty”, which is why the probability of finding beauty among the rubbish is very modest.)

Heavy metal music chose a different path. Black Sabbath knew the world was not all beer and skittles when they recorded their first album, but they weren’t crybabies either. They didn’t, like Picasso, make an experiment based on how we have nothing to base things on. Instead, they told a mysterious and intriguing tale of what the world had become. Following in their footsteps, bands like Slayer, Deicide and Emperor put all this ugliness in musical narratives which in themselves were paradoxically beautiful. Not as direct mirrors of our world and society, but as stories with a glimmer of excitement.

This is how metal music rediscovered tradition, a tradition of storytellers who have supported our souls through the ages, from Homer to Bach to Rembrandt to old men by a fire in a small hut in a murky forest. Metal was chaotic, especially at a glance, but underneath it all was a spirit that believed in life. This way metal music created a resonant mythos for people in the postmodern era. 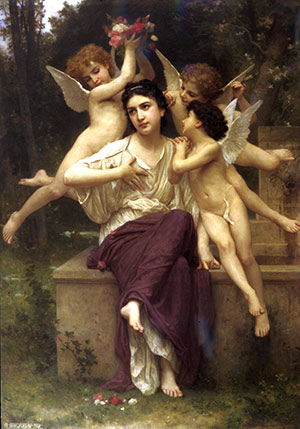 But finding tradition seems a happy coincidence in this case, or, more likely, something which metal music realized only through sheer necessity. Deliberately reinventing tradition in art isn’t always a good idea. It has been tried before, and in my experience the results are actually worse than a cry in the dark. If we go back to the visual modern arts and look across the spectrum from Picasso’s wild experiments to the opposite side, we find (among others) the Academics, like William-Adolphe Bouguereau. This is from the wow-I-can-definitely-see-what-it-depicts-but-it’s-boring-me-to-tears school of art. It has no urgency. Great art is almost by necessity always inspired by personal experience in the world and time we live in. Trying to remove yourself from it will turn the art into stories about virtually nothing. And that’s what we see in Bouguereau. An artist trained in the old school, with all the craft of tradition but none of the spirit gained from experience. That experience doesn’t need to be one of terror, but giving an artwork weight demands an ability to pick up what is going on around you and inside you. And we are not talking socio-political particularities here, but an existential understanding. What does it mean to be human during this time and this place?

One may find it hard to believe that the musicians of the most extreme bands in existence ever thought about this, and perhaps many of them never did. But somehow their instincts have sniffed in the air the feelings of the time, remolded it in their heads and had their guitars resound of what it tells – even if they motivate it by, “Listen to this sound, man, it’s awesome!” The artist is told something about the world, and tells it back to us. Bouguereau in comparison sure makes fancy wallpaper, but it’s anything but awesome – it’s lifeless.

Metal music, then, builds anew in accordance with a tradition that the Academics only very superficially mimicked. It also sees much of the same things Picasso saw, but while he screamed with pathetic terror, metal screams with delight. 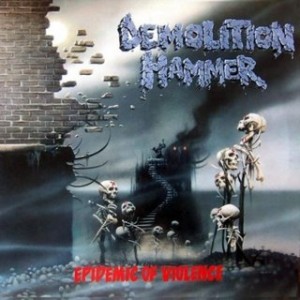 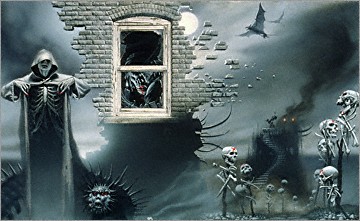