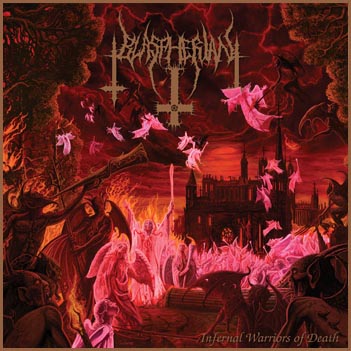 Blaspherian improve upon their promising debute Allegiance to the Will of Damnation, sharpening their focus by developing riffs as themes, stacking multiple variations of a similar idea and then slaughtering it with counter-themes. In the best tradition of death metal, these songs make sense once you’ve heard all the riffs in sequence, but you would not think they’d fit together if you heard them separately. This gestalt allows Blaspherian to create a deepening atmosphere of cavernous doom, using the time-worn technique of old school death metal bands but wrapping it around a new spirit, one in which evil is deliberate and contemplative instead of chaotic. Through this evolution we see Blaspherian staying true to the old school, but allowing gentle influence from the developments of black metal and more recent maturations of the style such as those seen on later Immolation and Beherit albums. The emotional side of death metal emerges but is confined within a cold and inhuman logic, making this music both as natural as an open summer sky and brilliantly outside of the human norm under which we suffer. Blaspherian use a low-tech approach, with percussion that sounds like early Incantation and anchors the riff-fest generated by former Imprecation guitarist Wes Weaver. Detuned, bassy riffs of one to four chords hammer out patterns that then mutate and contort, often with a dropped note or changed picking technique, to produce textural layers through which melody filters. While firmly grounded in the old school, Infernal Warriors of Death opens up new horizons for the old school death metal genre, which now exists in parallel with others. It also shows what made this genre powerful in the early 1990s and makes it doubly relevant now, in the process delivering powerful music with an intense and resonant atmosphere.