Among the superb examples of classic literature produced by the once rich and productive european culture; amidst the works of a fecund civilization that have left a permanent mark on the subsequent generations, proving their relevance in all eras of human history; touching topics that are so eternal and defining of our humanity, such as the neverending strife for life on all levels; among all those works, very few pieces of writing (and art) can reach the heights of Virgil’s masterwork, the culmination of a lifetime of work and self-improving in the field of the written word. 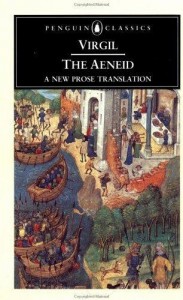 The intention with this review, less than providing a synthesis of the book’s argument, which can be found anywhere else on the Internet, is to give the reader what we believe is the central message of such a story in a short and concise manner so you can pick the book and explore the depths of its message for yourself.

The main subject of the story is the overcoming of difficulties and the strife for better conditions of living, or a better future. In the example of a group of survivors from the destruction of the legendary Troy, them lead by the fearless and noble warrior Aeneas, as they go through a series of awful calamities one after the other, with nothing but the promise of a bright future that the mentioned group of people won’t even see for themselves, but which will be enjoyed by their descendants, the future patricians that would build the greatest civilization known to man, Virgil gives us the best example of the glory and the rewards of reaching new heights by conquering difficulties.

It is this argument that best reflects that condition of human life that modern people try so hard to hide or run away from: the unescapable fact that, if we want the good things in life, we need to make some effort to get them. Not just some meager effort, but a serious one, since calamities, the only sure things in life, and the ones that come most easily, will get in the way of our dreams. Such calamities may come in many forms: the death of a close one, the sabotage made on us by envious people, the crash of the financial market, or a meteor falling through your roof and into your room – it doesn’t matter. They are as real as the air you breath (“only death is real”, indeed) and you will need to face and go through many of them if you want to get some of the sweet fruits that the tree of life offers.

Despite the universality of its message, I feel this book applies specially to hessians and the hard path in life they choose to take. As modern warriors, wandering as misunderstood entities in the maelstrom of modern life, the analogy with the wandering trojans is self-evident. So, even thought this story doesn’t depict long haired dudes with beer guts, it fits the metalhead persona like a glove.

Grab this and learn the joy of surviving the brutal game of life, the hessian way.