The tantalizingly-named Blasphemy Day International is basically a thinly-veiled excuse to troll Muslims who were offended by cartoon caricatures of the Prophet Mohammed (PBUH); if you ask me, it’s kind of a shitty passive-aggressive way of going about this.

However, it’s also a good excuse for blasphemy, and we need more of that.

The holiday is on September 30. This year, why not:

I. Increase the Traditional Blasphemy

Our tribute to this is the Internet Altar of Unholy Blasphemy and The Christian Holocaust.

II. Force People to Accept the Genius of Paul Ledney

III. Extend this humanism, the secular form of populist religion

If we can blaspheme Islam and Christianity for being ignorant, how about humanism?

Humanism is the idea that humans are more important than reality, and that they’re all equal, and that their feelings matter.

The fact is that most humans are shitheads, and we want to celebrate the few good ones.

People hate it when you rape sacred cows, then cut their heads off and make them into burgers. Do it. With extra ketchup. 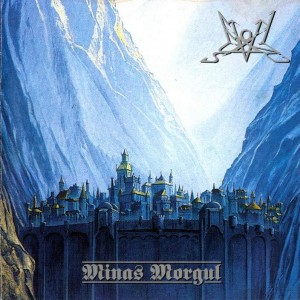 Great Death Metal, through its boundless courage, developed an uncanny ability to plunge listeners into a subterranean labyrinth, revealing the philosophical impetus that stimulated the development of the genre itself. Black metal is slightly inverted, wherein the meandering melodic and thematic developments reveal an adventurous spirit and a desire to plunge into and discover the majesty of the infinite. Indeed, although each genre is somewhat complimentary there is a stark philosophical difference that characterizes each, where Death Metal revels amongst the catacombs and forces listeners to re-evaluate life in the face of their impending doom, Black Metal having stared long enough into the abyss and having emerged from the catacombs seeks glory amongst the stars, and in so doing provides listeners with a glimpse into what once was, and must be again.

Minas Morgul is a testament to this very spirit. Individually meandering, soaring and delicate melodic phrases weave around one another, periodically converging and thus creating a breathtakingly lucid and organically familiar polyphonic structure. What the listener will find most striking is the way each melodic motif develops according to its own internal logic while simultaneously complimenting and augmenting the presentation and development of concurrent melodic lines, which themselves develop according to their own internal logic. Here the infinite abounds as listeners bear witness to the expert use of polyphony, with each rung in the ethereal melodic hierarchy subtly altering the emotional experience of the listener through its capacity for slight differentiation.

The individual melodic motifs themselves are more robust and less restrained than the cryptic sense of melody that characterized say early Darkthrone. However therein lay this albums strength, as each melody is highly communicative and capitalizes on its inherently archaic, although timeless content to appeal those psychological archetypes that define the modern Hessian, to wit, regality, a desire for adventure, wanderlust and a sense for the transcendent.

Guitars are a secondary instrument on this album, however they are utilized with such tact and melodic viciousness, if I may say so, as to ensure that the sometimes airy and sentimental melodies remain grounded, bonded to an orthodox sense of attack and ferality that has always made great metal threatening, challenging, confrontational, and insightful.

Indeed, what makes this album truly compelling is that it successfully melds together a romantic longing for those eternal values that once gave life meaning, with a feral and commanding spirit that wishes to take hold of life and explore it’s depths, and its mountainous heights! One is less likely to find an album more suitable to one’s journey of self exploration and self transcendence.

You may have wondered what Kam Lee was up to between Massacre and Kauldron, Bone Gnawer, The Skeletal and his other current musical projects (and one horror film appearance, in Deep Seeded).

The answer is that back in 1998, he released a demo by his one-man black metal project, PHLEGETHON RISING:

He claims a BATHORY influence in addition to the HELLHAMMER-ish parts, but in many ways, it’s reminiscent of early DEMONCY and PROFANATICA. Good to see this reach the light of day.

The Grotesquery – Nightmares Made Flesh

I’ll never understand why places like Amazon, where kids can hitch a few items onto their parents’ orders and get away with it, don’t put greater emphasis on works like the following:

In fact, they seem to almost want to hide it, as if they’re afraid of the controversy that might come from encouraging citizens to blasphemy. That’s ridiculous, given that our current regime would love nothing more.

Maybe it would be fun to coerce these opposing forces into revealing themselves. Are you pro-blasphemy, or anti-blasphemy?

Paul Ledney, the primary composer on this CD, spent some years in INCANTATION and REVENANT trying to make the ideal of music to him: stripping of all meaning, pure nihilism and primal id expressed through sonic violence.

On this CD, he came close. In the vein of early BLASPHEMY or BEHERIT, this is primitive chromatic riffing with unusual, almost hasty song structures, using his odd method of picking three-note “modal stripes” and repeating them at different positions in the chromatic scale.

Surrounding this are the cavernous vocals of Ledney himself, which like a whisper made into a roar surge around the music, carrying it like a rhythm instrument of deviant intent.

Sounding very much like the results of a weekend of apostate demons camping in the countryside and, in the midst of their blasphemy, picking up guitars to make unholy music, “Dethrone the Son of God” exemplifies the feral and nihilistic spirit of black metal.

I’m not telling anyone what to do, but if a horde of people showed up and started discussing this in the amazon forums, commenting on it and otherwise encouraging it to become more popular, the results might be telling. -|-

During the 1980s and early 1990s, Houston was lucky enough to have its own metal magazine.

With the slogan “Free – Take One!” emblazoned across the top, Rivethead Magazine was a familiar sight in Houston-area record stores, especially those that were — how shall we say — metal-friendly.

Interview with Lisa of Rivethead Magazine

In the late 1980s and early 1990s, this was a regular metal magazine that you could get for free at record stores in Houston.

Every concert and new record release was in it. Not only that, but it covered ANUSian topics — much like the Metal AE — such as the history of metal, music theory, what defined metal, genrology, the spirit of metal and the clash between metal and the counter-culture as well as the pop-culture above it.

The website has a comprehensive archive of their late 1980s and early 1990s issues, which focus on a mixture of heavy metal, speed metal and the birthing of death metal. The approach is professional even if the methods are homebrew:

Also see our article on Examiner.com.

The arch-wizards over at DEATHMETAL.ORG summon forth an article covering the breadth of Finnish underground metal, and cap it off with a hour of music in a compilation of Finnish bands both well-known, and totally unknown.

I notice the comments for this video lack any references to sodomy or violence against Baby Boomers. WTF?

From a notoriously fractious and insightful source, a rant that nails it — on Facebook, of all places:

It’s from “formula” in metal music that has either been the downfall or the up rise in the genre and among many of the bands. When bands set a distinct genre – and a set “formula” is established, once those bands begin the mix or change that formula, is when they take a risk of failing.

Sure some newer fans may take to the new formula – but those already established fans in the formula have a certain “taste” for what they prefer. Change the ‘taste’ – take the risk of having the already established fan base spitting it out after the first bite. Sure, some will attempt to stick around and nibble at the edges… attempting to find a similair taste and familiar feeling…

They will even attempt to make excuses, attempt to rationalize it, and even go as far as to use controversial behaviors or feelings in an attempt to explain in a rational or logical manner their intrepid points. They wish to avoid any true explanation of the utter disgust and disappointment they are truly feeling, and thus hide behind pitiful excuses and whitewashed ideals and values.

However, in my opinion – when a band decides to forsake the formula that works, and forsakes integrity in exchange to gain “a piece of bread” (make $money) – I personally do not feel my loyalty is any longer of importance to the band. They have already decided that my personal opinion is no longer valid, and that other fans too that may share the same or similair opinions are also no longer important as well.

Integrity and pride more so than often get’s washed away in favor of the notoriety and tempting promise of “fame and glory”.

As well… with “formula” when a new genre is attempted to be made – by changing an already established genre, and trying to “mix” in something new to that genre. It is NOT likely to be accepted by those fans who already – as I said above – have an established taste for what the genre already has been dishing out.

And as I said above –
some newer fans may take to the new formula – they will even attempt to make excuses, attempt to rationalize it…

even go as far as to pretend to accept is as inevitable change.

Formula means repeating what others did.

However, that “what others did” is an effect, not a cause.

The cause of what they did was the need to translate an idea/mood into music.

The effect was how they did it.

You can’t get the same effect by imitating their effect; instead, you must rediscover their cause.

But if your motive is fame/notoriety/kvltstatus/$$$ instead of “making art” (to translate that idea/mood into music), you will not understand that cause.

As a result, it takes integrity/authenticity seriously — it is music of the Idea, and by that I do not mean dogma or the reality-detached idea, but an enmeshment with reality.

Like Romantic literature, it is born of a time in crisis… it is mixed-blood, with some blood being the feel-good prole average (rock) and some being the rising above (ambitious music->art).

What does it mean?

When metal loses its honest intent to create art, and to translate an idea/mood into music, it becomes window-dressing: pandering to the crowd for popularity points.

And then, it becomes the same callow manipulation we’re running away from, and that running away got us into metal.