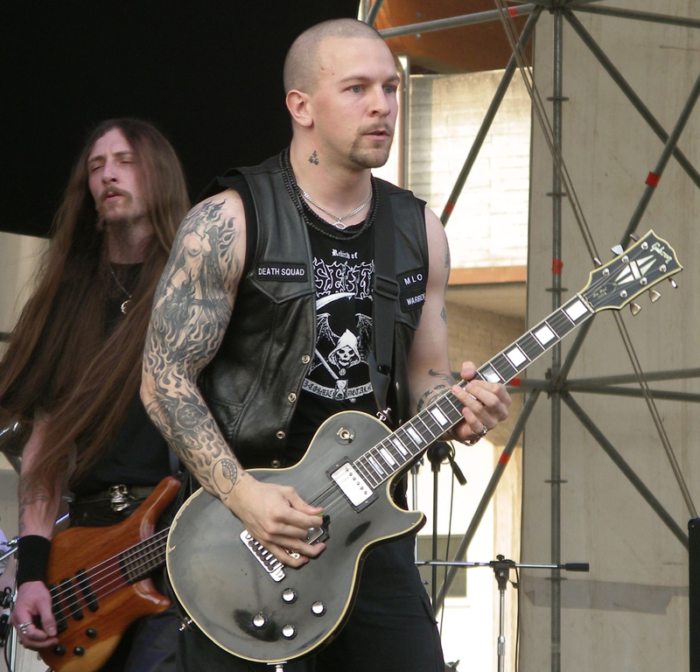 A long drum fills announces the coming of an initial motif that is in the vein of the Swedish death metal style ending on a dissonant minor second interval. The bass marks well its presence like Steve Harris would have done and explicitly plays the implied harmony in thirds to complete the sound rather than mirroring the root note. The bass maintains the motif as the guitar briefly plays low string open power chords as an another minor scale motif glides graciously over the power chords until the main motif briefly returns. The main motif is a very long riff that holds the DNA for the following riffs and ending the melody on dissonance allows a less tonal and typically death metal riff to build even more tension whereas the previous Swedish bands would either oppose consonance and dissonance by twisting the initial riff until it muted to something else. Dissection on the other hand follow the black metal route of making sure that all connections are as fluid as possible and each motif builds directly from the ending of the previous one in a linked chain structure. The adventurous and epic opening is about to reveal something much darker.

The ending of the initial motif is twisted into a dissonant affair as an almost atonal run save for a minor sixth completes the riff and adventure has been replaced with the fear and mistrust of something unknown. Blast beats and Nodveidt’s Dead like growl appears but with more grit and anger rather than the empty nihilism of the Mayhem frontman. The riff has mutated even further to a classic Morbid Angel riff that combines chromatic notes with the primary melody to maintain coherence.

The adventure of the initial motif is the feeling of defeating an enemy and still wanting to continue to combat other foes as the struggle did not suffice. The first dissonant melody returns as it shifts to the first melody as one guitar glides once again with a slower harmonic minor melody that absorbs some of the chromatic notes to as the themes of war, adventure and lurking darkness coexist in a limited space. Where most listeners would think that the initial melody continues without any variation, repeated listens reveal that there is a subtle shift into harmonic minor territory with the introduction of the augmented 7th that adds to the oriental and mystical quality of the scale as it is an interval not associated with minor scales in most western music.

Tempted by the night to spread hate and fear
Were the revenge the blackest, Their souls is our prey

The lurking darkness is not that of some beast nor deity but the urge within each man to seek punishment and to hurt those who have hurt us while inflicting even more damage to them. This time these warriors seeking to eradicate them by preying upon their souls. A change in pace as the drums slow down and a typical Judas Priest riff erupts as adventure and excitement leave for blind revenge. Through typical heavy metal note selection that replaces the adventure by the sadness that early Judas Priest showed in some of their compositions that hatred is allowed to emerge in full force as there is no joy in revenge.

Storms of evil, thunder and might
Their moons in our eyes, a guiding sight

The narrator describes the power of revenge and how it evokes the power of nature in each man. To see the moon in someone’s eyes is to see love. There is only a thin line between love and hate and in the case of revenge those lines are blurred as the obsession for revenge is the love of hurting those who have hurt us. A solo erupts over the riff briefly harmonized and getting straight to the point in showing desire and urgency towards the task before a demonic laugh showcasing another thin line between happiness and anger.

A long pause before a return to that Morbid Angel-esque riff that quickly transitions to a new riff that follows the typical minor chord progression that Iron Maiden have extensively used throughout their career. While the transition is somewhat forced, it works as all the basic ideas have been previously introduced and there is continuity in the thematic approach which binds the song together whereas on a purely musical level it would sound strained and forced. Intelligent and subtle fills supplement the riff as the growls of a military commander recalls the long journey to destroy their enemies.

We in the march of profanity
The darkest breed, again we’ll rise
Forth against the flocks of the weak
We’ll approach a land forlorn

The lyrics show that these soldiers have been completely consumed by darkness in hopes of returning to former glory as their enemies are described as being cattle living in a desolate country that will soon be eradicated. Nietzsche’s will to power comes to mind as those who have been defeated have found the power necessary to overcome tasks that were once not possible. The main motif in its first iteration returns with the exact same graceful lead as the screech shows more and more urgency by a slight increase in pitch.

White is typically associated with good but here our protagonist denounces such fragile notions of good and evil and states that power is supreme as those who have power will exterminate the weak and therefore the might is right and the good/evil dichotomy is false.

A chromatic break of two chords leads leads us straight into a flurry of tremolo picked power chords as a new motif springs forth completely subverting the main motif while staying within the confines of the harmonic minor scale with a minor second added in for added dissonance. While the note selection is similar to the main motif, a reliance on wider intervals and strategically placed chromatic notes give an almost atonal effect due to the sudden shift in intervals.

(The Land) where eyes are blind we have found
Battle sign under the shape of mine
Darkest souls now set free
We rose again, damnation’s reign

The lyrics reflect the chaos of the music as they have arrived to the forlorn land and have began to create chaos by destroying their enemies as all their hate is unleashed upon their enemies as they satisfy their blood frenzy. A new harmonic minor riff that slightly mimics the structure of the main motif yet with emphasis on the minor sixth interval that tends to be very uprising when used correctly signifies a joy in the battle, but one of a most primal nature that is insatiable as the melody finishes in the most ambiguous of ways as Nodveidt continues to growls like a madman.

The people being attacked have seen their ideology and beliefs annihilated as the warriors eliminate their notions of what defines greatness as our narrator brags about rolling around like a pig in their tears and sorrow. These warriors have found meaning in life through the persecution of their foes and their overwhelming victory that has righted previous wrongs. A purely chromatic ascension leads us to our conclusion and climax as this tale of revenge and hatred comes to an end and as the listener waits for more conventional melody after having to bear all that tension.

After the interlude we find ourselves returning to the Maidenesque riff yet this is not a chorus as the sense of excitement has been replaced with pride and restored honor as the task has been completed and the darkness temporarily subsides. Yet instead of turning home these men continue marching on as they have realized that the natural order is Darwinian and only the strong survive as they continue to defeat weaker enemies and travel to even more distant countries that are about to become void of human life. The lyrics allude to a more realistic vision of life than most would see as Dissection know that either you are the predator or you are the prey.

We’re the march of profanity
Your tragedy, flames will rise
Forth against the flocks of the weak
No return, A land forlorn

The second iteration of the main motif returns in full force as our narrator leaves for more battles. A new variation of two minor scale rune differ by a semitone lead us into the final part of this riveting composition. A slower power chord based iteration of the main motif greets us as the composition shows the devastation and the joy that has just occurred. By taking the main notes and omitting the rest the primary melody has been deconstructed down to its pure essence in the same way later Bathory would use to create grand images of battlefields. A chromatic riff completes the melody as darkness begins to return mixed with the feeling of grand adventure. The initial lead returns and shows that war is never ending and should be embraced as the song cuts out.

Though Dissection’s later works show a lack of coherence through grandiose ambition but without the necessary vision, here we see a band that refuses to ignore any of their influences and that has merged Death metal, Black metal and Heavy metal into one cohesive whole by establishing solid motifs that can then be manipulated as is necessary. The narrative black metal arrangement has also allowed much more fluidity by making sure that the ending of one riff leads to another whilst the death metal idea of making each riff communicate to the following riff has allowed for greater diversity. Avid students of metal, Dissection lived out their lyrics to the fullest and showed the newer possibilities that existed in extreme metal by embracing the past and combining various elements in unlikely ways and have thus have cemented their place in the pantheon of great metal acts.

4 thoughts on “Analysis of Dissection’s “A Land Forlorn””