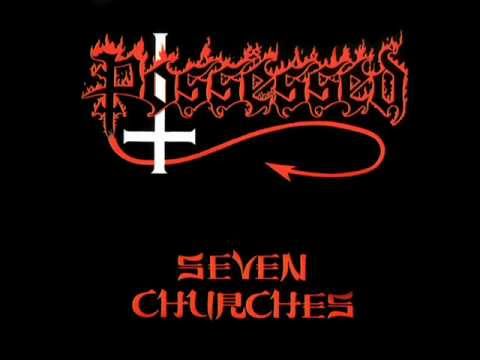 A: This riff is in the phrygian mode which is known for its exoticism and oriental quality and this creates the supernatural intrigue of this song while allowing the band to use a dissonant minor second to create tension.

B: The tonal center is shifted up a minor third, a fourth then a minor second before the tritone resolves on a fifth. The shift creates a demented effect while the melody moves towards instability and then resolves on a simple power chord shape that consonance and clarity to the chaos.

C: This melody adds tension with its smooth tremolo picking ending on two strummed power chords and on the second tail with a single note. It descends smoothly on an intriguing minor seventh that then explodes on to a major third which adds intrigue as a “happy” sounding interval sounds completely disjointed and the second variation ends on a minor third which pushes the chaos into sanity while maintaining the viciousness of this melody.

D: Here there is an octave jump on both guitars in order to completely grab attention in an otherworldly movement. A progression consisting of a minor third, a second, minor third before a tritone jump against the minor third that resolves on a fourth. The second part shifts to a minor second center and then plays the major third and minor third as all this composition’s ideas lead to this point. The venom of this piece is toned down as a spiritual evil manifests into physical form blurring the line between the two. This kind of idea would become a staple of bands like Dismember and then form the basis for a lot of the second wave of Black metal.

E: In many ways a continuation of D which is characterized by tremolo picking punctuated by powers chords. The progression is the root note punctuated by a fourth, minor second second punctuated by a fifth, tritone punctuated by a second. The melody starts in a very stable and neutral environment before going from dissonant to consonant before ending on a somber tone. An ambiguous beginning introduces the charge that briefly finds stability as if the forces of evil were waning but then tricks expectations by ending on a lamenting note.

D is the crux of this piece and represents the summit of each these cycles barring the last one.

A introduces the relationship between B and C which is the anchor of the piece and in a Speed metal context would represent the long verse that would lead to the chorus but here the band opt to distort that idea and decide to lead towards D which serves as a recurring melody rather than a full chorus.

E being a longer melody that recapitulates many of the ideas from D and pushes them towards creating tension before exploding back to D again and ending the cycle.

All the ideas have now been introduced and exploited in pairs consisting of B-C and D-E. The band change the relationships and decide to pair E-C and C-D. This creates progress in the narrative as the riffs are all built from the same ideas and the piece shows traits of more mature Death metal as it effectively weaves this harrowing tale while building tension towards D through the E –> C –> B –> C passage that makes the final D –> E –> D section feel like a true climax.

After the final high this piece returns to the now familiar C that is now played without B as it provides closure before reintroducing A as an outro in the circular manner that was still prevalent with underground acts of the time and slows down the song to signal a dark twisted finality on the final chromatic pattern.