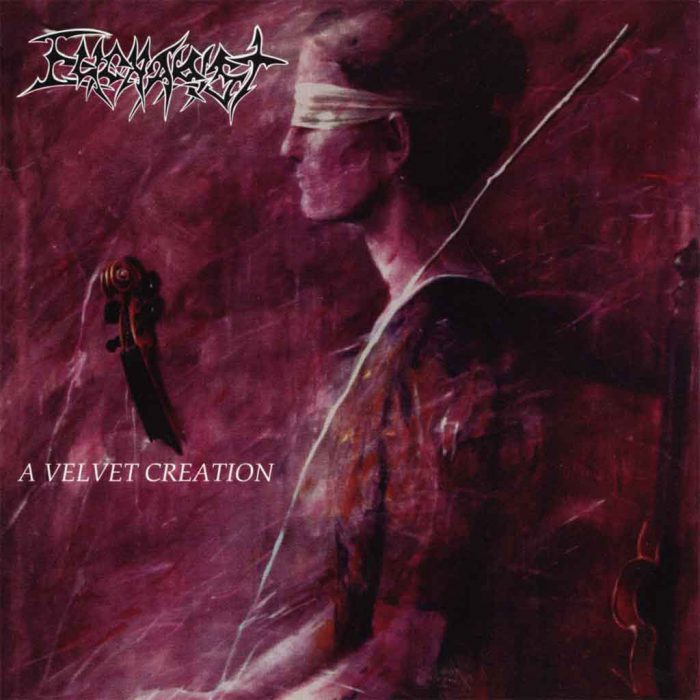 The entire melody is contained within the harmonic minor scale which is known for its darker Arabic sound. Here one guitar starts with a long melody that goes across the entirety of the scale while the other holds a few important notes to accentuate them. What differentiates this from many shredders and technically oriented bands is how the lead guitarist doesn’t adhere to any predefined pattern and seeks to create a verbose melody that doesn’t lose any of the dramatic catharsis that is typical of the band. “Technical” guitarists will play similar long patterns at higher speeds where each note becomes negligible and only the overall shape will convey a simple idea but this is of minor importance as the rhythm guitar will just play a simple riff to provide background noise while the lead guitar cycles through predefined reusable shapes. Eucharist avoid this through clever note selection. The riff descends across the scale and combines chromaticism with large interval leaps that don’t resolve the melody creating a sense of mystery. Each note is played twice in what could be seen as eight groupings of two notes. This keeps a fast pace to the melody while still allowing each note to remain completely intelligible as without the groupings the notes would fly far too quickly for their weight to be felt. The second guitar during the descent holds on to the root note two octaves higher before lowering down to the same note but an octave lower. This is played in two groups of sixteen notes with the goal of providing a fixed tonality for the somewhat chaotic descent. This gives direction to the descent.

The ascent played by the lead guitar is simultaneously within the harmonic minor scale and atonal. The ascent follows the diminished seventh arpeggio which is a series of minor thirds and since there is no variation in the intervals it becomes atonal as no root note can be discerned and therefore there is no tonality. The band counter this with the rhythm guitar playing the augmented seventh which holds the ascent firmly within the harmonic minor. Instead of releasing the tension the band delve deeper into more exotic territories which continues the momentum set up by the first two bars. The third bar takes the first bar but removes the opening fourth notes and ends with the fifth to end on a stable note that leads to the following passage. The fourth bar opts for finality as the lead guitar slightly changes the melody to avoid the previous descent. The rhythm guitar starts with the second bar of the descent and instead of ending on the root note, the melody goes through the augmented seventh and ends on the second in the same way the ascent started. This marks a climax to the short passage as all the ideas have been introduced then pushed to their logical limit before exploding in the final bar in this complex yet powerful instance.

This is one of the most fascinating introductions within death metal as so much effort is put into such a short sequence that plays with conventional harmony in a completely unexpected yet mesmerizing way. This takes from At the Gates and shows how rich the seeds they sowed were. On those four bars, Eucharist did more than what most bands could ever dream of doing.