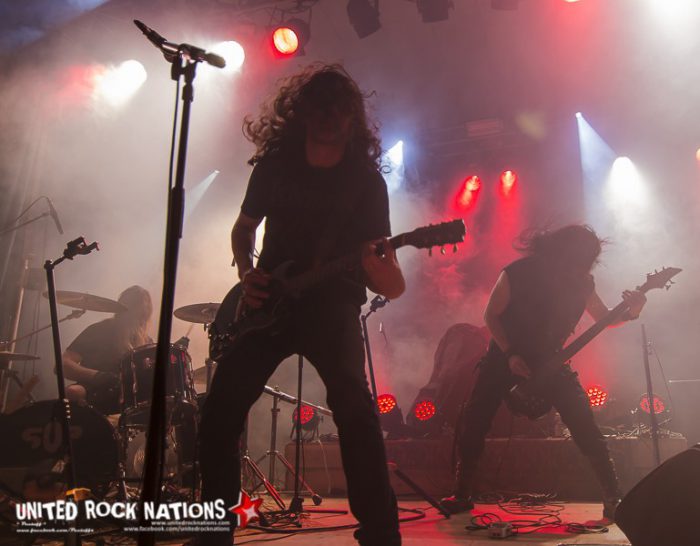 The tonal vocals are not sung with good technique or with much conviction but rather a heavily accented, emotionless voice that hits the right notes without any problems. One of the many reasons why English language music sung by French speakers sounds flat is due to the lack of tonic accents in the French language. A tonic accent is defined as being a syllable pronounced with great stress. Without these, words sound flat and almost unrecognizable to the experienced/native English speaker. The vocals have a tendency of cutting up the syllables at random places due to the lack of fluency from the vocalist. All this removes the individuality and humanity from the vocals which is necessary in regards to maintaining consistency with the themes of the album and avoiding the personal drama that has infested the way that clean vocals are handled in extreme metal.

The guitar, like all string instruments possesses a certain number of unique sounds that require a wide variety techniques to activate. This is accomplished by manipulating the nodes on the strings (points of the string where there is minimal variation in amplitude when the string vibrates). Incantation for example use this extensively to create sounds that make their melodies more twisted. Out of all the possible tricks available to distorted guitar, Supuration use the simplest one, the natural harmonic. The guitarist lightly places places his finger over the node while picking the string normally. This simple technique is often ignored in metal as it creates bright tones that are limited as they occur in very few places across the guitar neck. “Through the Transparent partitions” shows this perfectly as it creates an otherworldly melody from these bright tones. Of note is the way the opening chords of “The Cube” are attacked. Rather than hitting the string with the pick. Both guitarists pinch them with their fingers which allows them to interrupt the decay of the chord and thus create the unique sonic effect. Bands like Hellhammer found success in playing with ideas that were discarded by other bands for being too simple and Supuration continue within that path.

In metal there has always been a golden rule in regards to the roles of both guitars. When diverging, the rhythm guitar sticks to the lower end of the neck while the lead guitar explores the higher regions. The Cube does adhere to this mentality for the most part but at times both guitar will play variation of the same melody on the same octave. This is mainly avoided as both melodies will occupy the same frequency range making them difficult to distinguish but Supuration manage to move in such ways that the melodies aren’t muddled in an audible blur. This allows the band explore much shorter intervals superposed on top of each other in order to create the dreamlike twisted universe of the album’s concept. “The Dim Light” shows this perfectly as these two simple consonant melodies collide in a bizarre and unexpected manner as they mesh perfectly to set the tone of the album’s harrowing finale. This opens moments where the band fall into conventional harmony that is virtually non existent within Death metal but use this to bring forth chromatic melodies by inverting the positions of certain notes within the chords. This is what allows The Cube to retain its metal edge during these excursions into non-metal territory. This allows the band to create passages that are purely chromatic but that can interact with the more conventional melodies that the other guitar is performing. An interesting method of composing that is sometimes found within black metal.

There are a lot more compositional elements that make this band unique but that would require a book entirely dedicated to the subject. Its quality doesn’t stem exclusively from how unique it is but how the methods are integrated into the Death metal style and the use of the more traditional metal components. A much better concept album than the overly praised The Key that never got its long overdue praise. The greatest modern metal album of all time and one deserving its place in the pantheon just below the top.

21 thoughts on “Supuration The Cube: Death Metal’s Most Unique Album”