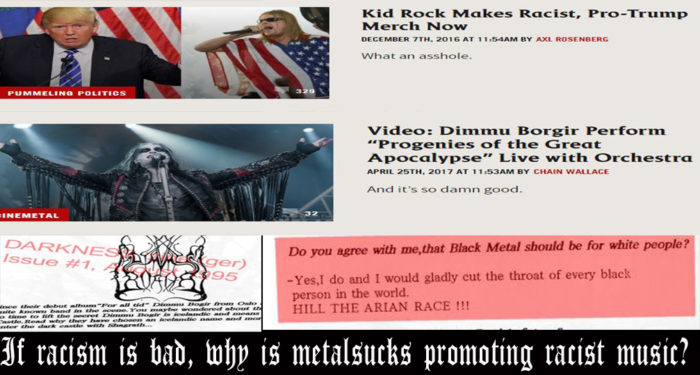 Refer to the above image- a red pill, metal style, from yours truly. The liberal metal media’s most well funded sites- namely Metalsucks and Metal Injection- are a mirror image of the American mainstream media’s enslavement to money and advertisers, dishonesty about the truth, and demonization of outspoken conservatives. What made Kid Rock’s merch allegedly “racist” was simply the made up word “dumbfuckistan.” It did not contain the dehumanizing racist slur used by Shagrath- the man Metalsucks depicted on their cover page. It did not explicitly advocate Kid Rock’s music being only for whites, as Shagrath did for Dimmu Borgir in the above interview. It did not threaten violence against an entire race of people, as the artists that grace the cover pages of Metalsucks and Metal Injection apparently do.

We can see here that the leftist metal media’s “anti racist agenda” is a complete and utter fabrication. The leftist “anti racist agenda” is to appease their liberal advertisers as is their anti conservative stance. They are attacking Kid Rock because he is openly conservative. They showing where to buy racist Dimmu Borgir’s album because they are signed to one of the largest and most financially influential record labels in all of metal. Think about it… the site’s advertisers certainly would not want a PR nightmare with Nuclear Blast, who is paying them to advertise, would they?

Article 5 of the Metalsucks Manifesto (below) states with absolute clarity “Artists who espouse our values will continue to get preferential coverage.” I’m glad that we now understand exactly what those values are.

14 thoughts on “Exposing the Hypocrisy of Liberal Metal Journalism”