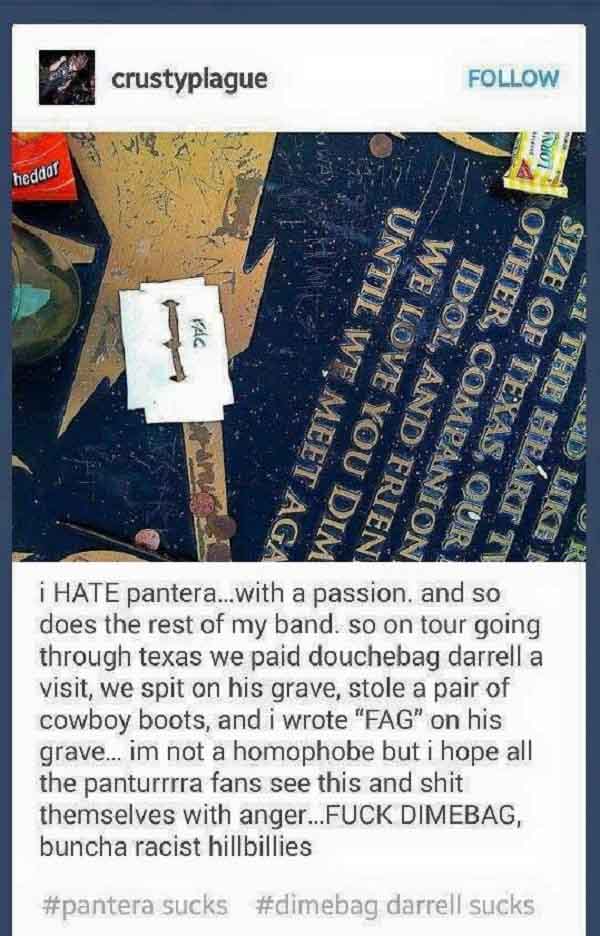 Despite efforts by nearly all parties to deny it, the underlying tension in metal that created #metalgate continues: the “new fans” who want music more like indie rock or punk versus the metal fans who want metal for metal’s sake. The metal fans realize that to be metal is to be an outsider to society and all of its rationalization for its own failure, including “reforms” and “revolutions,” while the punk/indie fans want metal to endorse some of those rationalizations.

The most recent victim may have been Pantera guitarist Darrell Abbot’s grave, which was referenced in an instagram post by the (ex-) vocalist of a crust/black band which embodies the worst of both veins of metal sell-outs, both the sensitive guy indie rocks who like crustcore and the tryhard war metal types who pose as being as hardcore as possible. According to the desecrator:

We paid douchebag darrell a visit, we spit on his grave, stole a pair of cowboy boots, and i wrote “FAG” on his grave… im not a homophobe but i hope all the panturrra fans see this and shit themselves with anger… FUCK DIMEBAG, buncha racist hillbillies

Only forty-eight hours later, the apologies were flowing forth:

The fact of the matter is I feel awful and guilty and this will stick with me forever, just like the Seinfeld guy using the N word… I can not express how sorry I am to Vinnie Paul and the Abbott family for the distress I caused, and the other members of Pantera and other acts Darrell was a part of. I owe everyone an apology for my actions because they were uncalled for, and horrible, despicable, and I went way too far. Some jokes are NOT funny and this is one of them. I took a joke way too far with a piece of paper and some hurtful words and as I’ve expressed, I don’t expect any sort of acceptance or sympathy…I hope at least someone will accept this and I hope for a better future for everyone…

What is shared between both of these sentiments? They are SJW ideas. He attacks Darrell because he thinks Pantera fans are a “buncha racist hillbillies” and excuses using the word FAG because he’s not a “homophobe.” This is SJW language here, first being concerned about policing whether or not other people approve of homosexuality and second in justifying violence or worse against those who are not pro-diversity, a.k.a. “racists.” When he apologizes, he uses the term “hurtful words” and compares his actions to “the Seinfeld guy using the N word” and then states he hopes for “a better future for everyone.” His motivation as a sensitive guy with social justice ideals is revealed in both of his statements.

I will not use his real name in this article, for the record, because public shaming can cause repercussions in this person’s real life, including career and social ostracization. No honest and decent person tries to do that because it is a passive but effective way at destroying the life of another. Nor will I name or link to his band, which has been utterly forgettable and forgotten from lack of any originality as well as blatant bandwagon-riding, because this like the sucker punch at Danzig is simply a publicity stunt that generated more notoriety than was expected. Let the media trick fail on its own.

But this leads us to an ugly point: a metalhead may well be divided by this event. It would be hypocritical for metalheads to start complaining about grave desecrations now after several thousand band photos in cemetaries. It is also nonsense to complain about damage to Darrell’s grave because, as noted by a number of sources, as with Jim Morrison’s grave the majority of the damage comes from fans of the artist and not enemies. 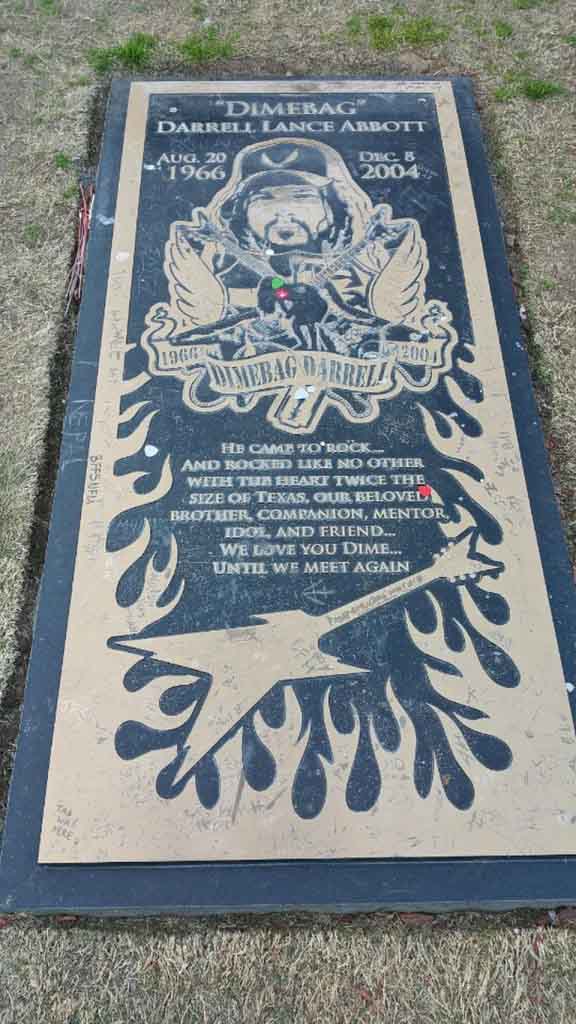 At the same time, however, many metalheads do not feel all that great about this desecration. The reason is that the motivation behind it is wrong. Like the rest of the SJW incursion that prompted #metalgate, the desecration of Darrell Abbott’s grave was justified by SJW-logic: Pantera fans are (allegedly) racist hillbillies, and “homophobes,” so it’s not only OK but “good” (like, in the Church sense) to desecrate his grave because he and his fans are bad. This alone makes the desecration stand out as not wrong in a moral sense, but broken. Someone is using society’s logic against metal to justify making metalheads second-class citizens whose graves may be desecrated, at least for reasons other than the usual war/satan/death that make a good grave desecration. Like the metal fans who object to grave desecrations in general, or the metalheads who claimed that Pantera fans are “nationalist Juggalos”, I feel this misses the point. Society hates metal, and it uses terms like “nationalist” and “homophobe” to justify bullying metalheads, much like it used claims of Satanism and murder back in the 80s to do the same. Its goal remains unchanged: destroy metal.

We should also draw some parallels between Pantera and SJWs. Like the SJW incursion, Pantera was an invasion designed to sell-out metal so it could be assimilated by rock music, with profit for all. Metal sells well, but rock music that has the “rebellious” cachet of metal would sell even better, because rock music has been designed from its inception to be the most easily-digested and emotionally simplistic form of music ever created, like music made into baby food. It sells well because it is a compromise, both inoffensive enough that most people will tolerate it, and thoughtless enough that people like to project onto it their own emotions and needs. Rock music is basically 1950s advertising jingles set to guitars, and people buy it to stay “relevant” or to seem hip, when really it has always been and always will be a product from the same people who sell us junk we can barely afford to address problems we do not have in order to achieve an image we do not need.

The reason many of us detest Pantera is purely musical: it is part of the great Dumbing Down of heavy metal, trying to make it closer to rock/blues so that all the people in sports bars, hair salons, show-off gyms and cube farms can tap their feet to the beat just like they did every other form of rock ‘n roll. Pantera is heavy metal made into a lengthy television commercial, and in doing so, it solicited social approval in a way that is decidely against all that metal stands for and lives by. Pantera heard Exodus Impact is Imminent and Exhorder, maybe Prong Beg to Differ and realized they could make a bundle if they combined a tough guy/sensitive guy approach — a lot like what nu-metal did, come to think of it — and made the music sound a lot more like Bruce Springsteen or John Cougar Mellencamp, both of whom sold more albums than God and retired rich. That was the goal in Pantera: metal as product. For that reason, the Pantera guys abandoned their glam/hair metal and hard rock stylings, and went into Metallica style speed metal with Cowboys From Hell, giving it their Southern rock spin, and then upgraded their sound to angry brocore with the following albums before returning to a blues-saturated swamp rock sound. It worked and people bought it.

Metalheads tend to hate Pantera because it brought in the elements of society that we go to metal in order to avoid: the sleeveless shirt angry guys who start fights in cell phone stores, the blockhead rock fans who are faithless toward any ideal but their own gratification right now, and the musical circle of conformity that forms rock music. Pantera is the anti-metal disguised as metal, much like SJW music like the black/punk (lol) band who desecrated Abbott’s grave is. Pantera not just represents, but embodies, all that metal opposes and all that will destroy metal. If we look back on this story from the future, we will see how both Pantera and these grave desecrators came from the same movement, which is an attempt by the mainstream to destroy and then absorb the once-independent genre of heavy metal.