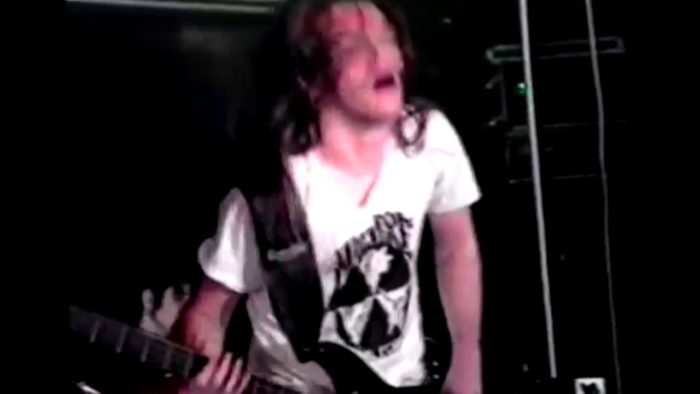 Introduction of the dominant themes:

The song begins with a simple chromatic descent with speed metal embellishments that is both catchy and introduces the oncoming threat in the same way as horror film composers(think of Jaws) by. The step by step descent really enforces the sentiment that something is lurking in the dark while the little open note rhythm keeps the momentum going The declarative statement of the song announces the theme of parasites ravaging a human. After the initial riff has been well established there is an introduction to the climax of the song, rather than forcing the song to achieve its apex immediately the riff is played only by one of the guitars while the other one plays backing chords hinting towards the reality that will strike the narrator.

The chromatic riff returns but with a slight variation allowing Martin Van Drunen’s emotive growl to emphasise the warning of the riff through some vague lyrics.

The composition then diverts into a tertiary motif pointing ever so slightly to the climax while maintaining the chromatic nature of the main theme, as the initial warning deteriorates into anxiety and fear communicated by the subtle change to a more cadenced rhythm.

A swelling on my body
Makes me suffer, live in anxiety
No time to waste
Just open the abscess, will you please help me
The ignorance is dominating
Remedies you try
I can not live this life any longer
What is it and why?

A return to that first theme without the slightest of variations to springboard on to the climax and final revelation of this song. Where many bands recycle riffs through a lack of ideas or ability to make riff labyrinths, Pestilence show the power of using a single theme to anchor a complex set of ideas from becoming a random riff salad. The narrator has a better understanding of the horrors being set upon him as he begins to discern a pattern of the creatures assaulting him . Notice how the drummer doesn’t use the double bass as to really enunciate that though the riff may be the same, the song is continuously progressing with the narrator.

The final piece of the development trades all the syncopation for a full on frontal assault as sixteenth notes charge at full pace with Van Drunen delivering each line through a different speaker to transmit the narrator’s thoughts of doing everything possible to combat this affliction rather than crying about it like a metalcore singer would. The powerful driving riff conveys absolute desperation and builds tension through the lack of resolution at each riff cycle.

Mysteriousness, researchers can’t explain
The sorrow of this eternal pain
It’s burning stronger day by day
Cure me, there must be a way

Desperation, confused mind
Never heard of the disease of this kind
So tell me what can I do
To leave this hell I’m going through

The sixteenth note riff transforms into some dazzling guitar wizardry by Patrick Mameli while Patrick Uterwijk plays a chromatically ascending sequence that strays further away from the root note, forcing the listener to almost beg for some form of release but not before a tempo change. While the riff is certainly very groovy and harkens back to speed metal the perfect fourths and the circular chromaticism form a strong basis for a pensive and elusive solo continuing the building chaos in the narrator’s thoughts. A perfect way of integrating a guitar solo within the composition in mind to push the song forward and not as an exercise in technique.

For a small moment everything stops until what is probably the greatest release in all of metal comes crashing into the speakers as that second theme returns in dominating fashion but this time returning on both sides releasing all the tension by returning to that root note as a mid pitched growl bursts through displaying the reality of the situation through a mixture of bone shattering agony and a revelation that neither science nor god can provide.  A fantastic expression of the human body being pushed beyond its limits as the narrator can only conclude by pleading for external help.

Human blood
The perfect place
Birth of descendants
Creatures living
In my veins the horror
Frightening, sickening
The pain that I am bearing
Begging, please get them
Out of my body

As the last note of the riff leads directly into the final development riff, a technically proficient solo absorbs the momentum taken from the climax and pushes it onto even greater heights without ever sounding pretentious or unneeded.  Though it is the final development riff, the context has changed and what was once urgent yet conscious thought is now man reduced to the primal state of an animal trying to save its life.

Final revelation: The song concludes with the initial theme cut down and a final return to the first part of the climax followed again by an even shorter version of the initial theme.  By not adding new ideas after the climax Pestilence demonstrate restraint and assurance in the overall power of the individual parts.  The cyclical nature of the lyrics reveal that this is an eternally recurring struggle as the narrator has been trying to fight these parasites but with no success as they torment him each night only to fade away at dawn.  By returning to the dominant theme Pestilence jump on to the climax one last time without having to build all that tension from scratch as the listener is taken through one last ride of nature overcoming man and technology.

9 thoughts on “Musical Dissection of Pestilence “Out of the Body””