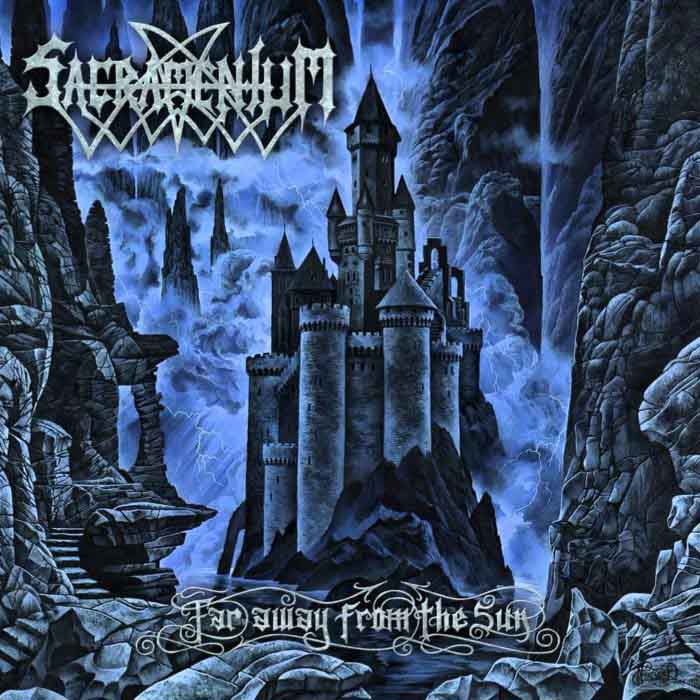 The guitars introduce the song in unison at lightning fast speed remaining within the realm of the natural minor scale only deviating to harmonize fourths which is more dissonant than the traditional harmonization of previous generations but adds more power while not destroying the melody through bizarre intervals. After establishing itself the main motif through repetition, the guitars then deviate with one guitar maintaining the first melody but slightly more streamlined to allow enough room for the second guitar to play a majestic lead melody that twists and turns evoking distant images of the castle seen on the album cover.

One guitar takes a rhythm role playing a cadenced riff of diatonic chords composed of octaves thirds and fourths that guide the lead melody in a grandiose way as both follow the same motion to maintain unity as we are being guided towards that castle. Drums follow the Burzum disco beat as distant dream like shrieks tell the tale of a man who through the power of his dreams drifts away serenely away from other lifeforms into an other world.

I travel as I sleep, funeral silence is cast over me.
As I sleep I feel the night embrace me
and I float under a black sky without stars.
I have seen the eternity,
I have seen the eons rise in my dreams.
Light of heaven is fading away, as I fly away from the sun.

Blast beats emerge in full fury as a variation the first melody reunites both guitars until the lead guitar plays a descending melody allowing the vocals to return but with slightly more vitriol. The melody is carved from the same notes as the melody that appears just before the main theme. It maintains the effect of approaching a grand castle but by being slightly different it shows progress towards an actual conclusion. The narrator sees the entropy of the world begin to control his soul but he does not fall into the trap as there is a voice that whispers for him to continue deeper.

A riff played through a flanger with the chords from the main theme broken down into arpeggios as the drums slow down, signifies the crossing over into a dream like world that feels different from ours. The tempo is maintained but the notes are played in eighth note triplets giving the illusion of a tempo change that is fluid. The lead guitar plays a faint melody behind until both guitars unite.

Both guitars unite to play a long stream of tremolo picked chords that oscillate between a harmonic and natural minor scale sequence. The stunning repertoire of chord shapes is on full display but Sacramentim intelligently never use more than two different notes except for an octave knowing that it will surely come across as either sounding pretentious or weak. The juggling between melody and power never ceases to amaze. The drums play fills as a powerful screech emerges announcing the end of the dream sequence and onto something much more tangible. Awoken from his deep slumber our narrator describes his perfect vision of heaven that resembles the great Swedish forest yet devoid of life and encapsulated in a dreamlike aura.

I entered a mystical grey dreamvoid
Which I had no access to.
The atmosphere were dim and cold,
Harmonic with it’s purple.
I flew through a stunning beautiful landscape
Of frozen forests.
A building began to rise far in the distant,
Where the sky meets the sea.

The melody that has continuously evoked the castle seen on the artwork returns but transposed slightly higher up and with notes changed accommodating the transposition so that the riff stays relatively in key. It’s possibly the most majestic riff in the existence of metal through it’s allusions to the major scale which is known in classical music for it’s grand yet joyous character, but the riff never fully embraces keeping it’s strength and not falling into the pitfalls of complacent happiness. It now pierces through and shows greater clarity as our hero realizes he can now see the castle and is quickly approaching it. The castle belongs to him and is not of this world, it belongs to the divine section of himself and relegates all else but the landscape into nonexistence.

In the faint horizon
A castle began to take form
Surrounded by ice mountains.
The castle of myself.
As I drifted closer I knew I was there,
In my divine dimension
That my visions had shown me for years.

A variation of the main theme returns to announce the end of this epic voyage. The castle is fully erect and the vocals continue but this time with more confidence and even a sense of relief as the narrator has achieved his objective and can fully live out the rest of his days in isolation away from the lunacy of man and his poisonous motivations. The lead guitar adds a continuous pedal note in a way a lot of hipster bands do so for the sake of having more sound but here it really emphasizes the feeling of grandeur that has come to fruition in the protagonist’s mind. Where death metal relishes the grand climax, here there is no such thing as the journey is just as important as the destination as no matter how we live, we all end up in the same place.

The vocals have gone away and the drums have slowed down. Tremolo riffs have been replaced with a singular melody played in triplets. The hero has long died and the beauty of his world is a distant echo of a land that was immune to our world’s light. The diatonic minor thirds close off this epic song while retaining the joy of an uninhabited world but this time the grandeur and joy has been replaced with entropy due to the fairly static nature of the riff.

A truly powerful song by a genre that was inundated by terrible music at the time. The melodies are simple to play and the note selection being limited compared to a lot of bands are conceptually incredibly complicated. Counterpoint and polyphony run rampant yet the cohesive whole does not suffer for it. There is rarely any repetition but this avoids the associated pitfalls of riff salads through a concise musical language and the exploitation of the melodic narrative. Never has an album come close to completely exporting the innate melodic capabilities of black metal and Sacramentum cement themselves as the undisputed leaders of this mostly asinine microgenre.

26 thoughts on “Sacramentum “Far Away From The Sun””