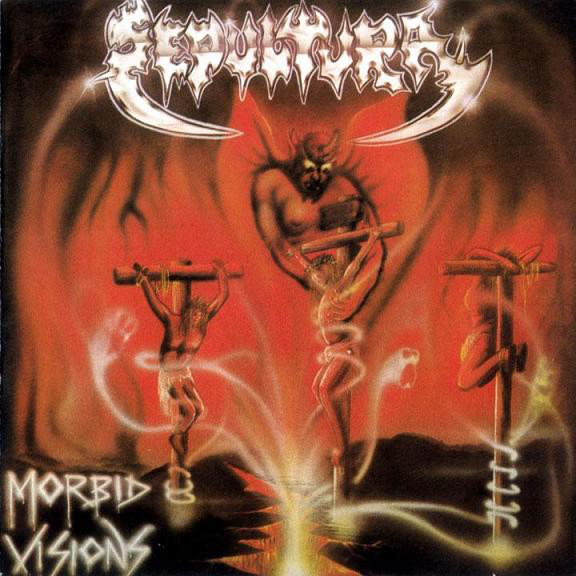 Sepultura’s goal was to bring the fury and violence of hardcore to early proto-underground metal. While writing Morbid Visions, Sepultura weren’t listening to any metal other than Slayer and Possessed, preferring the most aggressive hardcore punk of the time such as Discharge, Siege, and The Exploited. Metal had only just begun to leapfrog hardcore in aggression with Slayer, the Teutonic bands, and Bathory. Now Sepultura.

With rhythm guitarist and vocalist Max Cavalera solely focused on writing riffs on four strings, Morbid Visions was mostly composed by then lead guitarist Jairo Tormentor. His song structures followed the progressive model of Voivod and Slayer‘s Hell Awaits, which, inspired by Mercyful Fate, defined death and black metal composition. Riff changes and variations struck as profoundly thunderous chromatic inspirations from the gods; the forces of chaos themselves bent to divine mandate.

Igor Cavalera’s drumming was a much more violent version of the peculiar pickup beats of Discharge and Sodom. His fills sounded like he was falling down the stairs and somehow miraculously landing on two feet. Bestial Devastation was actually the first time he had ever played on a full drum kit and Morbid Visions the second. This primordial skin bashing added a sense of polyrhythmic, nitroglycerin texture to the cake. Igor’s drumming would be a huge inspiration to Fred Estby in Carnage and Dismember, Abbath‘s tape-sped efforts on Pure Holocaust and Battles in the North, and now Serpent Ascending.

The actual instrumental tones and production of Morbid Visions perfectly accomplished an atmosphere of apocalyptic chaos. The drums were hollowed out, ringing thumps like the feet of hordes of moaning sinners raised from the grave by Satan to rend the God-fearing masses. Guitars were thin and totally out of tune, sounding like the fallen angelic spirits rising out of the Ark of the Covenant in Raiders of the Lost Ark only this time to rip the faces off the air guitarists, wispy-mustached Metallica fans, and drunk bar crawlers wearing sideways Suicidal Tendencies caps who had infiltrating speed metal. Morbid Visions showed that Sepultura were then, despite their future sellout bongo career, ready to take metal to unheard of levels of sonic violence, snuffing human life out by cracking skulls open to exterminating the bloodlines of the unworthy in an underground struggle for existence.