While the new last.fm redesign seems to me another exercise in pointless self-justification by middle management, the ability to see statistics on my listening has entirely changed how I view the music held closest to my heart. Seeing the numbers has shown me how it is one thing to list a band as a favorite or recommendation, and one far different animal to listen to it on a monthly basis. One is assessment alone, as if listening were your sole task, and the other utility, showing that this piece of music has a place in your life of many tasks and goals.

This assessment filters among the upper level of the highest echelon of metal. The assessment itself filters out the nonsense, all of which suffers from a single sin — disorganization — which takes many different forms but reveals a lack of will, purpose and principle in constructing art and always red-flags a directionless listen. But among those bands who have escaped the madness, there is no equality in listening. Some have risen and some have fallen over 20 years of pounding out metal from my speakers as I work or relax at home. In most cases, the reaction was first shock and then realization that the seeds of this knowledge were there all along. Let us look at a few pairs where listening habits elevated one album over a similar one…

Blasphemy Fallen Angel of Doom vs. Blood Impulse to Destroy 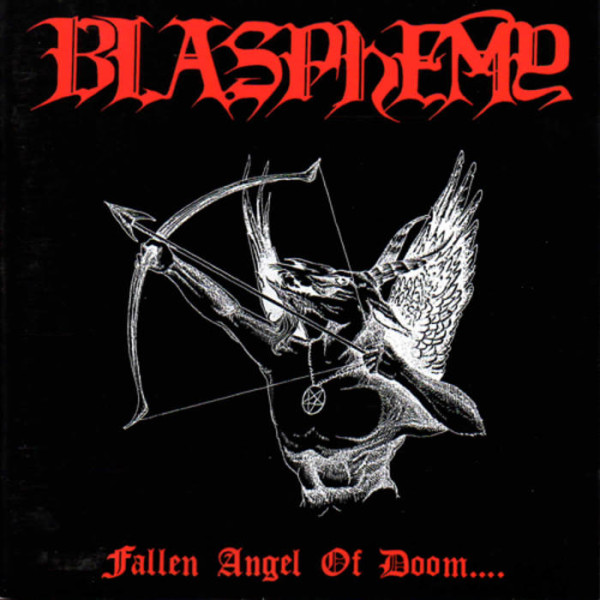 Over the years metal has frequently benefited from punk influences because metal, as befits its partially progressive rock heritage, has a tendency to create layers of abstraction and complex musical discourse where punk cuts to the chase. This is both a strength and weakness for each genre; metal is abstract, which makes imitators very obvious but can get lost in muddle-headed musical wanderings, and punk is concrete, which makes it effective but imitation easy. Blasphemy introduced a punk-based genre, grindcore, into black metal. It adopted the aesthetic approach of Sarcofago but underneath applied the percussive lower-five-frets texture musik of grindcore. The result is very effective, and easy to listen to, but also — if you have many other options — kind of boring. In fact, many of these riff patterns are the same ones, albeit simplified, that speed metal bands tried and failed to use to revitalize that genre. As raw motivational material, the music is fantastic, but over time, it fades a bit as one realizes that its strength as low-complexity high impact music also means that its content is one-dimensional. Over the past 20 years, I have thrown this record on five times and apparently terminated it early each time. 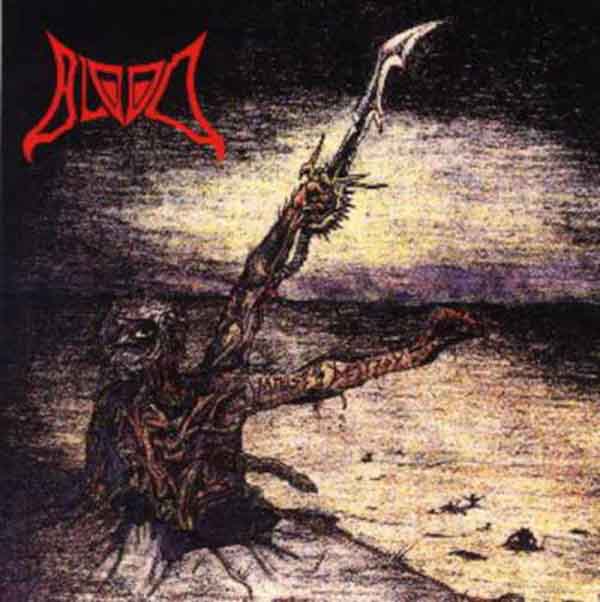 I chose Impulse to Destroy because Germany’s Blood also occupies the narrow space of grindcore bands who think like black metal or death metal bands. Grindcore generally self-reduces to extreme minimums and must, like junk food, reintroduce sugar and salt at the surface to spice up the otherwise one-dimensional utilitarian approach. Death metal on the other hand is not utilitarian, while it is consequentialist (“only death is real” being the ultimate statement of that belief) and yet also has a highly aesthetically-motivated but not aesthetically-expressed transcendental outlook. At its best, grindcore overcomes its utilitarian tendencies for a ludic or playful view of the collapsing world, and from that some of the best material emerges. Blood for example creates a dark and morbid absurdism which brings to light all that our society suppresses with itself, and like Blasphemy, creates it through patterning cut from the chromatic strips of the lower registers of guitar. In this case, however, the textures take on a life of their own, like a three-dimensional house made from flat punch-out cards. Different riffs interact with one another and dramatic pauses and collisions give rise to interesting song structures. Like Disharmonic Orchestra Expositions Prophylaxe, Impulse to Destroy provides a wealth of riff archetypes applied with enough personality and purpose to create unique compositions which may be enjoyed for decades or longer despite their simplicity.

Napalm Death Scum vs. Carbonized For the Security 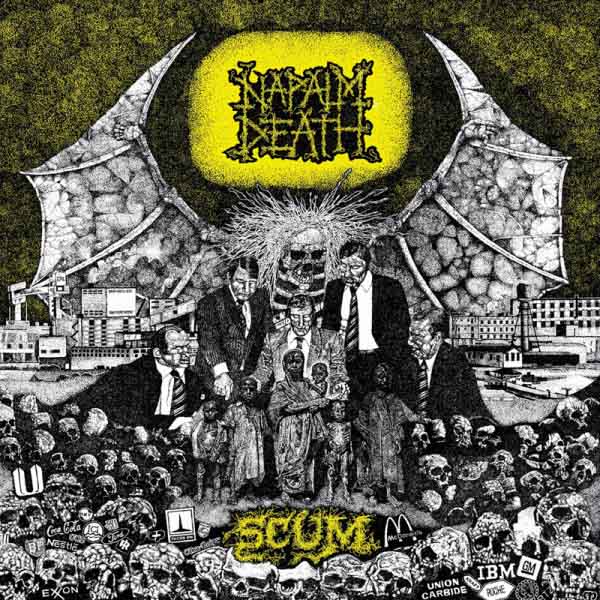 This is one of those albums that most people get for the sake of novelty. “But check these guys out, they’ve got one second songs and stuff, it’s just about noise…” — rock music does not get more ironic than that. And ultimately, that was the power of grindcore. Like punk a decade before, it removed all the pretense of rock and boiled it down to simple songs. It then sometimes added in new flourishes of song structure which made those songs more interesting than radio pop, which had been studied by MBAs and PhDs and reduced to a simple formula distinguished only (barely) by rhythm, production, instrumentation and vocals. But once the money men and white lab coats were able to look at rock as a product like any other, they saw that to please enough people in the audience to make it a hit, they did not have to innovate at all. They only needed a new skin for the same basic patterns and they could produce it over and over again with high margins (well, until digital piracy hit). Like the punk rock and then hardcore punk, grindcore stripped away illusion and replaced it with innovation. The problem here is that these songs are very similar themselves because they rely on dramatic confrontation within each song, which like all things “turned up to 11” becomes expected and thus a sort of background noise. Every time I have listened to this album it has made itself into sonic wallpaper before the halfway point. 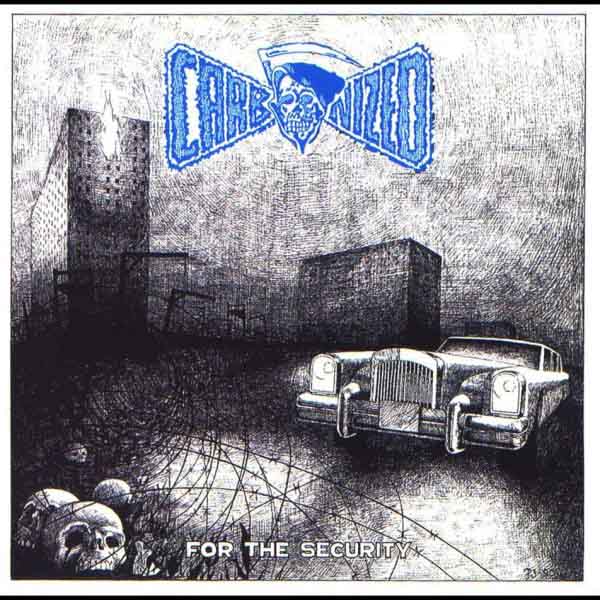 Some of the albums which were considered “also-rans” back in the 1990s had more to them than people initially considered. This one has been a favorite for me, along with the second album from Carbonized but not the third, for two decades. I listen to it regularly, finish the whole thing, and sometimes start it over. Record labels tried to shoehorn Carbonized into the “death metal” model despite some clear warning signs, and consequently bungled — the root of all evils is incompetence at some level, starting with the ability to be honest — the career of this promising band, but for those of us who lumped this in with aggressive grindcore like Terrorizer and Repulsion, the similarities outweighed the differences. For the Security expresses paranoia, existential insecurity, melancholic doubt of the future and a desire to explore all that life offers in depth, all within and as part of the same outlook. This is the music of a brighter-than-average teenager who perceives the world honestly and rejects the foolishness but wants to look deeper into the interesting stuff that, because it does not affirm the dominant lie, is rejected by the herd. Chunky riffs alternate with broader rhythms derived from punk and yet are dominated by a desire to make song structure vary with content inherited through metal from progressive rock. Each song forms a sonic sigil to the topic at hand and the response of the artist, making each bursting with personality and reality portrayed in finely-observed ways at the same time. This is a masterful album which will never bore.

As you can see, Dear Reader, these albums are both quite similar on the surface — and quite different underneath. That bands can do so much with a handful of power chords, and have such different outcomes, is endlessly fascinating. Yet not every metal-influenced album is, even among A-listers like these. It may be time for all of us to go back through our listening, search ourselves honestly, and see what has actually stood the test of time.