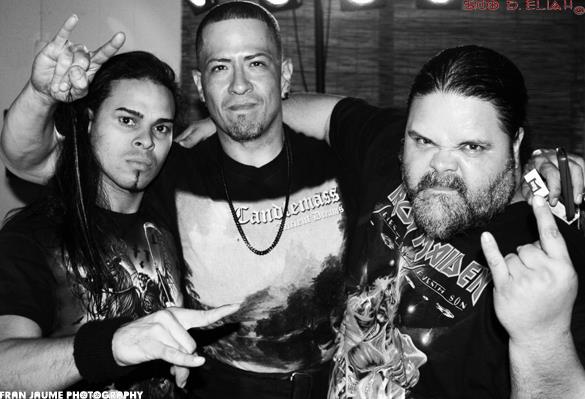 Many years ago, when I was desperately buying up any and all death metal to feed the voracious ears of the listeners of an underground metal radio program, I stumbled upon an album by a band called Organic Infest. The cover used unusual covers, but was dripping in gore-imagery, so I gave it a listen.

I quickly found what was in my estimation one of the undiscovered high points of that fertile period, which was a band that creatively merged the American heavy death metal sound with a European sensibility and its own articulation. Like many of those early bands, Organic Infest wrote their music from a viewpoint that was their own, and thus they made convincing music despite struggles with production and distribution.

Two decades later and very few bands achieve this ability to write from their own viewpoint. Many are able to adopt the musical language of others; this can turn out well, but usually does not. Some come up with their own perspective, but it doesn’t correlate to their actual inner feelings or the outward order of the world, so it’s of little relevance to anyone but themselves.

Organic Infest (now Organic) has kept up their own unique and relevant work during this time. To many of us, their uncompromising spirit and clarity of vision makes them an undercover standout to this day. For that reason, it is with great pleasure that I introduce bassist “Chewy” Correa from Organic.

I understand that some years ago you changed the name of the band from Organic Infest to Organic. Why did you make this change, and do you think it reflects a change in how metal bands are naming themselves and seeing themselves at this point?

We decided to make the change of the name in 2005 after our original guitarist left the band. The main reasons for Juan my drummer, and I to make the change on the name were that we wanted a new beginning for the band and also the lyrics. The lyrics were gore type in the beginning so the name Organic Infest was good then, but I started to write in a more diverse way so the name Organic gives us more freedom in terms of themes for songs. Well, we think that the name of the band is a thing not to be taken lightly. After all it is what will represent the band worldwide and the name in our opinion should be like the main theme for the band. I know many bands these days that use a name just because it sounds “cool,” and when you read their lyrics they have nothing or very little to do in relation with the name.

As I recall, you’re a bassist and Organic lost a guitarist, so you began using a higher-tuned piccolo bass instead of guitars. How has this worked out? Has it changed the way you write songs?

After a lot of experimenting, I finally have the sound that I wanted. This piccolo thing came out as a solution to our problem. When our original guitarist left and we changed the name to Organic we found an incredible guitarist ED Díaz, but after one year and nine months he left the band too. So one day my drummer Juan told me, “man put some distortion to your bass and let’s just play.” At first we were joking about it but then the idea became real after I listened to a fusion bassist named Brian Bromberg who uses a piccolo bass like a guitar on his album “Metal,” so I said to myself if he does that in fusion I will do that in metal. About the songwriting it did not change for me because all the material I wrote when there were guitarists in the band I wrote with the bass. The process stayed the same with the addition of me doing the guitar parts on my piccolo bass.

Back when you were Organic Infest, you put out the album Penitence way back in 1993. In fact, it’s been 20 years recently and you commemorated this by streaming all your albums on your website. What do you think of Penitence looking back at it now?

Well, in my opinion it is the work of young and inexperienced musicians playing what they liked the most at that time. I am not saying that the music is bad, but obviously we could have done something way better at least on the production side of things. If you read all the reviews for that album they all agree on the same, cool music with very bad production.

How do you think metal has changed since that time? Does the underground still exist?

Metal has changed a lot since that time in many ways. Those times were really difficult for everything, from promotion to recording. Nowadays, promotion is a breeze with the internet thing, and recording has become the easiest thing with more and more bands being able to have their own home studios. On the other side, nowadays is also difficult in terms of competition. There are thousands of metal bands now everywhere, all wanting to have their shot at being the best. The underground still exists, and will exist forever because there are always underground bands playing those obscure gigs that the more established bands don’t want or like to play because they are not good for exposure.

Many were critical of the production on Penitence and other recordings you have released. Do you think they’re right, or is this a “the production (medium) fits the message” argument like certain black metal bands have advanced?

Yes, I totally agree that the production on Penitence is probably one of the worst metal productions in existence but it was the result of what I mentioned before: our total lack of experience and a recording engineer who just wanted the money and practically ripped us off. The production on the Agony EP, was a bit better but it was recorded on a moderate home studio so we could not really do more than we did. With The Way To Temptation album the production I think is a decent one; it could have been better but the guitarist was the only one attending the mixing sessions so Juan and I had almost no input on the mix at all. We expect that our new recordings will finally have a good overall production that our fans can enjoy.

Do you feel you have had an inverse relationship to trends in metal? For example, they go black metal, and you head toward percussive choppy death metal; they go death metal again, and you come up with more tremolo picked material.

Definitely! I hate trends, whenever there was a trend growing I would always go the opposite way, and still do it like that. For example, our new material is completely different, while many bands are heading for a more modern stuff while we are delving deep in our influences and musical roots.

What do you view as your influences? What genre(s) do you feel you combine or create within?

The three of us have many different influences. For instance, for me Metal is my religion and main musical genre, but I also like and listen to classical, fusion, and flamenco. As far as metal bands go we listen to everything we like from bands like Iron Maiden to Cannibal Corpse and everything in between. Genres that we combine… everything metal. We have doom, speed, power, thrash, death, and black metal, all combined in our style and sound.

Elsewhere, you mention that Coroner is your main influence. How does that manifest in your music?

Yes, for me Coroner is the biggest influence along with King Diamond, Candlemass, and Death. I have their influence and it reflects in my songwriting, but I always try not to sound too obvious or like a copy. It manifests mainly on our mid-tempo riffs, and on the more technical stuff.

Can you tell us what the status is of Organic at this time — do you have more releases coming up, and will we see you on tour in Puerto Rico or the mainland?

Our status at this time is very good and focused one. Yes, there will be more releases coming up and many good things and shows for the band in Puerto Rico and internationally. I definitely think that this next 2014 is going to be a great year for us.

How do you compose songs? What do you start with (an image, an idea, a riff, a scale)? Has this changed with the departure of your guitarist?

The process of composing for me is different every time. Sometimes I come up with complete lyrics and how to sing them and everything, then I add the music and bring it to rehearsals and we arrange the song. Also there could be times when we come up with something good jamming on a rehearsal and later I compose around it and bring the finished material to a practice session, and then I add the lyrics. The scales that I use for composing the most are the Harmonic Minor, and the Half/Whole version of the diminished scale, along with the Aeolian and Locrian modes.

I know there’s a metal conference coming up which is designed to discover the roots of metal as a community. Will you be offering your view there? What is “community” in metal?

The conference will be a great event. We will definitely be present at the conference, because we are part of the history of our metal scene. “Community” in metal refers to everyone from the bands to the fans that attend to the shows and events that deal with the music we all share as our form of expression. Also refers to the cultural aspects that represent what we are in our social environment.

Organic Infest had a hiatus between 1993 and 2001, if I’m reading these other interviews correctly. What made you decide to come back? Are those reasons still going strong?

That hiatus happened because our original guitarist left the band for the first time to move to the United States after he got married, looking for a better life. He decided to return to Puerto Rico and in 2000 we got together again because we wanted to continue with what we like to do the most, play Metal!!! Definitely those reasons are still going strong, and will be until I die!

Are there any plans to re-issue your former works?

Personally, I have always wished to know what Penitence would sound like with better production. Even though that is not the style we play anymore, and I might do it one day, maybe even sooner than many people think. Maybe not only Penitence, but also some of the older material like the song Organic Infest from our “Drown In Blood” demo.

Well Brett Stevens and Death Metal Underground, on behalf of Tony (bass), Juan (drums) and myself (Chewy, piccolo bass and vocals) thanks a lot for the great interview and your support to the band. We will keep you informed on the bands new releases and important shows so people can follow up through your excellent website. Hails!!!