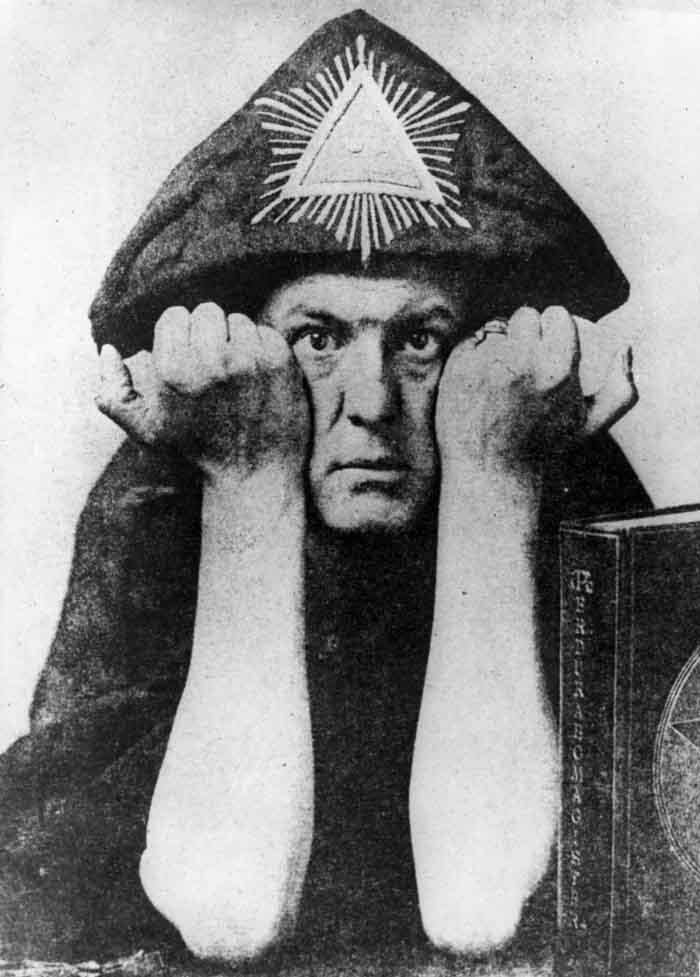 “Meeeeester Crowley, what goes on in your head?” came the wailing voice from the radio. Louder than that, I could hear the fluorescent lights above, and the beating of my heart. The texture of the paint on the walls seemed to break into a kaleidoscope of demonic faces. And I deserved all of it, because I had put myself here, smoking the tobacco of the Great Beast, Aleister Crowley himself.

The decision happened several weeks ago when I was reading about Crowley, a life-long pipe smoker, and his odd preferences for tobacco. Never a huge reader of Crowley — I’m more into Anton Long and Aldous Huxley for weird metaphysical science — I became interested when I read that we have no solid record of what he actually smoked, only a network of hints through his writing and rituals.

My first task then was to figure out what Mr. Crowley was indeed smoking. Lore holds it that he smoked “straight Perique soaked in rum,” but this leaves much open to interpretation. Perique originally referred to the tobacco that Pierre Chenet, having learned the method from the Choctaws, would press and ferment in barrels in what is today St. James Parish, Louisiana. This thousand-year method reduces acidity and sugars in the tobacco so that the body can absorb more of its indole alkaloids.

Unfortunately, after that time the use of the word became muddled. Some blenders coined the term “Perigue” for any Burley which had been pressed and aged, creating a fermentation effect. Sailors used to pinch some of the raw tobacco from their cargoes, soak it in rum and wind it tight in old sails to press it. And as Perique production dropped off in the 1950s, not only did some inferior substitutes arise, but many blenders phased it out of their blends, creating more confusion.

This left we step one to pipe smoking union with the Great Beast: figure out what he was actually smoking. Smoking the “real” Perique from St. James Parish seems unlikely because Perique is used in tobacco blends like a condiment in food. It has a strong peppery and fruity taste, and smoking it alone would be like drinking hot sauce or eating raw onions. Perhaps he smoked the Perique of the sailors, or “Perigue” of ingenious tobacco makers. But as with all things in his life, the clues are hidden and numerous, stretching across time and space…

First we turn to Crowley’s writings including The Diary of a Drug Fiend, in which Crowley mentions his tobacco preferences: 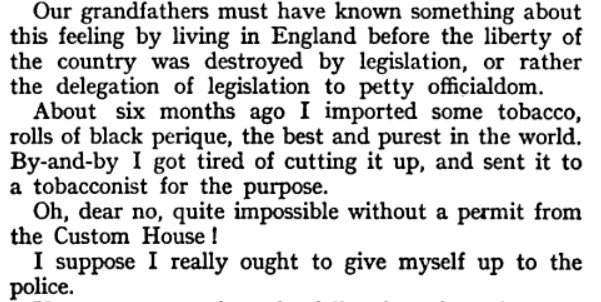 This deepens the mystery, as Perique is mentioned nowhere else in the book. Crowley mentions ordering “rolls of black Perique” which he then cuts manually, bringing to mind the Perique of the sailors and not of St. James Parish. But even that cannot help us, because St. James Parish Perique could also be delivered in “rolls” or “ropes,” a popular method of curing, storing and transporting tobacco. Ropes remain popular to this day, and are prepared as Crowley describes: cut into thin slices, or “coins,” they are then pushed apart with friction or “rubbed out” to produce thin-cut leaf tobacco.

So that tells us nothing, basically.

Perique remains popular today, by the way. Smokers favor it for its deep flavor and strong Nicotine content, as well as the way it can complement other flavors like Virginias (sweet) and Burleys (nutty). But to smoke it straight is unheard of, although a few brave volunteers have tried it. For that reason, many smokers are skeptical that Crowley actually smoked it straight because it is an abrasive, disquieting experience that would not have been much fun — and Crowley was a known hedonist.

This returns us to the question of what Perique Crowley was smoking. If he was smoking rum-dipped and sheet-pressed tobacco, he would have been enjoying a much milder blend than the St. James Parish Perique. But if he was smoking the St. James Perique, it seems unlikely that he was enjoying the pipe at all. Then there is the complicated term “soaked in rum.” Did he mean actively wetting it with rum? Or did this merely refer to the rum used in the sailor’s recipe, and indicate that it was not St. James Perique at all?

Luckily, Crowley hid another clue for us in his satirical social commentary, Not the Life and Adventures of Sir Roger Bloxam, in which he refers to the tobacco he kept around his darkened lair:

Admiral Fitzroy, by no means the least of English poets, was wont to observe — at least he was always putting it on his barometers — “Long foretold, long last: Short notice, soon past.” So please settle down in that Oxford Basket Chair, draw the table close, for you’ll need that jar you bought at Bacon’s in your first teens because Calverle hypnotized you into doing so, fill the old Meerschaum (the nigger with the hat is the sweetest) with the pure Perique of St. James’ Parish Louisiana, throw some coals and a log or two on the fire, and put your legs on the mantlepiece; for if the laws of weather apply to literature, this ought to be a terribly long chapter.

You can smoke a pipe, and find the port, while you wait; for I’m in no mood to write it just now. Do you realize it’s half past three in the morning?

Not only does he tell us what his Perique was — the St. James Parish variety — but by using the word “pure,” he puts emphasis on the fact that this is the Perique he wants, and nothing else will do. In a strange twist of fate, the use of St. James Parish Perique may strengthen his narrative, because if it were shipped to England it would most likely be in ropes to keep them moist for the journey, especially since Perique is sensitive to light (like the Great Beast himself) and so is often stored in forms that hide most of the leaves from the light.

(The unfortunate verbiage in the above quotation describes his Meerschaum pipe. Meerschaum is a soft semi-gelatinous stone when wet, and clever people carve things into it, then let it firm up as it dries. He is undoubtedly referring to the subject of the carving and not an actual person.)

That left only one mystery: the “soaked in rum.” He could not have meant that he drenched the tobacco in rum and then lit it because it would not have burned owing to the high water content in rum, although he would have gotten a blue alcohol flame. That suggests that his use of the term “soaked,” much like it is used today, refers to a “top flavoring” or an alcohol-based flavoring sprayed over the top of the tobacco before a final drying. Tobacco is very sensitive to moisture and molds easily, making it toxic, so alcohol is used by the water in it must be allowed to evaporate. Rum is about 40-80% alcohol.

This means that Crowley bought his Perique, cut it into leaves of a size he could smoke, and then soaked it in rum but then dried it before smoking. At last I had my recipe for going insane with the best of them. As I made preparations, I wondered if I would end up in a strange photo, making horns on my head with my thumbs, my gaze straight ahead and fixed as if on some demonic world beyond.

Step 1 was to acquire some blender’s Perique, which I did from Rich Gottlieb over at 4noggins. It comes in two forms, granulated and long ribbon, but the long ribbon is stronger so I got that and sliced through it a few times to make it easier to smoke. Then I put down a plate and dumped the Perique on it, watering it loosely with rum (some Captain Morgan’s I found under the couch) until there was some standing liquid in the plate. That, I thought, should be an adequate definition of “soaked.”

Step 2 was drying. The plate went into the cupboard and was sealed away for several days, only exposed to the light for a daily turning. The rum gradually evaporated entirely, leaving dry and stiff leaves. Sitting in my kitchen, wishing to ancient gods that I had an EMT team present in case I had made this tobacco blend wrong, I loaded up an old faithful pipe — I have no other kind — and gravity-filled it with these strange leaves, then dumped in some more and tamped the top. Time for Step 3. I took a deep breath, lowered the flame, and drew in the thick and ethereal smoke.

Pipe-smoking is not like cigarette smoking. It is more like playing a trombone or transcendental meditation: all in the breathing. The smoker starts with a blaze that sends up a lot of smoke, which is why smokers take short puffs at first; pipe smoke is not inhaled like that of cigarettes, but kept in the mouth, so short puffs are need. Then, the smoker draws on the pipe like sipping air through a straw, about every ten seconds filling the mouth with smoke and exhaling a few moments later. This keeps a steady stream of flavorful smoke through a cool pipe, delivering measured doses of nicotine to the nervous system. After a few moments when the paint screamed at me in ancient Syriac incantations, and the stove looked like the face of an Aztec war god, I settled into a normal rhythm.

And…? you ask. How was the Great Beast’s tobacco?

Good. Very good, in fact, so much that I’ve done it several times since. The rum both sweetened the Perique and removed some of its peppery edge, leaving it with a flavor more like strong brandy. The drying also reduced the wetness of the Perique so that it burns better, and somehow gave it a smoky flavor like Latakia or Dark Fired. While the Nicotine level remained high, it was more on par with my regular tobacco, Royal Yacht, and not as extreme as many ropes or the utter skull-crusher that is the Cotton Boll Twist. And the flavor toned down the spice in the perique while making its fruit flavor less extreme, giving it the complex scent and flavor palate of a fine wine, or at least what I imagine wine above the $7 limit tastes like.

I kept smoking. Strange — I was enjoying this! The flavor had gone from plum or fig to something like a dark berry dried in the sun, or even grapes at the edge of becoming raisins, but with that extra kick of spice that made the tobacco taste more vivid than sweet. The smoke curled around my head and for a moment I thought it spelled out something in Kabbalic and Alchemical characters, but then it dissipated. I shook my head clear and kept on smoking. The Great Beast may not have taken my soul, but he knew how to make a tasty tobacco blend.

3 thoughts on “Smoking straight Perique with the Great Beast”