Today, Hells Headbangers announces August 15th as the international release date for the LONG-awaited debut album of South American legends Death Yell, Descent Into Hell – blasphemously, the day marked for the Assumption of Mary. Death Yell had a very short but intense life in the late ’80s until they abruptly split up in 1991. For good or bad reasons, their unique demo Vengeance From Darkness became a referent and even influential for many brutal death/black metal bands and ‘bangers, raising the band – even after all these years – to the level of an emblematic and even cult name from that time.

Death Yell reunited 20 years after they broke up to come back with the recording of Back From the Depths – released in 2013 through Hells Headbangers as a split 7” with Atomic Aggressor – which received countless praise from zines and fans worldwide, showing they had not lost their eerie occult style. Since then, the band have been busy playing live and regaining the position they deserved, having recently joined the Nuclear War Now! Fest V in Berlin.

Says founding guitarist Andrés “Pollo” Lozano about this highly anticipated release, “Descent Into Hell is actually our first full-length after 30 years! We are very pleased to become part of the Hells Headbangers legion, as we wanted to work with a specialized, serious, and well-known underground metal label in order to materialize this project.”

He adds, “It took us quite some time to decide about recording this album. We had to make the decision about either burying the band definitively or take the risk of resurrecting Death Yell… Eventually, we just did it and made all in our hands to keep our original brutality intact. We are quite sure that Death Yell fans will not be disappointed.”

Indeed they won’t: Descent Into Hell not only sounds like its title, it sounds like the fiery, furious work of men half their age. Maintaining that surging, sulfurous sound of their early years but emboldened by a maturity that never threatens to dilute their maniacal rage, Death Yell hit a fever pitch early on on Descent Into Hell and never let up, letting loose one propulsive missile after another. Their attack is finely honed, enviably executed, but never sterile; similarly, the production across the album locates the fine balance between grit and gleam, clarity and crust. Through it all, Death Yell unfurl serpentine solos that intoxicatingly create an atmosphere of eldritch rot and nameless horror. Completed by blasphemous cover art courtesy of Marcelo Vasco, who’s also created the latest album covers of Slayer and Kreator, Descent Into Hell is THE debut album Death Yell needed – and succeeded in surpassing. Hail the old gods!

In the meantime, the opening track “Soulless” can be heard at Hells Headbangers’ Bandcamp HERE, where the album can also be preordered. Cover and tracklisting are as follows: 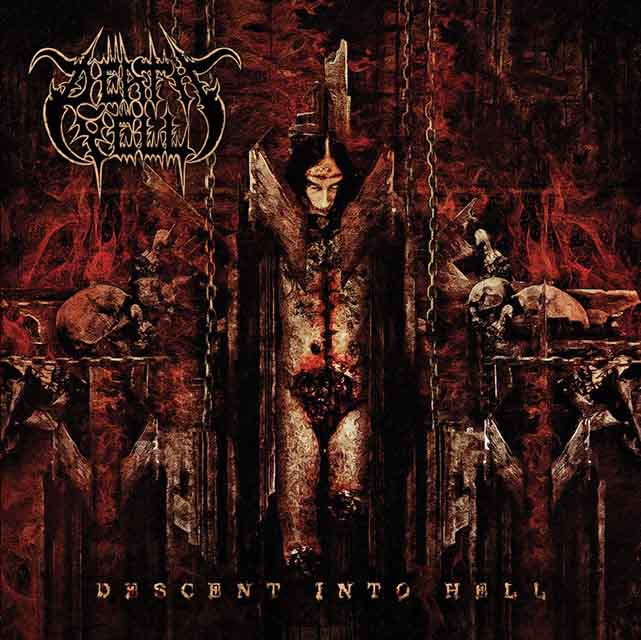