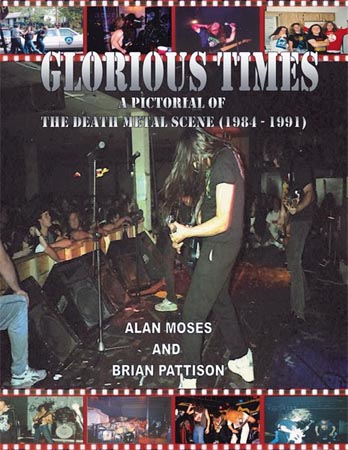 Click on the cover picture above to see the flyer featuring Chris Reifert for the new edition of “Glorious Times”.

We reviewed Glorious Times: A Pictorial History of the Death Metal Scene 1984-1991 before, describing how it is a collection of first-hand retrospectives on the formative years of the underground metal scene that is motivating people to restore these older values in newer metal music.

Thanks to the rising interest in the book, what was once a limited edition has returned as what we hope is a regular product. Check it out:

After MUCH tenuous effort, we are extremely proud to announce that our revised and extended edition of ‘Glorious Times’ is currently finished, and now in the hands of our new printer.

Bigger and better than before! 160 pages of massively rare and mostly unseen photographs, tied together with sentiment and reflections from the very people who lived the era – the GLORIOUS TIMES.

Price per copy is $30 plus $3 shipping and handling.
Payment can be made by PayPal to glorioustimesdeathbook@gmail.com

This book is not designed to be perfect or even convenient armchair reading for the detached casual audience. It’s for the diehards. It’s power is in the content; not all of it, because some metal bands cannot even be edited into coherence, and the coverage of the evolution of the first generation of death metal. After this, death metal picked up steam, became a known style and had a different set of challenges. But if you want to watch it emerging from the primordial soup of speed metal, punk, thrash and extra-musical influences (Lovecraft) here’s a good chance.

I find it interesting — and I mean this in a good way — how nerdly and awesome these early founders are. Some are partying/mayhem types, but most of the rest strike me as intelligent, curious, introspective people who got failed by modern society because it’s a dying shroud of a pleasant illusion. These people aren’t hipsters and literati, but they think about life, and find meaning in concepts and art. That puts them ahead of most of this moribund species.