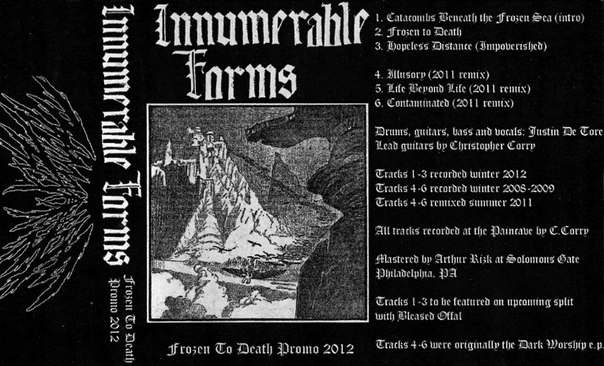 Innumerable Form’s Frozen to Death is a compelling and brief release which recalls Dark Descent’s roster yet avoids the calculated, clean retro nostalgia trips that mires their outfits. Motifs follow in the Darkthrone tradition of John Carpenter managing menace on a Casio. The melodic component of Innumerable Forms is steeped in Finnish death metal which delivered mystical melodies that sounded as if they were being recited by a saw blade descending into steel. Here the effect greater resembles mental anguish as if one was forced to say, “Yes!” to an incomprehensibly vast and hostile existence. Frozen to Death distinguishes itself from its inspirations in this way.

A compositional strength Frozen to Death shares with hardcore punk is in its balance between moments of motion versus moments of oppressive stillness. This contrast conveys sensations of hesitation under the paralytic spell of dread before surges of adrenaline propel the body away from its pursuer down an ever-narrowing line of sight which swells with converging irrational imagery.

The slower doom infected sections make adequate use of space, allowing tonal nuances propelled by sustain to flourish and fill the open landscape. Shearing motifs comprise the bulk of the faster sections while staccato variations of those motifs define the middle paces. This technique is applied in the inverse as well which is at its most effective when serving as a crescendo. Sparse drum work provides a ground to this work using a pointed but potent minimalism. Impassioned vocalization strictly occupies the lower registers that is, like the work of Frank Mullen or Craig Pillard, a highly individualized performance.

Frozen to Death is flawed but worth hearing. Looking forward, Innumerable Forms could improve upon the template established on this work as they have done relative to the preceding EP Dark Worship by writing more tuneful and viscerally engaging music. However, its flaws are shared by every death metal release after the initial wave crested, washed ashore, and rolled back out to sea. What is accomplished here instead are ripples of a singular voice subtly raising the water in the distance. This is more than can be said about contemporaries who pay recombinant tribute to the past.