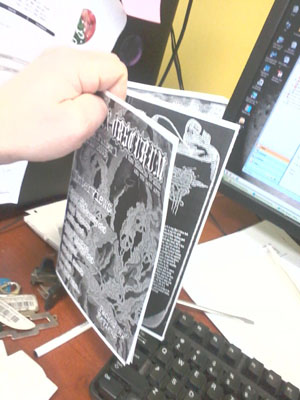 Since the introduction of Codex Obscurum, a new printed zine of the style common from 1980s-2000s, interest has risen in this ancient but effective form of metal journalism.

After the punks (and really, convergence of technological ripeness) introduced D.I.Y. record labels, fanzines and shows, the 1980s brought us some of the first fanzines which were generally xeroxed paste-ups of hand-drawn illustrations and typed text. What made them great was the content: new bands no one had heard of, described in detail, and interviews with the bands people wanted to know more about. They were news and quality control in one.

With the dawn of the internet age, zines seemed destined for an early death. But as publishing information got easier, the quality of the information decreased because people were posting just about anything and the audience treated it all as having that standard. In the current day and age, a zine suggests an edited, deliberate and thoughtful publication, and it has more cachet than a blog or Facebook post.

We were fortunate locate Codex Obscurum editor Andrew Bastard and get in a few questions about the latest old school zine to hit metal:

What did you like about classic xeroxed zines, and what advantages do you think they have over glossy magazines?

I’m not going to sit here and say I don’t like glossy magazines; I had a subcription to Metal Maniacs from approximately 1995-2001. I still have boxes of them somewhere and love to flip through them on the shitter. I also have a bunch of old xerox zines in a three-ring binder that I still read to this day. There is some magic behind a xerox zine though that glossy color zines just lack…the fact that you know someone sat there and put the zine together by hand, a true labor of love.

Has the internet changed how music is sold, listened to and discovered? How does this affect classic-style zines like Codex Obscurum?

Absolutely. Music almost isn’t sold any more aside from vinyl collectors and hardcore music owners. I can’t remember the last time I bought a CD online; I’ll buy from distros at shows/fests here and there but for the most part, I’m in the business of discovering older demo bands that you can’t purchase anymore so I download 80-90% of what I listen to these days. A lot of those blog sites are down these days too so even that has become difficult.

On the flip side, the internet has made listening to new music so easy. Full albums are up on YouTube, along with sites like Bandcamp and Spotify. The net’s been an awesome resource for new bands to get heard.

What inspired you to take on this somewhat anachronistic format, and what advantages do you think it offers over other formats?

I’ve wanted to do this for years ever since I first started working at a Kinkos while in college; I had the resources to do it cheap; I just needed the time to make it actually happen and I guess I finally found that time. I’ve always loved the old style of doing shit, being it releasing demos on cassette, tape trading, zines etc. so this was only natural. This is my way of contributing to the scene while at the same time keeping the old school fires burning. It’s so easy to tell which n00bs are in this scene to stay and which ones are in a “phase” and will be gone soon: the fakes don’t care about the zine; the true lifers love it and are ordering it via snail mail from all corners of the globe.

What zines influenced you back in the day? Did you also read glossy magazines? Did the two complement each other?

I’m only 30 so I missed out on a lot of the classics that I later obtained through trades, eBay, etc. I always had Metal Maniacs around the house but I also loved to read S.O.D., Unrestrained, etc. and some of the shithead, xerox style zines that inspired Codex Obscurum are Slayer (duh!), Pagan Pages, The Grimoire, Mutilating Process, Worm Gear, Metal Forces, etc. I dont know they they complemented, per se; I just liked reading about bands that I liked and discovering new bands through writers that I shared similar interests with. I gotta give a shout-out to Nathan T. Birk, particularly his Apocalyptic Raids column. He knew how to keep it old school even in the newer glossy mags. 90% of the bands he wrote about that I had never heard of, I’d find myself enjoying not to mention he just had a great writing style.

I don’t even know how to answer this; I will say I hate the popularity of metal these days. It’s the biggest trend going and we’re flooded with mediocre bands copycatting Anthrax with flip brim PBR hats on and cut off blue denim shorts and Vans sneakers that think they are doing the scene a favor when in reality they are just wearing on those of us that have been involved our entire lives. It’s really frustrating but all you can do is bask in the fact that this is, indeed a trend for them and they’ll give up and move on to something else soon enough and this metal pop diva faux show will all end.

How will people get ahold of this zine? Rumor is it that you’re charging very little over postage costs — do you hope to make money on this? What will keep you going forward, pay your writers, etc.?

On the Codex Obscurum Facebook page you’ll find a Big Cartel link to order online. I also accept snail mail cash or money orders; all that info is also in the “about” section of the FB page. $2 an issue covers what it costs for me to print these things, and shipping costs are as low as I can get them. I’m not looking to make a dime on these although I think I will make a little money on the side in the end which will probably go towards stickers or t-shirts or something. None of the contributors get paid; we’re all doing this out of our love of the old school art.

Why do you think metal is important?

Metal is the only form of music, in my opinion, that truly shapes the lives of its fans. You don’t see any other music genre that has such heart felt, loyal followers that leave and breathe and bleed for it like you see in the metal community. I guess that’s what makes it “important” to me: you don’t just listen to metal, you are metal. And metal is you.

What function did print zines serve in the original underground? Do they serve the same function now?

Back in the day (BITD) print zines served a much more legitimate function than they do now. Before we had the internet, zines were how you found new bands and how you learned about said bands and the doctrines that these bands prescribed. BITD you had word of mouth, tape trading, snail mail letters and shows; those were your only means of discovering new bands and learning what those bands were all about.

Nowadays you’ve got the net which makes it so much easier but not nearly as much fun. A zine in this day in age is honestly kind of pointless. I could just take all of the info that I put into Codex Obscurum and post in on my facebook wall, or on a blog or whatever and the readers would get the exact same information, faster and far more conveniently but it all harkens back to keeping the flames of old burning and like I said before, it’s fun.

I love physically holding a zine in my hands, and being able to fold it up and throw it in my back pocket and whip it out whenever I’ve got some down time and read a piece or two and then put it away. That’s why record collecting is so big these days and the advent of these die hard releases where you get all these extra goodies: people like to hold and possess the things they love and always have it on hand somewhere to go back to and reference whenever they like.

Can you tell us about yourself, and your past. What other projects have you had? How did you know/meet your staff? Who are they?

This could take forever but I’ll keep is short and sweet and try not to self promote too much .. I currently play in two bands, the first band basically rips off Motorhead, Discharge, Venom and Celtic Frost; we call that band PanzerBastard. The other band is an old school, shithead black/death metal band called Deathgod Messiah…paint, spikes, bullets and Satan. Total South American ‘fago blasphemy…prior to these two, I played in Horn of Valere, an epic, melodic fantasy based black metal band out of Providence, RI.

I currently live in Boston, MA (Jamaica Plain, represent!). I also have a solo project that I haven’t touched in years called Shayol Ghul, also fantasy based. I’m a huge fantasy sci-fi nerd and I mean that in the truest sense, not just one of these Game of Throne over-nighters (was reading that series in detention in high school in 1996). Look at my book shelf and you’ll see what I mean…

My ‘staff’ are just a bunch of local metalheads that for the most part, I’ve known for years just from being around the scene and going to shows etc. most are involved in their own bands; eventually I’ll probably run a feature in the zine showcasing the contributing members personal bands.

Would you give us a little run-down on issue #1 — what’s in it, how many pages, what type of content, etc.?

The first issue of Codex Obscurum is thirty 8.5″ x 11″ pages, double sided and folded in half, that ends up being 60 readable pages packed with text and pictures. The content is primarily band interviews and reviews but there are a few small personal bits in there; rants on this and that and a big written piece remembering Rozz Williams (Christian Death) because the zine came out the day of his suicide (April 1st). This issue has interviews with Hellbastard, Varg Vikernes, Steve Zing (Danzig/Samhain), Vasaeleth, Guttural Secrete, Skepticism, High Spirits and a few more.

Any plans yet for issue #2? Is Codex Obscurum going to be a “regular thing”?

Issue #2 is already underway. We had so much material for issue #1 that it didn’t all fit so we’ve already got a headstart on #2. It should be out in June, maybe July. I’m shooting for a new issue every 2-3 months. I’m going to keep doing it for as long as I can and for as long as my ‘staff’ remain enthusiastic about doing it! and of course for as long as the readers continue to read the damn thing — no readers = no zine so please support us! Thank you.