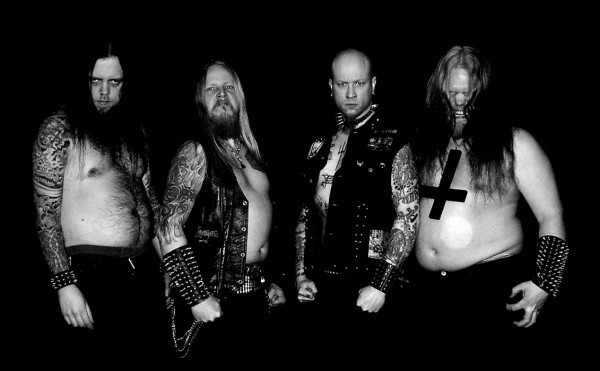 As Wan is trying to break in to the post-modern metal scene, where outside genres often get disguised as metal for the sake of riding the coattails of black metal’s 1990s notoriety, they are emphasizing their metal nature and associating with black metal.

We were fortunate to be able to catch a few words with Wan, who write to us from the darkened winter wilderness of Sweden.

When did Wan form, and what influenced you at the time?

As the song “Day of Reckoning” suggests, we formed in July 2009 with the aim to celebrate the oldschool metal scene. The influences are as obvious as they are filthy. Bands like Venom, Bathory, Celtic Frost have a deep impact in our minds and in our tunes.

Are the members of Wan metalheads of long standing, or is this a recent discovery?

We are four old bastards who have been breathing, eating and crapping metal for ages!

What other types of music do you or have you in the past listened to?

Some of us emerged from the early punk I guess. Personally I enjoyed different types of music as a youngster. Depeche Mode was a band that I liked a lot, and I still think some of their earlier stuff is great.

Coming from Sweden, which is a tiny country from which many important metal bands come, it seems it might be difficult to get known, like the bar is higher. How do you hope to overcome this?

As you say, there’s a lot of quality bands hailing from our dark regions. To be honest there’s even more shitty bands as well that, in my opinion, never should have been! So yeah, there’s quite a competition in the scene, but we’re not going to do anything other than to let our music speak for itself. Some people will enjoy our filth, some will be ignorant bastards.

Were the members of Wan active in other bands or artistic activities before Wan? Can you tell us about these?

We have all been in numerous bands and acts throughout the years. The list would be long and bore your readers out of their minds! It has been various styles anyway, but always metal or dark music in one way or another. Also at the present time we keep ourselves busy by playing in other bands. Not gonna ramble any names though… If you’re interested you’ll find out.

This is an awkward question, but I must ask: why do you classify Enjoy the Filth as black metal when it sounds more like late-period hardcore? Do you know of any other black metal releases that sound
like this, and how do you separate them from hardcore bands like Driller Killer, Disfear, etc?

Hmm… we obviously don’t share the same musical references. There’s a lot of punk influences within our music, but all in all I’d say that we sound a whole lot like Venom, classic Bathory and Darkthrone. Rock ‘n’ roll blackmetal that fuck bands like those you mention in the ass!

Enjoy the Filth inspired me because it seems very deliberate; there are no random riffs or bits out of place. How do you write songs, and what’s your “quality control” process?

The songwriting is more like a beerswinging metal process. We just meet up and create our songs more or less spontaneously. This is who we are and the kind of filth we have inside of us, so it comes rather naturally.

How does Enjoy the Filth differ from your earlier release, Wolves of the North?

It differs in the sense of production and that the drum-machine thankfully got a knee in the crotch, and Dimman did one hell of a job! Music and lyricwise it don’t alter that much.

Do you think as a practical matter that a black metal scene still exists, or has it been absorbed by other forms of music?

The underground scene as it once was doesn’t exist today. Still there’s a big metal scene in Sweden even if the focus lies elsewhere these days. The genuine music and minds involved will never be absorbed or replaced by any other forms, and will forever stand strong!

What’s next for Wan? Will you tour on Enjoy the Filth, and/or write more music?

We sure hope and aim to go out on some live performances. A few organizers has showed interest. And perhaps we’ll get together and spit out some new material in the inspiration of the approaching dark cold winter.

If someone wanted to understand Wan, what bands and albums would you recommend they understand first?

Early Venom, Bathory, Hellhammer, Celtic Frost as mentioned before. If you would prefer some more “up to date” bands, I’d recommend you to torture your ears with acts like Aura Noir and Styggelse.