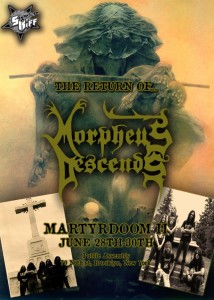 3 thoughts on “Morpheus Descends to return at Martyrdoom Festival”