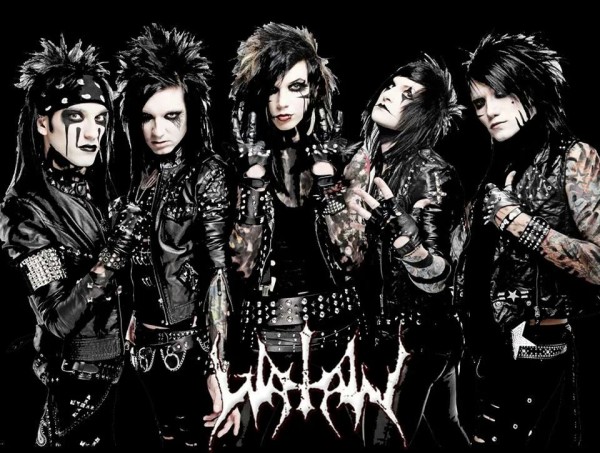 What are Sadistic Metal Reviews? We think heavy metal has artistic value. Advertisers want heavy metal to be the token rebellion of future generations of consumers. We have truth and cruelty on our side, but they’ve got the money. Read between the screams for the rare non-failures… 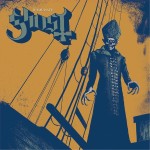 Ghost – If You Have Ghost

Stop. When you hear the name Ghost (or Ghost B.C., since they got sued for unoriginality) don’t think “metal band.” Think hipster product. Ghost create yet another social status pandering musical widget for frappuccino enthusiasts to feel superior to the rest of us. If you go look at your local independent coffee haven, they are there raising their left fists above their foreheads whilst tilting a pinky finger outward and staring down their noses at the rest of us who aren’t as pop-culture savvy as their enlightened Adult Swim-watching kind are. Ghost added a Roky Erickson cover to have “street cred” amongst the garage/psych-rock crowd that hipsters associate with (because it’s rock music, but different…), but then play a series of pop songs from ABBA, Army of Lovers, and Depeche Mode to feign a sense of “open minded-ness” which reveals the true money-grubbing ways that motivate the constant churn of vapid media products. Sure to be a talking point amongst latte experts, this EP culminates in a live take of an original song which sounds like a bad excuse for carnival music. 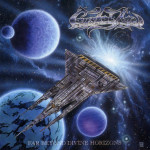 With their seasoned membership which includes former Liers in Wait personnel, a Necrolord cover and an overblown concept, this “seems” like a death metal gem, but it isn’t. Coming off like Liers in Wait after hearing too much Yngwie Malmsteen and Nocturnus’ Thresholds, Crystal Age play an unfocused form of late 80s Forbidden style melodic speed metal with “extreme” updates in the form of raspy vocals, Egyptian themed tremolo riffs, and blast beats aplenty. Considering the scatter brained riff salad nature of these songs, it’s a surprise these guys would even have the aptitude for writing commercially viable AOR power metal later on in Hammerfall. Nothing too offensive, but at the same time random and uninspiring, this band could best be described as “spectacularly mundane.” 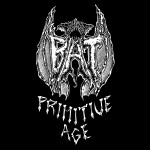 This is a NWOBHM with the rhythms of an American punk band playing in honky tonks. Riffs are less ornate than most NWOBHM except for the fills which are classic early Iron Maiden and the like. It has a local band vibe and as a high-energy act fits more in a live bar setting than being heard on record. Songs vary between having the punk side win out and the metal side win out. On the whole, it’s above average quality with good energy, and songs that develop in very simple but not inept ways. Why is it here among the sadism, then? I like it, but I wouldn’t want to hear it often. It would be a great local bar band, A+. For listening in the world beyond, it’s not yet ready. Most reviewers won’t tell you this, because most reviewers go through a 2.5′ pile of CDs at three minutes each and like anything that they recognize as being like the other stuff they like. 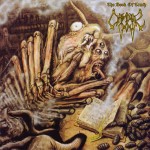 Ceremonial Oath – The Book of Truth

A Tampa death metal influenced project that made compromises to fit in better with the Gothenburg crowd of their scene at the time, Ceremonial Oath manage to wear their influences on their sleeves without living up to the promise of any one single influence, much less the hope that adding them together would make a better teen rebellion sonic product. There are some well developed counterpoint riffs and some of the tracks have interesting structures but, aside from the awesome artwork provided by former At the Gates guitarist Alf Svensson, this doesn’t hold up well over time or when compared to other releases from it’s era. Like a less worthwhile and stadium rock cheese infused Swedish counterpart to Shadows of the Past by Sentenced, but with more rhythm riffs, The Book of Truth is best judged by its cover and recycled early. 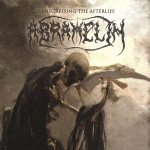 This box set, lovingly released by Century Media on 3 CDs or 5 LPs, is a boon — if you like Abramelin. I am totally divided on this band, since they have many great ideas for song construction, but can’t get over the hurdle of writing obvious and somewhat painfully blunt and directionless riffs, which leaves the end result as a lot of potential left in the hands of implements too crude to realize it. This seems to be a national characteristic of Australian metal which often has great ideas for songs but doesn’t have the technical power of the Americans or the melodic flair of the Europeans that enables it to reach those goals. The production on these restored demos, 7″ records, live tracks and album grooves is amazing and this set does great credit to Abramelin. I just can’t see myself listening to it again. 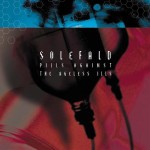 Solefald – Pills Against the Ageless Ills

Let me tell you something about the term “avant-garde”: it works when other people use it to describe you. When you use it to describe yourself, it sounds like an excuse for low quality. Claiming to be “avant-garde”, Solefald play a style of black metal that uses the raspy vocals, thin guitar tone, and fast playing typical of the genre, but nothing else from black metal persists here. Especially not, you know, coherent songwriting, melodic development or atmosphere that isn’t a mile wide and an inch deep. Like Opeth, Solefald use “metal” sections in juxtaposition to “outside” elements in order to create “contrast” which is apparently the opposite of writing a song. This results in a compilation of new wave, rock, and synthpop elements superficially dressed up as black metal, but it’s like a bag of puppies and snakes fighting it, i.e. visible from a mile away as not being in any way unified. Listening to this, one can imagine Ulver, Enslaved, Opeth, and Dimmu Borgir sitting around a conference table and patting each other on the back to see how, like AIDS, their muzak has spread its “influence” which will ensure the ruining of metal beyond them. After us, nothing but pop brain-death, as far as the eye can see… 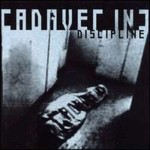 Discipline is not too bad for a late model black metal aesthetic-ized theatre of blasturbation. The problem is the songs are way too similar for their own good and it gets grating, not because of style, but because of monotonously linear songcraft. Considering guitarist Anders Odden’s (playing here under the “Neddo” alias) imaginative and exploratory playing on Cadaver’s In Pains album, Cadaver Inc. seems like a waste of talent as he tries to make a more popular style that is literally too simple for his brain to do well. The music is worthier than Marduk or Dark Funeral, more heavily favoring a grindcore heritage than throwing pop jingles under blasts. Still, this band will perhaps be remembered more for its bringing of underground cynicism and morbidity into the “.com” era in the form of a satirical website than its music. 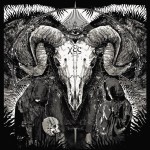 Arvas – Into the Realm of the Occult.

Good riffs, random order. Combine Bathory Blood Fire Death with Ancient The Cainian Chronicle. The result is black metal with a heavy metal feel and while it can build atmosphere, it can’t develop it, thus feels incomplete and deflated like early Satyricon, both in melody and song structure. This is too bad because there are some quality riffs on here, nothing groundbreaking but clearly showing a fair amount of thought. There are also some borrowed riffs which when used too blatantly without being in a new context can crush the atmosphere achieved. Still, the feeling here is that this band has a huge amount of potential but needs an editor to put the riffs in the right order to develop the moods so adroitly evoked. 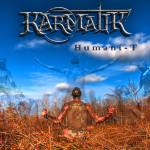 When something gets trendy, like metal, everyone else starts trying to shoehorn their own genre into it. Karmatik is basically a lite progressive band that like guitary riffs, but has nothing in common with metal other than a few moments of speed metal riff before the band gets back to the real business, which is extended space jams. They do a good job of this, although its somewhat personal nature will probably appear a bit cheesy to a metalhead. The hard rock riffs here are, for all that this band likes to be progressive, of extremely well-known types and so there’s not much to listen to there. Like other bands who have become metal when they wanted to be prog, this band shines when they’re doing what they enjoy, which is the space jam parts. This should probably be referred to a prog-rock audience, but their criticism will probably be most severe for the metal parts as well, since they are the weakest link here. 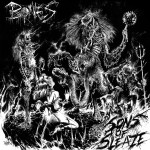 One of these comes along every few years. In the late 1990s, it was Driller Killer. Remember them? ME NEITHER. Bones is late-model grindcore set up to have the energy and listening appeal of a late hardcore band. The embrace of sleaze/perversity is almost always a red flag that a band has zero in terms of ideas about life, thus zero in terms of musical ideas that aren’t based on what another band did. In this case, it’s a crying shame because these guys are good songwriters who can pump out quality (but not groundbreaking) grinding riffs. These songs hold together, have emotional content and are memorable, for the most part. The problem is that like Hollywood stars they don’t connect to anything but themselves. 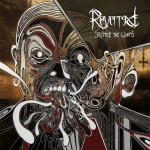 Despite attempts to appear otherwise, this is LA strip styled hair metal re-shaped with modern sludge/metalcore drumming and a few aesthetic touches such as an alt-rock influence in the vocals. However, it’s the hard rock riffs from the late 1970s with just enough groove to slide into the vocals and the decadent simplicity mated with period touches of guitar virtuosity, as if showing a once-vital civilization under the collapsed ruin. It’s not bad but there’s no real reason to listen to it either. I am always repulsed when bands try to disguise their inner nature, and also, when metal bands try to dumb it down to the point of appealing to a rock audience. Just be a damn rock band. And unleash that guitarist. There’s a lot of talent here in mating up these riffs, keeping up with the drums, and making the whole thing work. Unleash some solos, go Van Halen and play more of those epic riffs that sneak in toward the end of the songs. The vocalist is too dominant, as is the giddy slaphappy shuffle drumming, which detracts from any attention span the listener might have had. Then again, if you’re marketing to morons, that’s a good bet.