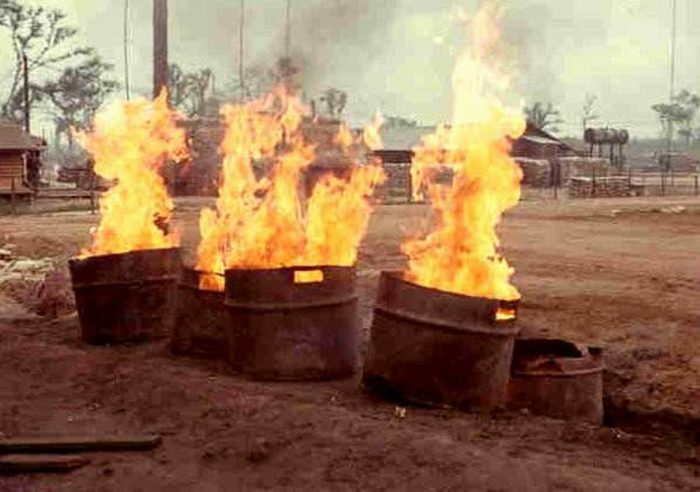 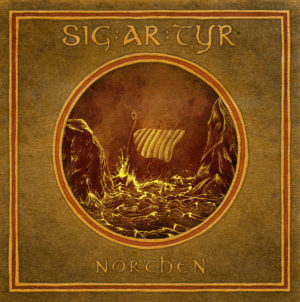 SIG:AR:TYR – Northern (2016)
SIG:AR:TYR : Bathory :: Exhumed : Carcass. SIG:AR:TYR shove in all eras, styles, and sub-genres play by an earlier, more popular group into an incohesive, boring whole. SIG:AR:TYR, like Exhumed, has absolutely zero raison d’être except for the musicians’ own enjoyment imitating their heroes. Northern has the same psychological motivation as children pretending to cook dinner with toy kitchenware. Unlike a child’s make believe spaghetti, SIGL:AR:TYR want us to pretend their album is the real thing and pay them money to physically eat the plastic food. Then we can squirt ketchup directly in our mouths as we eat peanut butter with a spoon! 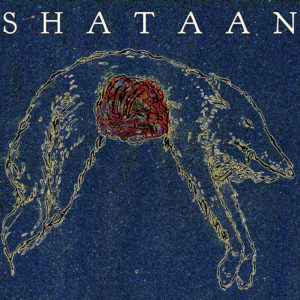 Shataan – Weigh of the Wolf (2016)
The bands comprising the Black Twilight Circle do not actually play black metal: they play black metal influenced, folksy rock music with little regard for riff development in long-form melodic narrative songwriting. Shataan on Weigh of the Wolf thus play black ‘n’ roll. The highlight is not generic metal riffing but the ethnic orchestration with stereotypical composition designed for appeal to the ignorant enamored with multiculturalism. What these naive leftist pussy modern black metal scenesters will never admit is that these rock songs are boring. To the leftists, the fact that short people with olive skin and epicanthal folds are playing mediocre modern rock music somehow actually makes that music worthwhile. The hipsters and scenesters praise it the same way they do a child’s poor drawings. The Black Twilight Circle collaborate in this infantilization of their romanticized pre-Columbian past and ethnic makeup in the same way that natives dress up in grass skirts for tourists in the South Pacific. Shataan – Weigh of the Wolf isn’t metal in the same way that adding green food coloring to Bud Light doesn’t make it into Guinness. 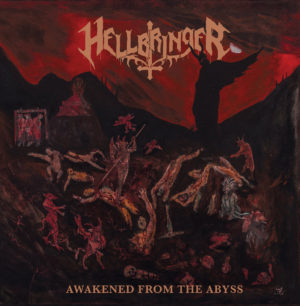 Hellbringer – Awakened from the Abyss (2016)
It’s difficult to be outright bad as this brand of metal is written for you. Hellbringer adopt Slayer cadences with a Merciless style tortured aesthetic. The basic formula is Hell Awaits riffs given flavor by mildly increasing its technical ability. There are moments of uncomfortable plagiarism such as “Coven of Darkness” which shamelessly apes “At Dawn They Sleep“. There isn’t much more that can be said about this release or should be said. Unless one truly desires the lamentations of cynical and apathetic critics whose souls are hollowed out by mountains of this trash they are forced to endure. 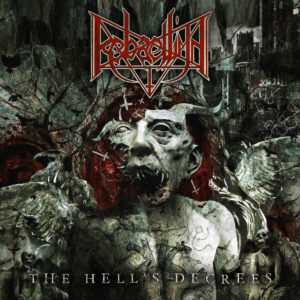 Rebaelliun – The Hell’s Decree (2016)
D-list death metal riffs made into sing along rock music rather than actual metal  isn’t particularly endearing to headbangers. These riffs aren’t particularly noteworthy or memorable at all; they reek of garage guitar wank mixed into an ersatz cargo cult Khyber pass copy of death metal with a computer. Just like a Khyber Pass Lee-Enfield, this will cause limbs to fly off when with real ammo. Zika death ‘n’ roll made by pinheads. 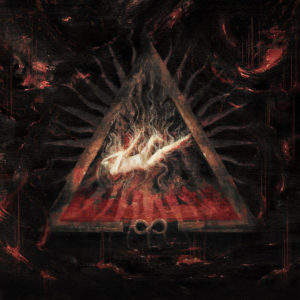 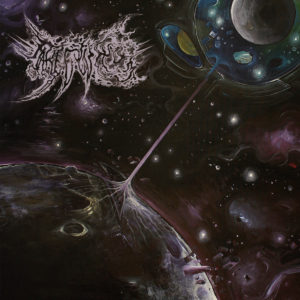 Mare Cognitum – Luminiferous Aether (2016)
Generic atmospheric black metal that attempts to use multitrack recording to approximate classical orchestration. Unfortunately Blessed Are the Sick or The Red in the Sky is Ours this is not; Luiminiferous Aether is comically awful carnival music and I expect a little person to come out and dance around a styrofoam Stonehenge monument at any moment. Where’s the free-form jazz exploration in front of a festive crowd? 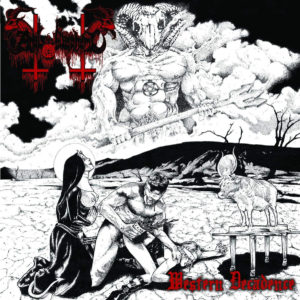 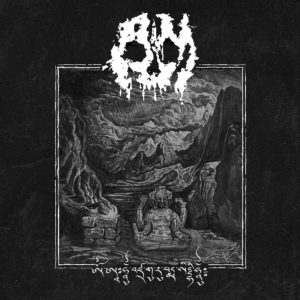 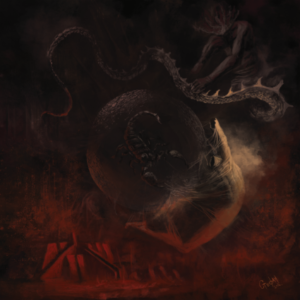 Hoath Codex III: Crown of the Mind (2016)
Diocletian with speed metal triplet chugs amidst the generic “blackened death metal” that is actually just grindcore. Honestly Hoath fits the war metal template of grindcore + crossover thrash very well but alas their music just isn’t very good or memorable except for obvious tributes to past greats like Slayer and Bolt Thrower. This is only for those who cherish multiple copies of War Cult Supremacy and the entire Diocletian discography, id est NWN forum collectors hoping to sell their die hard Ross Bay Cult battleflag for weed money. 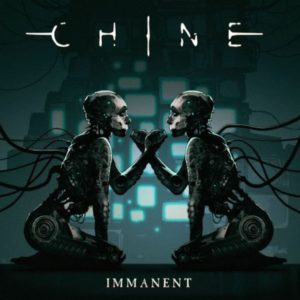 Chine – Immanent (2016)
Crappy teknical deaf metalcore that’s not only random and bad but frequently slow and boring. These guys are about a decade too late to cash in on this crap so why did they even bother making it? Does anyone actually believe this is good? If metal is a milk product, this is a cowpie or a drain fly infestation in your bathtub. Black, maggot-filled sludge oozing up from drain isn’t particularly appetizing. 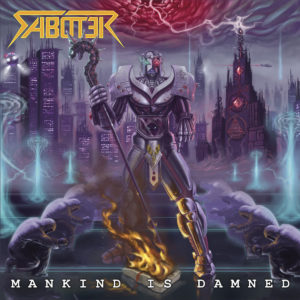 Saboter – Mankind is Damned (2016)
Not totally incomeptent Judas Priest – Painkiller worship. Saboter needs to develop their rhythm riffs and twin guitar harmonies more; half these tracks are boring rock songs relying on the vocals to power through. This is a band who back in 1987 would’ve been told that their demo was not horrible but they need to work on more material to record an album. Now they can just find some idiot on the internet to release their bedroom digital audio workstation created tribute. If you discharge your payload to Metal Church, you might appreciate this for twenty minutes and need to kill yourself before the other prisoners break into the sex offender solitary confinement ward and shank you with a sharpened piece of linoleum. 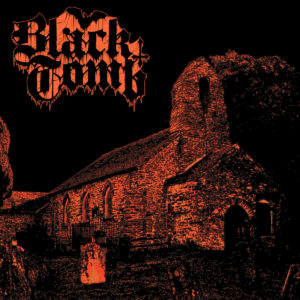 Black Tomb – Black Tomb (2016)
Lame stoner doom in the style of Electric Wizard minus a slightly overweight blond women who becomes vaguely attractive if you’re black out drunk. Nothing stands out here and the cover looks like a still from a ZX Spectrum game. Go back to the garage! 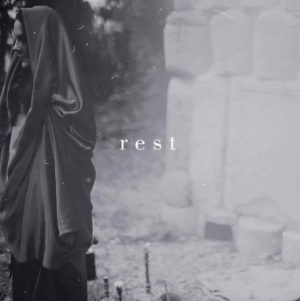 Rest – Rest (2016)
Rest attempt to shoegaze but fails hard by sounding more like Nirvana at their wussiest and whiniest rather than My Bloody Valentine. Occasionally certain songs pluck up with melodies that resemble New Order at times but they quickly recede back into more moping. Rest, you go to the bagel place to get bagels, not to listen to the generic adult contemporary soft rock that 44-year-old, otherwise unemployable skill-less cashier Janice is playing off of Spotify in the background.

Gespenst – Forfald (2016)
The whiniest black metal meets the most boring doom metal imaginable for a flannel-shirted crowd with tattoo arm sleeves and waxed moustaches. This is what Thurston Moore meant when he called modern black metal “music made by pussies.”

Vlad in Tears – Unbroken
Candy bar pop crap masquerading as pop punk metalcore. This is autotuned garbage that sounds like Bruno Mars if he wanted to join Bullet for My Valentine or some other bullshit rather than actual heavy metal.

Faustian Dripfeed – Between This and Death (2016)
Typical Gothernburg and Heartwork influenced metalcore only with growls as the main vocals and the choruses as rasps. Overemotional masturbatory hard rock solos abound and make me hit the delete key.

Shadecrown – Agonia (2016)
More Gothenburg metalcore with a keyboard girl and whine choruses for fat guys and white knights with low testosterone to stroke their micropenises too.

Soulwound – No Peace (2016)
Generic melodeaf that rips off several speed metal bands and sounds like it was plasticized in ProTools.

Shokran – Exodus (2016)
Christian djent metalcore for megachurch attendees. This is what the youth pastor will play for the kid in the Metallica – Load shirt before raping him.

Light of the Morning Star – Cemetary Glow (2016)
More hipster black ‘n’ roll bullshit by some idiot who wants to be in Ghost but isn’t good enough even for that.