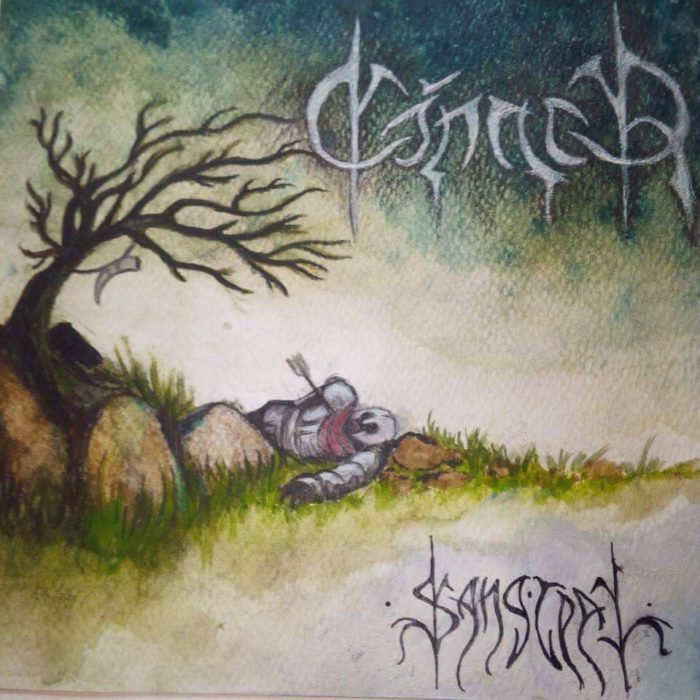 Sangreal breaks away from conventions set by the band itself without losing the singular, underlying personality, although one may perceive a certain alienation that goes beyond the limits that a careful explorer must set to advance on sure footing. Such enthusiasm has its most obvious source in the increasing contribution of material from other band members and the inclusion of a third guitarist. The situation immediately causes the centre of the band to be more diffuse than when there was a single dictatorial and unanimous voice guiding decisions. This effect could already be seen in Duin, where the last two tracks evidently marked a detour from the path that Condor usually treads.

For those of us who had the most optimistic of expectations in Sangreal, a total convergence of past works was expected from a band that seemed to grow towards a clear vision, and from there, its elaboration to define the character of the new album. This evolution should on the third step produce the alchemical sulfur, after having gone through the transition from salt to mercury. The first track in the album, ‘Sangreal’, accomplishes the long-awaited condensation and perfection, making natural use of the sweetly structured sounds to be found in Nadia and then filtering them through the analytical rigour of Duin.

However, the reader will not find here a cheap amalgam that simply encapsulates sections and elements that sound like one of the two previous albums, leaving us with crude juxtapositions. Instead, we see the pure and mature voice of Condor coming into view, reducing previous incursions to words and terms that are now handled with daring eloquence, giving rise to a composition of truly symphonic dimensions and details. ‘Sangreal’, the song, thereby attains its rightful place at the pinnacle of Condor’s legacy as its very own ‘Close to the Edge’.

It is not difficult to imagine the plight in which the young musicians found themselves. Should they proceed to apply the same method to expound the applicability of their newfound voice to its limits? Or, would it be better, perhaps, to dedicate the rest of the album to all their newest ideas, which shewed their romantic and sylvan spirit under different lightings? For better or for worse, it was the second one of these choices which resulted in a package that contains both, the most excellent composition to be brought forth by Condor to date, and the most bizarre material, extraneous to the original voice of the band and indulgent to the point of almost resulting in disaster.

In between these two extremes we find the most unique songs to ever be written by the band, enchanting exemplars that contribute a light freshness which prevents our minds from focusing too much on the most lamentable missteps of Sangreal. Such blessings are ‘Se Extienden Las Sombras’ and ‘Outremer’, which make use of guitar voices in a way that is reminiscent at times of certain light choral arrangements, to later progress melodiously and confidently, in the typical way of Condor in its most dreamy, ardent and determined aspects. This most fortunate of fluxes concludes in a marvelous composition for acoustic guitar and men’s voices titled ‘Sainte Terre’, where we hear the unmistakable South American timbre. ‘Viejo Jabalí’ contrasts a little with its surroundings, and could be said to seem at home in Duin. In fact, this writer will venture to posit that it is in this track that we finally receive the style of that second album in refined and accomplished form.

We finally arrive at the scabrous terrain towards the end of Sangreal. We first encounter ‘El Arbol de la Muerte’, where we see a Condor trying to maintain its own voice while exploring sounds quite alien to itself, giving a sense that this is another band, with a different melodic personality, trying to sound like Condor. This other band uses a voice and rhythm akin to alternative styles of rock, while adopting the mannerisms of Condor. The blow is softened by the overall progressive bent, which justifies this indulgent variety a bit while at the same time burying particulars under rich content. Something similar may be said of the last track, where the most painful moments are seen in its incredibly divergent solo section that culminates in a dissonant solo that is rather too off key. ‘Roncesvales’ is redeemed, almost perhaps, only by its undoubtedly exquisite structuring of the horizontal and vertical.