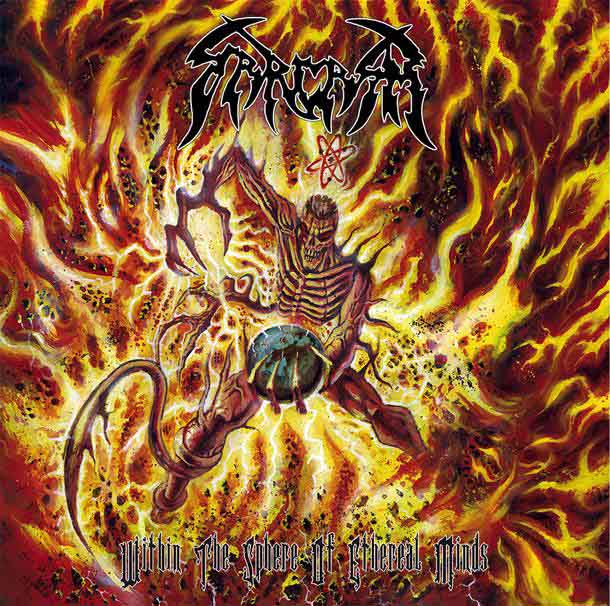 Swedish death/black metal band Sarcasm‘s first LP, Within the Sphere of Ethereal Minds, is coming out in March as announced on their Facebook page. The band’s Burial Dimensions demo compilation was extremely promising but featured too many in-congruent keyboard interludes and too much fat that needed trimming.

Here’s the cover art for the new SARCASM album “Within the Sphere of Ethereal Minds”. The art was done once again by Raul Gonzalez Art, we loved that skeleton dude so much so we used him again (He’s our mascot now, we call him Sarcor) And continues on the back cover with planets and awesome stuff, only those who buy the LP/CD will see it ;) It’s not a concept album but a thematic one (hope you know the difference) and it’s all about cosmos, the power of the mind, laws of the universe, the great vortex, spiritual realms etc. Almost everything written in the “non-physical’s point of view” (absolutely not religious, on the contrary lol) A philosophical and interesting journey through mind indeed. As you probably know, the lyrics of this band are as important as the music, and we don’t just do some lyrics about zombies and stuff, which is also cool but not for us. The music is like the first album very melodic, in many ways faster and a bit shorter songs. The album will be released in march on Dark Descent Records One of the songs can be heard very soon. And a music video etc etc. Just stay tuned.. Cheers!

Within the Sphere of Ethereal Minds:

Side 1:
Bloodsoaked Sunrise
From the Crimson Fog They Emerged
Embodiment of Source
Scars of a Land Forgotten

Side 2:
In the Grip of Awakening Times
Silent Waves Summoned Your Inner Being
A Black Veil for Earth
The Drowning Light at the Edge of the Dawn