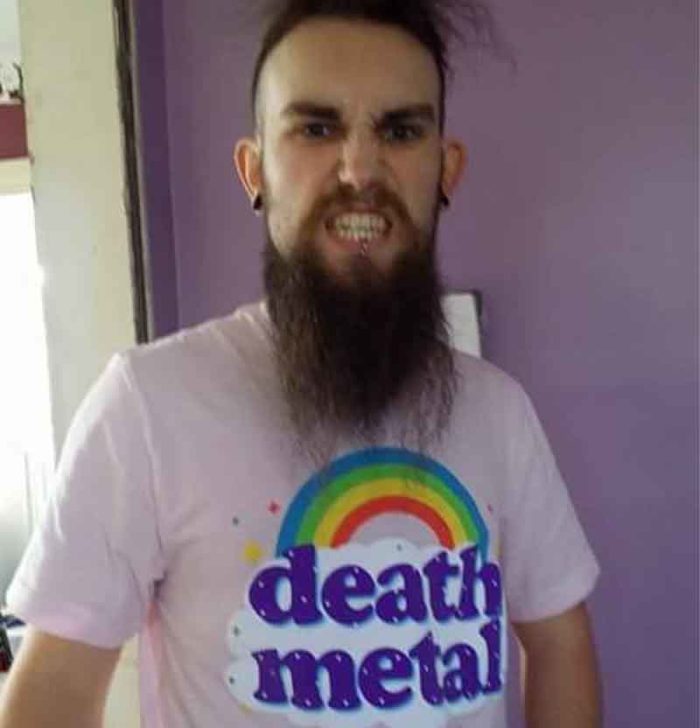 As predicted here, the takeover of underground metal by late hardcore tinged substitutes has failed. This music, which we might call “soymetal” because it appeals more to the emo hardcore audience than the feral and realistic traditional metal one, took over because after the underground fizzled in the hands of NWN/FMP impersonators, labels found a new audience in whiny millennial SJWs.

Metal rages like a tempest or a force of nature. It has no morality, nor believes in any universal truth, communication, or values. People are different and therefore, their goals, abilities, and understandings are different. There is no way to make everything right and peaceful.

Soy metal on the other hand is pacifistic. It wants to eliminate differences between people and lift up the failing (“empathy”). It offers a vision of universal human brotherhood, where we are all the same except for the cool lifestyle accessories, blue hair, and novelty music we like.

Consequently the two musics sound different. Metal is structured, complex, and not very “human”; it sounds like roaring fires, tornadoes, wars, demons, predators, and horror. Soy metal is simple in structure but has lots of surface variation and sounds very human, if that human is sitting in his bedroom, feeling sorry about himself, and posting foodie pictures to Facebook.

These two worlds could not overlap, so instead, the for-profit labels and magazines — who were not very relevant during the underground metal years — paired up with the fans who were essentially losers at life and replaced metal with hardcore.

They mixed in a few metal riffs and tropes to make it seem real, at first, but over time, they started moving closer to the same stuff they always sell: verse-chorus structures, jazz influences, indie rock aesthetics, and a mournful self-pitying sound paired with righteous indignation.

It was basically 1960s protest music reworked. The audience for this is always larger than metal, so as we warned years ago, rock was going to absorb metal and replace it except on the surface, where it could pretend to be metal like the soundtracks for Hollywood movies about car races and motorcycles.

Over the last few years however, interest in soymetal has waned. Mostly this happened because soymetal produced nothing truly great, just a constant stream of stuff that record labels and hipsters would tell you was “the best thing ever” but was then forgotten six months later.

A number of other trends converged, making the demise of soymetal likely. The first was the return of CDs and vinyl at the forefront of the music industry:

Streaming music is taking over the recording industry, and there’s no clearer sign of it than this: digital download sales have fallen so much in the past few years that they’re now smaller than sales of CDs, vinyl, and other physical media, which hasn’t been the case since 2011.

The stats, which come from the RIAA’s newly released 2017 year end report, show that digital downloads fell to $1.3 billion last year, whereas physical media, while also falling, only declined to $1.5 billion.

This requires some unpacking. Streaming has essentially replaced radio and therefore, targets a different audience than album sales; this has always been the case, in that there were always more radio listeners than album listeners.

However, with CDs and vinyl replacing digital downloads, a shift has occurred. The two audiences are separating. People who want some new pop every week to sing along to have again become a separate audience, and people who really like music and judge it by quality are buying albums.

We have to view this as the start of a long process. The mainstream audience has gone with streaming; all of the niche genres, however, are selling albums. This means that for anything but the big pop bands, a focus on albums and quality is rising while the disposable digital album is fading.

This trend can be seen in the recent top-charting Judas Priest album Firepower, which broke records for the band, especially in physical sales:

“Firepower” moved 49,000 equivalent album units in first week of release. Of that sum, 48,000 were in traditional album sales, just shy of the 54,000 copies sold by “Angel Of Retribution” in that album’s first week. The “Firepower” chart position was bolstered by sales generated from a concert ticket/album sale redemption offer in association with the band’s current North American tour.

…As previously reported, “Firepower” landed at position No. 5 on the U.K. album chart. It marks the band’s highest ranking, and first time in the Top 10, since “British Steel” reached No. 4 in 1980. Elsewhere, “Firepower” has also become PRIEST’s first-ever No. 1 in Sweden.

This shows how the niche audiences are moving toward physical copies. Even more, it shows strong interest in traditional metal or “true metal,” mainly because that audience has never gone away, but was temporarily overshadowed by a surge of hardcore kids in the largest recent generation, the Millennials.

Possibly as a response to that, record labels are taking greater notice of traditional metal. Metal Blade just signed NWOBHM band Satan, who make music in the same style as Judas Priest with arguably even more aggression:

While standard bearers of the NWOBHM movement and responsible for ’83’s seminal “Court In the Act” and ’87’s “Suspended Sentence”, with their upcoming album, SATAN make it abundantly clear that in 2018 they are not interested in simply capitalizing on past glories. Comprised of 10 tracks of searing metal, it is blatantly and profoundly the work of the Newcastle upon Tyne natives at their very best, infusing their signature sound with a more raw, wild and spontaneous vibe than they showcased on 2015’s mighty “Atom By Atom”, in the process displaying more passion and energy than slews of bands half their age.

What do audiences want? True metal. They want it aggressive and loud, evil and amoral, nihilistic and masculine. They want it to show up on an album with cool cover artwork, gritty production, and a chain of church ladies and limousine liberals running after it screaming about how “problematic” it is. They want the metal experience that only true metal can deliver.

Contrast this to the twee and trivial nature of soy metal, which if FMP/NWN were standard bearers for boring three-note war metal, is helmed by the MetalSucks empire and their Blast Beat Network, a company that sells advertising on its sites MetalSucks, CvltNation, Metal Injection, Lambgoat, Metal Insider, Heavy Blog Is Heavy, The PRP, Gear Gods, and The Hard Times. All of these extensively feature soy metal and ignore traditional metal whenever they can.

Criticism of this soy metal empire has been building of late because of the politics and social attitudes of these sites, which essentially exemplify anti-metal attitudes. Soy metal is not metal, and those who like and promote soy metal want to destroy what makes metal, metal.

Blast Beat claims that it reaches the “youth” population:

Are they the new big labels? Or simply the new indie labels, reminiscent of how alternative rock had its own set of labels who quickly began to behave just like the big labels? Either way, this group is driven by money alone, and they want to get it from a big audience of soyboys not lone metalheads, mainly because metalheads tend to buy fewer of the nonsense “lifestyle products” that advertisers enjoy.

This is not to say that these sites do not do a good job, or that they are bad people, only that they are reaching for a different audience, as demonstrated by hipster ironic names like “Metal Sucks” and “Lamb Goat.” Metal has always detested hipsters however and viewed them as a variant of poseur.

As we have seen before, however, numbers do not tell the full story. Many listeners are not represented online at all, and many of the online figures are distorted by a small audience. 8% of internet users generate 85% of ad clicks:

The updated results based on March 2009 comScore data, and presented by comScore chairman Gian Fulgoni and Kim McCarthy, manager, Research & Analytics at Starcom, at the iMedia Brand Summit in San Diego on September 14, 2009, indicated that the number of people who click on display ads in a month has fallen from 32 percent of Internet users in July 2007 to only 16 percent in March 2009, with an even smaller core of people (representing 8 percent of the Internet user base) accounting for the vast majority (85 percent) of all clicks.

This means that we see online is a very small group being over-represented, mainly because they have the time and are interested in clicking on ads, while a much larger majority is pushed into statistical irrelevance. In the 15% that is not seen, most of the real action happens.

Recent album sales show this happening: people are dropping out of the internet mainstream, and going back to what works, which is not soy metal but true metal, because only true metal delivers the heavy metal experience. As the false dies, the true rises.