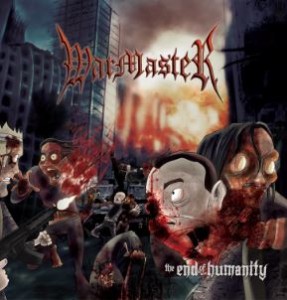 The End of Humanity begins with one of the few Discharge-inspired apocalypse intros that are worth hearing and suggests to me a long lineage in grind. What follows is death metal in the American style with influences from Terrorizer and Blood.

Since they’re Dutch, and will get compared to Dutch bands anyway, it is worth mentioning that there is a passing similarity to the first album from Sinister, perhaps infused with something that uses a bit more rhythmic fluidity as opposed to internal conflict, more like an American heavy death metal band like Malevolent Creation.

Thick luscious vocals growl alongside the beat, injecting something almost like groove except for its offsetting contrast to the mood. Riffs, while bludgeoning streams of power chords, show a high degree of internal tempo change that gives them texture, and occasional melody. This marches forward on functional drumming that knows when to stay out of the limelight and accent guitars to build a greater surge of mood.

Allusions to Blood dot the album, from the abrupt tempo changes to the rhythmic position of vocals in respect to the snare. However, there’s a whole host of other allusions too from the classic death metal world, but none are lifts. They are similar ideas, applied in new ways.

While The End of Humanity tapers off into songs that are slightly more experimental and more sparse and drawn out, the intense roiling wave of power from the first half carries through and makes the whole an enjoyable experience. Like the bands it honors with its style, Warmaster is going its own way, driven by its own quest, and the result exceeds what any emulation could achieve.

4 thoughts on “Warmaster – The End of Humanity”