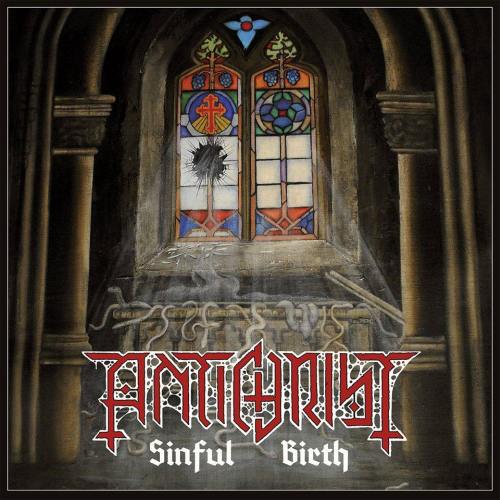 Sinful Birth is therefore safe space metal for hipsters too afraid that Morbid Angel, Darkthrone, and Burzum “are racist” and that they will go to the politically-correct, liberally yuppie hell of being 86ed from the shitty hipster “not really a dive bar” bar where all the employees sport facial piercings, lesbian haircuts regardless of sex, and tattoos of cartoon characters. Such bars host local scenester punk shows, funderground metalcore and pride parade drag fundraisers on off nights. The funderground fears being banned from shitty hipster bars as much as Catholic school boys fear going to hell for telling the police that the priests are fiddling them.

Antichrist are clearly schooled in the music and mannerisms of the old popular speed metal bands such as Metallica, Megadeth, Slayer, Dark Angel, Sodom, and Artillery. Almost every song on Sinful Birth is themed around a riff or lead used better by more talented musicians in the 80s, including of copying the overused motif from Holst’s “Mars, Bringer of War” which has been used by everyone from John Williams (Star Wars), to Diamond Head (“Am I Evil?“), to Nile (“Ramses, Bringer of War”). Antichrist ride out these rehashed riffs in a repetitive riff salad speed metal format similar to Kreator. This lack of effective metal composition on most of the tracks on the album shows that the band are merely posers.

Unlike Ripper, Antichrist have developed no true style of their own. Sinful Birth is merely a pastiche of metal’s past simplified down into mosh, core, fun, and trends. The band can certainly play their instruments but musicianship is no excuse for such poor arrangements. Speed metal die hards looking for work from this millennium would do better to seek out the aforementioned Ripper’s Experiment of Existence, Sammath‘s Verwoesting Devastation, or Fourth Monarchy‘s Amphilochia for quality modern metal influenced by the triplet thrashers of the past. Antichrist are aping the success of the past like nude tribesmen kowtowing before a wooden idol of an airplane in the hope that the white gods will cast cans of Spam from the heavens. It’s about time to torch the cargo cultists.