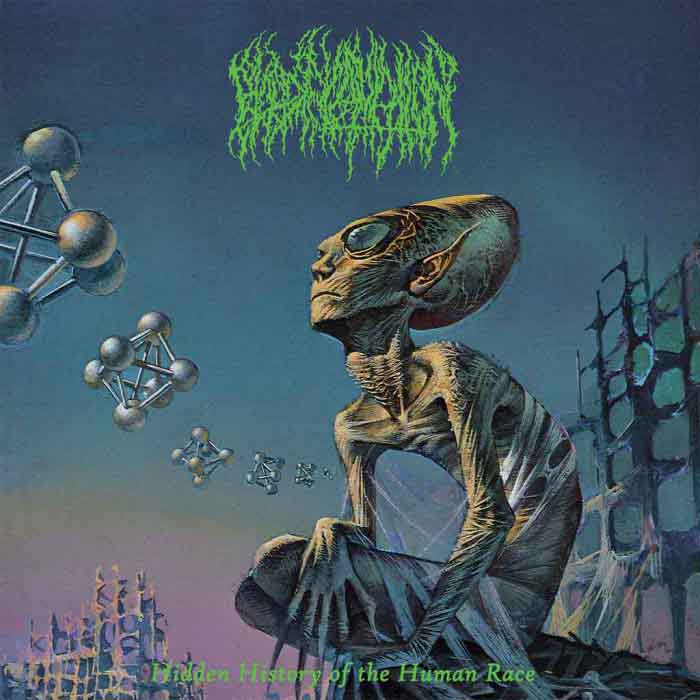 There is far too much meandering here as the songs drift into bizarre passages that are either taken from basic Arabic melodies or completely plagiarized from Timeghoul’s short discography. The final third of stupidly titled “Awakening from the Dream of Existence to the Multidimensional Nature of Our Reality (Mirror of the Soul)” is a complete waste of time consisting of never ending solos, atmospheric passages and overlong acoustic guitar passage. Overall that is six minutes of fluff into an eighteen minute riff salad. “Inner Paths” which is ambient fluff and consists of a motif taken from Timeghoul’s “Occurrence on Mimas” while repeated for four minutes. Eventually another Timeghoul riff appears but it’s too late to undo the harm done. “The Giza Power Plant” contains a four minute hilariously cheesy arabic melody that is fit for a cheap airline commercial before doing the inevitable and playing another Timeghoul riff. Over half this album is riffless filler while the other half is Timeghoul worship.

The only fillerless song here is “Slave Species of the Gods” which surprisingly steals Timeghoul’s “The Siege”. All the songs are also held back by their riff salad arrangements that go all over the place and have no narrative intentions as there is no discernible development, climax nor conclusion within these songs that are held together by their recognizable riffs. Though at times the band reintroduce melodies with mutating motifs, they bring nothing to the songs as when the band is not stuck on static ambient mode, riffs come and go without much logic as if an algorithm assembled different Timeghoul riffs into a song. Vocals are pathetically weak with Antti Boman performing the only decent growl on the whole album. The Demilich and Incantation influences have disappeared as the band can now fully ape one of the hardest bands to copy in Death metal. Avoid at all costs and listen to both Timeghoul demos.