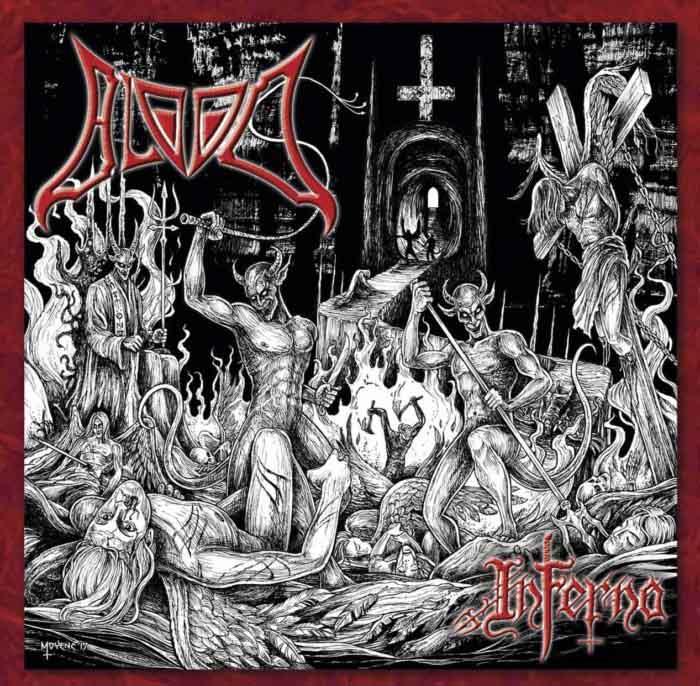 Continuing the path of a storied band, Inferno mixes re-recorded versions of older tracks with new material in what seems to be a band redefining itself. Blood started as a grindcore band with more of a death metal attitude, then adopted an outlook closer to black metal for its opus O Agios Pethane, but since then has struggled by being caught in the middle of three genres.

Part of the reason for this suspension derives from the nature of grindcore itself, which reached its peak with the relatively non-political work of bands like Carcass and Bolt Thrower, but then was recaptured by Napalm Death, who following their idols in hardcore including Siege, wanted to make it a forum for political statements, and these statements — which were very similar to what we heard from the EU and US at the time — struck metalheads and older punks as too conformist and untrustworthy.

However, these rewarmed hardcore bands dominated what most people thought of as archetypal grindcore, which left Blood stranded in a political genre writing songs which kept the mythological focus that bands like Slayer and Possessed. While Napalm Death slowly brought more death metal elements into its music in the early to middle 1990s, grindcore all but evaporated as a distinct genre under the massive popularity of Napalm Death, who were not only big in America and the UK but also the wider third world, causing labels to get excited by the prospect of global profit from bands who were preaching straight Communism. The irony did not dent sales.

Although this is an unpopular opinion, Napalm Death reached their peak and most listenable music with Fear, Emptiness, Despair in which they merged their new deathmetal-grindcore hybrid with more melodic influences and dramatic pacing that took the standoffish riot vibe of bands like Pantera, Exhorder, and Prong, and spaced it out, making it seem more grandiloquent and thus uniting it with the emotions expressed in melody.

Blood takes a similar approach here. Instrumentation uses a sparse precision to bring out the dominant rhythms in each song and inflect them with subtleties where possible. This becomes necessary in older songs where once sprawling, loosely-timed guitar riffs are now exact and unyielding. This duality presented the primary challenge to Blood in integrating older material with new.

The newer material, very much in the style of 2003 album Dysangelium, uses rigid riffs in bounding rhythms to create a contrast of inertia and inner struggle, which comes forth as those subtle inflections become foreshadowing for the collision of themes later in the song. These songs cleave more deliberately to consistent principles of construction, which eliminates some of the serendipitous discoveries of Impulse to Destroy but delivers a clearer vision.

Older songs take on a new life as a result, rising from the chaos of grindcore to become more focused compositions like those from Metallica through Morbid Angel, and the morbid darkness of the black metal influence has receded to take place mostly in vocal delivery. The result is more powerful, although sometimes the idiosyncrasies of the past made songs more distinctive.

Inferno shows a band attempting to encompass all of what it has done over nearly thirty years into a style for a new age where metaphor must not simply gesture, but express, a musical and artistic clarity. Simultaneously, the music displays a more militant and technological clarity, which makes it more directly threatening.

To a listener not steeped in Blood and its history, these songs flow together smoothly, which shows the triumph of this approach. Savage vocals, ragged but articulate riffs, and a powerful sense of chorus — more like Sodom on Persecution Mania — dominate this album and give Blood new strength and vitality. It is glorious to see such a storied band coming back with such a strong future outlook.