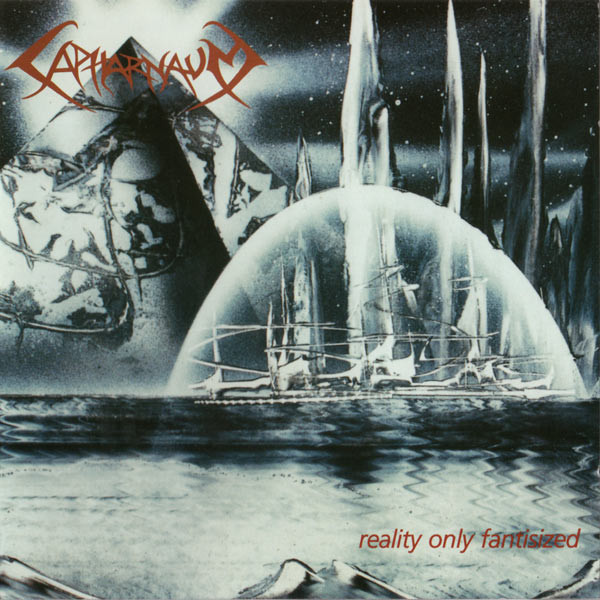 Capharnaum were a short-lived “tech-death” band hailing from Connecticut but then after the release moved to Florida in the dying of the Floridian movement in an attempt to gain recognition for what is a technical Death metal album that genuinely has musical quality beyond mere feats of virtuosity. Influences range from bands like Monstrosity, Death and Iron Maiden with various Jazz techniques inserted. Though this formula has led to an infinitely long list of terrible tech Death bands, Capharnaum avoid these shortcomings by implementing these techniques within a genuine Death metal context and a true passion for genre not halted by technical acumen.

Like Sabbat’s (UK) Andy Sneap, Jason Suecof would make a career of producing terrible bands with a plastic pristine sound that is conform to industry requirements. Like Sabbat’s albums this ironically does not have the sound associated with this genre rather relying on loud powerful guitars that are gluttonous with the aural space and let the other instruments fight for what is left. The vocals manage to come through clearly with the drums sounding muffled and the bass forcing itself into what space is left. Though the guitars can be overbearing this production choice certainly works as though there is a balance that favors one instrument over the rest, they do manage to push the music through adeptly in an uneven yet functional partnership.

Capharnaum express their ideas with a large palette of techniques that is held together through repetition and short running times. The band knowing how tiring this music can be choose to keep the total running time at twenty-five minutes with each track staying within the three minute range. The note selection takes mainly from Death and Iron Maiden with various forays into extended passages harmonized in thirds and the harmonic minor scale or what can be called the Schuldiner scale which refuses to let the melody end on the root note adding a more pensive quality as finality is never accorded to the melody. The band arrange with a lot of the more frantic techniques developed by Deicide on their initial outings which consists of taking speed metal riffs and increasing the intensity to almost unbearable limits through the addition of Death metal technique and pushing the whole to its logical limit. Synths offer a backing role but, on the track, “Night Terror” emulates a flute while playing a simple oriental solo. The drums occupy each empty space with long fills that build the tension before taking a supporting role and obeying the whims of the riffs. The bass sticks to the rhythm guitars but diverges during certain leads or harmonized parts. Though the talent is visible in each member none of them attempt to steal the spotlight from and only diverge when there is enough musical space for each of them to be heard and quickly go back to their primary objective of leading the compositions forward through their labyrinthine arrangements. Vocals are much more genuine then what the successors would have to offer. Natural deep growls in the vein of Corpsegrinder circa Imperial Doom. That are at the best when pushed out emotively during the climax of a song like on the ending of “Drawn-in Misery.”

Arrangements loosely follow the Death metal narrative but are guided more by feeling as a jazz band would, in that the flow of the song tends to not follow a narrative as much as it expresses a certain emotion or a particular state of mind as evidenced by the lyrics. The band tend to allow rhythmic one note riffs to take center place far too easily and thus devolving the song back to its speed metal roots and halting all momentum which especially on the track “Delusional Imprisonment” which has a dichotomic effect of creating two seemingly different songs with similar themes. On each track there are multiple motifs that do not change or progress but are used frequently to stop the album from falling into riff salad territory. The lack of mutation of these motifs really does halt the potential of this record as we never get to see a melody changing or being deconstructed which is the basis of narrative music like Death metal but the Suecof brothers and company manage to save this through some very good motifs. Songs manage to transition momentum fluidly between these motifs, never leaving the whole feeling fragmented as is often far too common with this genre. At times the band leads us through some truly powerful awe-inspiring moments that express grandeur, at others it falls into the traps of the band’s main influence Death.

A genuinely excellent piece of Death metal that deserve a minor place in the Pantheon and that defies the word technical Death metal showing that proficiency with an instrument can give the upper hand when combined with the right set of minds. Though Capharnaum would die out shortly after this record only to be reformed into some idiotic metalcore with some of the worst growled vocals in the history of music courtesy of Trivium’s Matt Heafy. Capharnaum show an alternative path taken by mainstream darling Necrophagist and Obscura that may not be as financially lucrative but on the whole is a superior work of art.