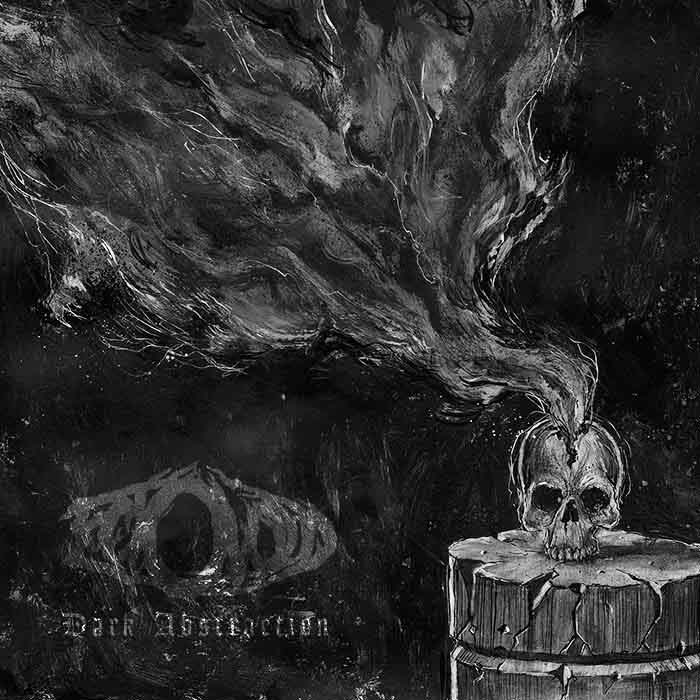 In this age of musical saturation, noteworthy releases slip through the cracks as mediocrity bombards the average Death metal listener who prefers to remain within the well-defined boundaries of the classics of the genre. Some bands distinguish themselves the horde and create compelling works that while not classics are sincere and well-crafted pieces of music that deserve attention and that merit multiple listens. Very rarely do we see works of art crafted within this genre that can be compared on equal footing to the greats of the past in creating their own unique voice. Here at Death Metal Underground we have entered Sammath and Serpent Ascending into that category. Today we open the gates for Ectovoid and their release Dark Abstraction (2015).

Formed in Birmingham, Alabama in 2010, Ectovoid show very little American Death metal influence rather relying on a base of Demilich, Asphyx and Voivod. Though completely free from any of the tropes associated with modern metal, Ectovoid do not seem content to play “OSDM” for the sake of “OSDM” but to express their thoughts within a diverse musical language on themes regarding nothingness and the human interpretation of it.

Each instrument occupies a tremendous amount of space in the mix yet everything can be found at any moment during any track. The guitars take center stage with a deep buzzsaw tone that maintains the necessary high end to pierce through the mix and to make sure that each note can be properly articulated within a motif. The drums are also very deep with some of the higher frequencies removed sucking the listener into the void. The drum sound meshes perfectly with the guitar tone never taking the lead but pushing the music forward. The bass in the vein of early Suffocation is deep and rumbling and loud enough to not hide within the guitar tone as it often provides a different melody then the guitar. Vocals are loud and powerful sounding like Ross Dolan from Immolation imitating Martin van Drunen from Asphyx. The album, though obviously recorded with the aid of digital equipment, forges its own character through particular production choices that seek to make the music audible but also to conviction to the themes of emptiness.

The compositions all seek to move forward in complete entropy and though the note selection is not atypical, Ectovoid has the startling ability to chain motifs together in unpredictable ways. Each song introduces a main motif that slowly mutates by changing the surrounding notes until the momentum has been entirely drained and a new motif is introduced. The new motif will maintain some of the same intervals as each section builds upon from the previous part. The band will use these compositional tools in a multitude of ways.

The selection of notes is derived from the “Finnish Death metal scale” which is essentially the minor pentatonic but with additional adjacent notes that can quickly be transformed into the harmonic minor scale like on the solo “Precipice of Absolute Chaos.” Dark Abstraction avoids obvious angular melodies in favor for more freedom in the way that melodies are made. The building blocks of these themes can be compared to lego in that the band will reuse the same minimalistic blocks to build large expanding structures that convey entropy beyond the scope of human understanding. With these blocks the band will create unity within the song by adding the blocks from previous motifs unto the new motifs as these arrangements are labyrinthine and show constant twists and turns.

The sheer range of techniques is also very impressive as the band transition from different playing techniques and tempo at will while never disrupting the flow of the songs. Asphyx’s The Rack (1991) seems to be the reference point for this compositional style especially during the slow parts where the power chords or the single notes are well emphasized on the upbeats sounding assertive and powerful where American bands like Incantation would make their slower parts much subversive and let them slither like a snake. Deep down below all surface traits we find a band that seeks to communicate these narratives in the same way that prime Voivod did but through the Death metal maze structure. Each song has an introduction that introduces certain themes and then the development of these themes before their reintroduction and the final conclusion. Although the band does show its influences, what is shown here is transmitted uniquely through their own inner musical identity and only uses their various influences as starting points to create something that may worship the same idols as all the young bands today, but it does so in its own irreverent way —free from all the noise of lesser bands and modern musical culture.

Ectovoid have impressed us with their second opus, and here at DMU we await to hear more from them and how they can continue to expand their style from Dark Abstraction towards new heights. A truly original band that can stand shoulder to shoulder with some of the older Death metal bands. They have found their own space in a scene that has been asphyxiating on its own feces for far too long and without turning to gimmicks, clichés or revivalism for a period they never knew personally. Through sheer passion and understanding of the genre Dark Abstraction is the best record of the genre in a very long time.